'It was a model that was created those three priorities that came out of the mayors round table all under one roof so when an individual enters that building they will be able to be seen and their issues addressed at one location'
0
Nov 26, 2019 4:00 PM By: Chris Dawson 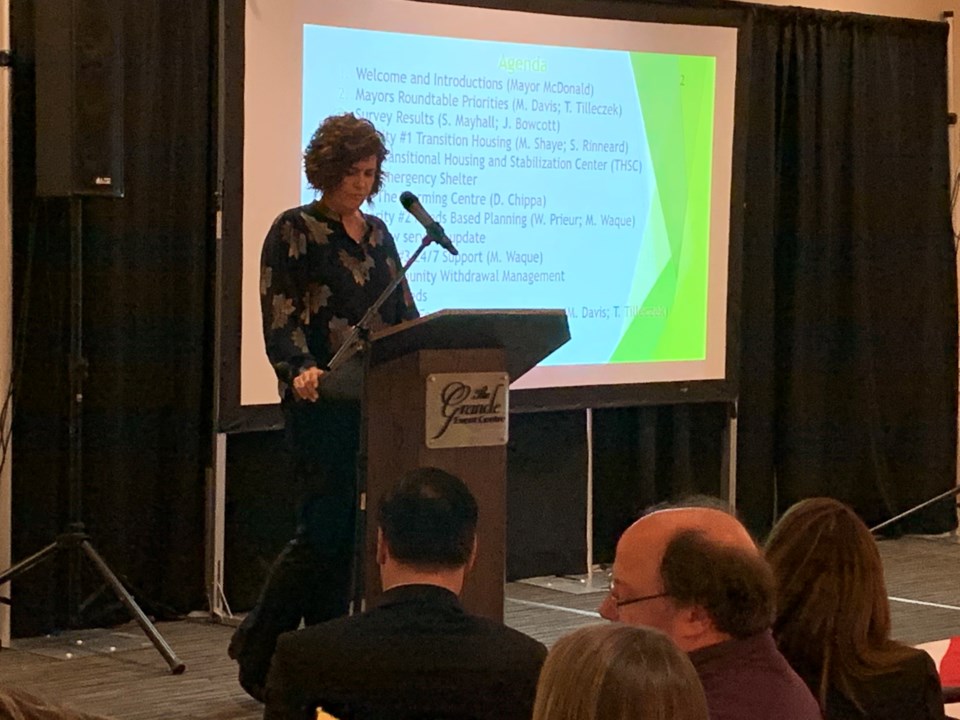 Mary Davis, Co-chair of the Roundtable and Executive Director of Nipissing Mental Health Housing and Support Services speaks during the release of the results from the Mayor's Roundtable. Photo by Chris Dawson/BayToday.

Hours and hours of work through 77 days and the Mayor's Roundtable Action Team came to fruition as the partners showed off a collaborative plan this afternoon at the Grande Event Centre in downtown North Bay.

That plan involved the creation of a new transitional housing stabilization centre which will help those who are at risk in the area.

"It was a model that was created from those three priorities that came out of the mayor's round table all under one roof so when an individual enters that building they will be able to be seen and their issues addressed at one location," explained Mary Davis, Co-chair of the Roundtable, and Executive Director of Nipissing Mental Health Housing and Support Services.

"Thanks to the many organizations and individuals who contributed to this plan over the past few months.  This is a major step forward in improving access to mental health and addiction programs and social services in our community," she continued.

One portion of that plan was already announced earlier this month when the former Gd2Go building on Main Street East was donated to add 18 more beds to the 12 already at the Gathering Place.  Those beds will eventually be transitioned to the new housing stabilization site in 2020.

"We made it very clear we were only going to have 12 beds at most. That is when it became a 'have to' so I think the City then said we have to solve this problem. So I think that is why you see there was a real priority put on it, because the city recognized that there was a real danger in not responding. I think that is why you see the urgency," said Dennis Chippa, Executive Director of The Gathering Place.

See related: Second warming centre to open in the City

See related: Homeless and poverty-stricken to be surveyed as part of Mayor's Action Plan

The team also released the results of a survey completed by People of Equal Partnership in Mental Health and the AIDS Committee of North Bay & Area, along with other service providers to help form the plan.

"We heard from respondents who told us their stories and what they believe needs to be done to improve the system," said Stacey Mayhall, AIDS Committee Executive Director in a release.

Mayhall says some of the key findings from that survey include the need for barrier-free housing and services in the community, as well as improved options for transportation and access. Another concern was the access to information and education on how to use the services that are in place.