'Things that are being done in communities around the world, we're trying to adopt that technology here to make North Bay a smarter, more efficient city. That doesn't happen when you're sitting at home.'
Apr 29, 2020 10:00 AM By: Stu Campaigne 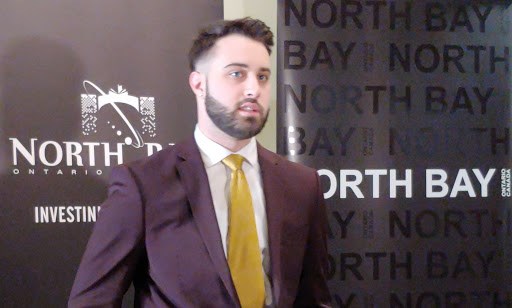 Marcus Tignanelli has ideas — lots of ideas — on ways to move North Bay forward and says he's willing to put in the time it takes to get things done.

When the mandated 2019 remuneration report for North Bay City Council was recently released, Tignanelli says he was taken aback by what it showed.

"I was shocked to see everyone else’s expenses."

Tignanelli was reimbursed almost $7,200 — nearly double the closest expense total for 2019 of just over $3,700 by Deputy Mayor Tanya Vrebosch. The first-term councillor says he was surprised to see he was on top in total expenses submitted through City Hall.

"To expense $7,200 out of a $130 million budget for the reimbursement of mileage, conference fees, continuing education, and hotels for economic development is an investment we need to make year after year. Businesses are not knocking on our doors, we must seek opportunity," he told BayToday.

Asked to provide a breakdown of his expenses, Tignanelli did not hesitate.

"I’ll have to pull it up to make sure I don’t miss anything," he responded. "I also think the public should know what economic attraction costs."

An avid traveller, Tignanelli was asked if the City of North Bay paid for any of his trips outside of the country.

"No, the City has not funded any travel. The City has funded continuing education in municipal and local economic development — which is extremely important to have knowledgeable people."

What about speculation Tignanelli visited the Middle East on the taxpayers' dime?

"The Israeli trade mission, I paid for my own flight. The only thing the City paid for was my hotel and conference registration during a portion of the conference. The hotels around [those dates], I paid for on my own."

City of North Bay Communications Officer Gord Young confirms the 2020 municipal budget has an approved total of $50,000 for Council expenses and the Chief Administrative Officer has the authority to approve the expenses. All expenses are pursuant to the City of North Bay Travel and Expense Policy.

Young says some reimbursements are processed in advance of the expensed event, such as registration fees and travel expenses outside of the country. Expenses submitted by council members after the fact include such items as meal allowance (maximum $50 per day), mileage allowance (50 cents per kilometre), and hotel expenses.

"Members of Council submit expenses to the Office of the Clerk for reimbursement. Travel such as attending municipal conferences like those organized by the Association of Municipalities of Ontario or the Rural Ontario Municipal Association would be approved without question," advises Young. "In cases that aren’t as clearly defined, members of Council would be required to demonstrate that the travel would be a benefit to the City. Approval would be at the discretion of the CAO and the same criteria would apply whether the member sought reimbursement in advance of the travel or afterwards."

Young adds, in 2019, "All expenses that were submitted were deemed appropriate."

The upstart city councillor has attracted his share of critics. He says he understands that comes with the territory. Not only does he have big ideas, but he also has no problem sharing his vision for North Bay in meetings, in person, or via social media. Tignanelli has a consistent online presence and his opinionated views can make him a target for public scorn.

He says none of it fazes him. One cannot go one minute in speaking with Tignanelli without hearing the word "innovation." He says he sees a better, more effective way to govern leaning heavily toward economic development.

"What sectors should we be focusing on? Instead of trying to catch any fish we can, what sectors work for North Bay, so we're not just targeting anyone."

Tignanelli says his travel has fostered contacts with economic development professionals not only across the province but around the world to brainstorm and bounce ideas off.

"When I went to Israel on the trade mission, I met with the technology sector and now we're looking at how we can get artificial intelligence into our traffic lights here in North Bay, city-wide free WiFi, and autonomous transit buses."

He says his experiences have made him a firm believer in urban tech. The councillor's proposal to add an innovation officer to the City of North Bay elicited online reactions from commenters — especially at the proposed $186,000 cost for the position. Tignanelli says such a move should be just the beginning.

"Things that are being done in communities around the world, we're trying to adopt that technology here to make North Bay a smarter, more efficient city. That doesn't happen when you're sitting at home."