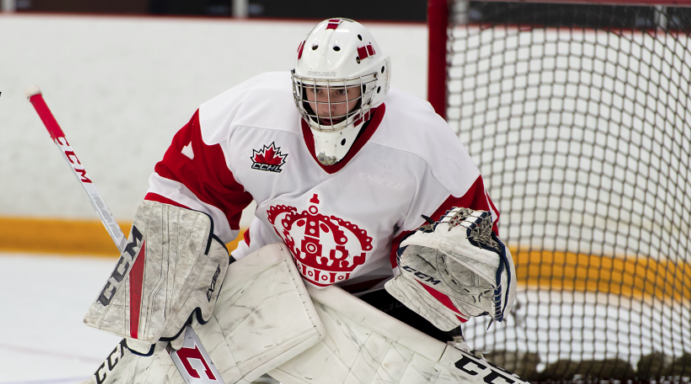 Reece Proulx is a late addition to Team East for the CJHL Prospects Game.

A trio of former North Bay AAA Trappers will be reunited at the CJHL Prospects Game which takes place on Tuesday in Hamilton.

Cole Craft, a forward with the Rockland Nationals, Ben Brunette, a defenceman with the Carleton Place Canadians, and Reece Proulx, a Battalion prospect playing with the Pembroke Lumber Kings will play for Team East at the event which will be held at the Dave Andreychuk Arena in Hamilton.

Craft, who won Silver with Team Canada East at the World Junior A Challenge in Dawson Creek in December, was named to the team in mid-December.

Through his first 37 games with Rockland of the CCHL, Craft has 18 goals along with 24 assists for 42 points.

Brunette has three goals and 11 assists for 14 points in 42 games with the Canadians. He is also an NCAA Division One commit with UMass-Lowell for the 2021 season.

Proulx. who was named to the team on Friday, replaces Tommy Da Silva who has left his former club, Panthères de St-Jérôme, (LHJAAAQ) to join a team in the Quebec Major Junior Hockey League.

In his first year with Pembroke, the 17-year-old North Bay, Ont., product leads all CCHL rookie netminders in both goals-against average (2.68) and save percentage (.924).

Those numbers also place him fifth among all CCHL stoppers in average and second-best with his save mark.

Proulx also sits third in his league in victories with 17 and is tied for second in shutouts with two.

Each of the players chosen to participate in the CJHL Prospects Game were selected through the efforts of NHL Central Scouting and are currently among the top 40 CJHL prospects heading into the 2020 NHL Draft, June 26-27, in Montreal.

The two teams in the contest are broken down geographically with the top prospects from the Eastern Canada Junior A teams up against the best from the West.