This year marks the 80th anniversary of the Battle of Britain 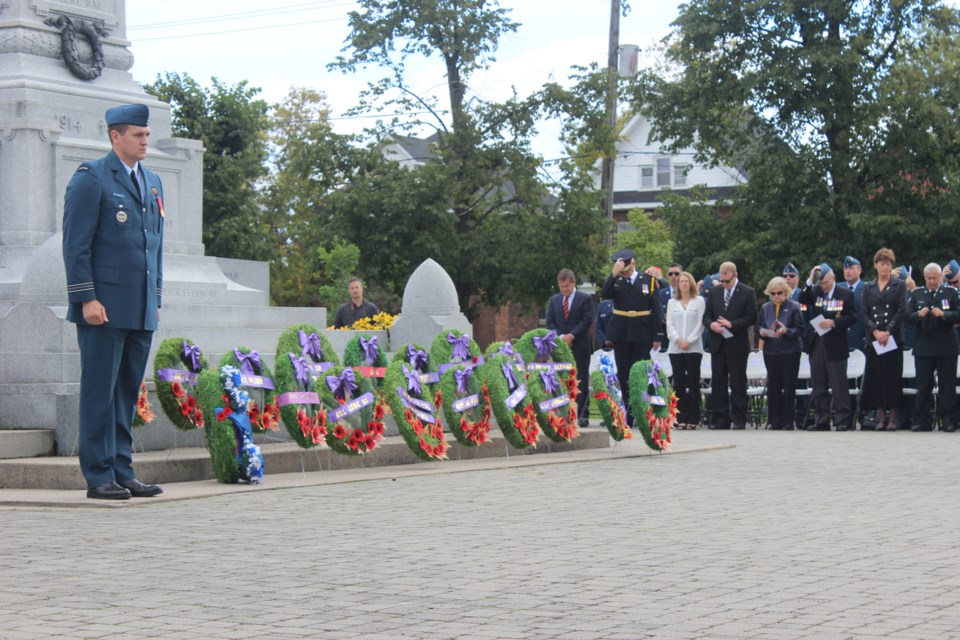 A wreath ceremony was held during the memorial services for the Battle of Britain. File Photo by Ryen Veldhuis.

There are no local ceremonies planned that we are aware of, due to COVID-19, but a significant milestone has been reached.

This year marks the 80th anniversary of the Battle of Britain. From July to October 1940, a small group of Allied fighter pilots took to the skies in the face of a far larger German Luftwaffe.

“It was the first major battle in the history of warfare fought exclusively in the air, and as our Canadian pilots joined their Allied comrades high above the United Kingdom and the English Channel, they did so with the knowledge that only victory could help prevent a German invasion of Britain.

“While 23 Canadians made the ultimate sacrifice in that struggle, the Allied efforts in the Battle of Britain helped thwart a seemingly unstoppable German air force and, in what would become a key turning point in the Second World War, the planned enemy invasion did not move forward.

“As Prime Minister Churchill said of those aircrews, “Never in the field of human conflict was so much owed by so many to so few.”

“Canada’s role in the Battle of Britain reflects a commitment to collective defence, and of service, bravery and sacrifice that continues to be upheld by the members of the Royal Canadian Air Force today.

“We must always remember the sacrifices of those who step forward in service of Canada, and honour them for their commitment to the values we hold dear.

Missing bell remains a mystery at St. Andrews spire
Oct 27, 2020 2:00 PM
Comments
We welcome your feedback and encourage you to share your thoughts. We ask that you be respectful of others and their points of view, refrain from personal attacks and stay on topic. To learn about our commenting policies and how we moderate, please read our Community Guidelines.