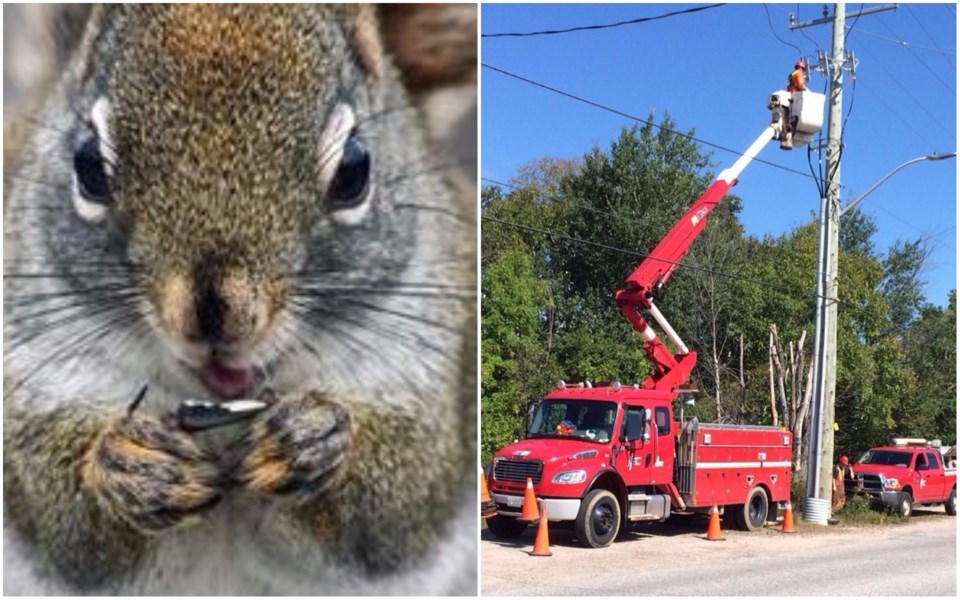 One of the leading causes of power outages in North America are squirrels. File photos.

When your lights dim, the show is over. Another squirrel's personal highway to collecting nuts has failed the furry creature in the most shocking way.

If North Bay Hydro has its way, nuisance outages caused by the electrocution of small animals will continue to be reduced by work being done to rectify a design flaw on the rebuilt substation. That substation "has proven vulnerable to animal contact, which in turn has led to over six long-duration outage events in the past seven years," according to a North Bay Hydro Facebook post, Thursday.

The post specifically mentions Pinewood residents and informs that "the new infrastructure will eliminate exposure and further increase reliability and help ensure lower future operational costs. This work should be completed before year end. In the interim, other substations are supplying the impacted area."

North Bay Hydro has upgraded the majority of what was once an aging and outdated system. Some of the infrastructure in the Pinewood area was 60 years old, and as a result, back lot poles, wires, and the substation were updated.

"The improvements were implemented to replace end of life infrastructure at high risk of failure, and ensure accessibility and continued reliable operation of the electrical system supplying the neighbourhood," reads the release.

System issues due to electrocuted small animals, notably squirrels, are common during the warmer months. Deadly interactions for wildlife can cause failures in the power supply, and occur with more frequency as the squirrels are busier in summer.

Our colleagues at GuelphToday investigated outages caused by squirrels in July 2016, and Sandy Manners, Guelph Hydro director of corporate communications noted at the time that there was an increase of calls relating to "short outages." These short blips in the power supply are commonly the result of instant death for the animal. The longer disruptions usually result from an electrocuted animal's carcass remaining on the apparatus. This requires a service call to remove the animal.

Manners also noted that with today's technology, a power interruption does not simply cause a resident to reset a clock or two. Said Manners, there is "sophisticated telecommunications equipment that can go off-line when a squirrel, bird or other animals cut the power. Raccoons, mice, and snakes can also get electrocuted when they come in contact with electrical equipment such as circuit breakers."

In fact, squirrel calls in North Bay are down this year, according to one North Bay Hydro representative, but the busy season does tend to run from June to August. Manners, in the same interview with GuelphToday, pointed out that, "Squirrels are one of the leading causes of outages across North America, and account for about half of outages in Guelph."

Guelph Hydro has begun to take steps to ward off the animal issue. Manners relayed that the "installation of longer insulators on power lines, replacing steel equipment with non-conducting fiberglass equipment, and installing wildlife protection covers and insulated wires on all transformers, as well as on lines where there are large trees," has taken place over the last several years.

Unfortunately, some of the measures being taken in Guelph do not translate to the North Bay setup. Said the same North Bay rep, "We have not installed guards or larger insulators. It is an impossible issue to mitigate with an overhead system."