'I thought the goal with three seconds left at the end of the (first) period was a deflating one and we never could seem to really turn our heads to get back in the game after that'
Oct 19, 2019 1:04 AM By: Matt Sookram 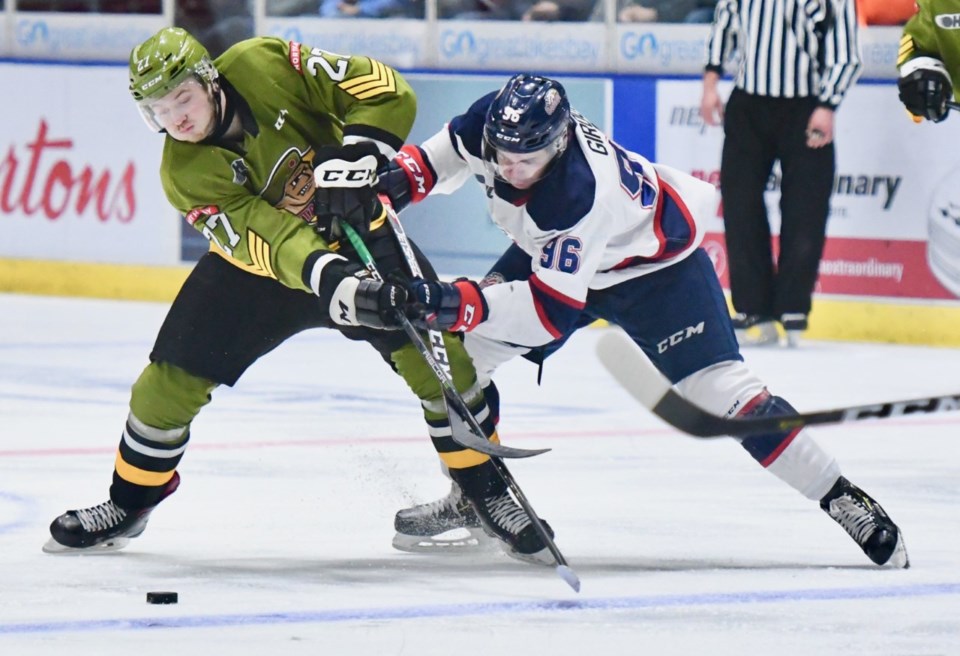 For the first 19:56 of the game, the North Bay Battalion and Saginaw Spirit were scoreless.

Then Blade Jenkins (4) received a pass from behind the net by Cole Coskey and sent it into the Battalion net behind Goaltender Christian Cicigoi.

It was 1-0 with just 3 seconds remaining on the clock in the first and despite the Battalion coming out and getting a goal at 2:04 into the second, Assistant Coach Adam Dennis says it never felt like the Battalion were ready to go.

“I thought we chased the game from start to finish it was a very forgettable night,” said Dennis.

The Spirit went on to score six goals in the second period, en-route to a 9-1 victory, which halts the Battalion two-game winning streak. Saginaw (7-4-1-0) remain at the top of the Western Conference and displayed what’s gotten them there to this point; they have guys who can score, and they expect others to start scoring as well.

“I think there were a lot of battles that went their way,” says Dennis. “I thought the goal with three seconds left at the end of the (first) period was a deflating one and we never could seem to really turn our heads to get back in the game after that.”

Davis Codd (1) gave the Spirit the lead with his first career OHL goal just over two minutes after Luke Moncada (5) scored at 2:04 in the second period to briefly tie the game 1-1.

“You have to always believe that you can come back and win a game,” says Dennis when asked about the late goal in the first period.

“I’ve thought that most nights this year, when we’ve been down, we’ve had the character to pull out of it, and that just wasn’t there tonight.”

The goal from Porco would send Cicigoi to the bench and North Bay native Reese Proulx came in to make his OHL debut. He was called up earlier in the week after Joe Vrbetic suffered an injury during Mondays win over the Sault Ste. Marie Greyhounds.

“From the goalie out, we weren’t very good,” says Dennis.

The goalie change didn’t turn the tide for the Troops as Proulx allowed three goals on eight shots, although he did make some nice saves with the glove in the 14:50 of ice time he got, before the Battalion went back to Cicigoi to begin the third period, down 7-1.

“We have to be a little bit more mentally tough because you are in a game,” says Dennis. “And you have to have that fortitude to fight out of it, but they are a good team and it’s a good lesson for our guys and we have to learn from it.”

Porco was the only player to score more than once but one of eight players with multi-point games. Millman and Perfetti led the pack with one goal and three assists on the evening each.

The Spirit entered the game with the second-most goals scored in the OHL and finished as the league leader with 52 on the year, boasting five players who already have 10 points or more through the first 12 games and of the 14 players who have suited up in each of those games, all but two have recorded at least one goal.

The Battalion will look to move on from this loss as they get right back onto the ice in Flint on Saturday night.

“It was disappointing but I think it’s something that we can definitely learn from because we have a lot of character in that room,” says Dennis.

“The nice thing in hockey is you get a shot at redemption tomorrow night. So we’re going to try and forget about it quickly, look toward tomorrow and try to get two points.”

Ontario extends emergency orders
Jul 9, 2020 7:44 AM
Comments
We welcome your feedback and encourage you to share your thoughts. We ask that you be respectful of others and their points of view, refrain from personal attacks and stay on topic. To learn about our commenting policies and how we moderate, please read our Community Guidelines.