The volume of sleds on area lakes may increase after the North Bay Parry Sound Health Unit yesterday ordered all OFSC trails closed effective midnight tomorrow. That could drive many sledders off the trails and onto waterways
Jan 19, 2021 2:00 PM By: BayToday Staff 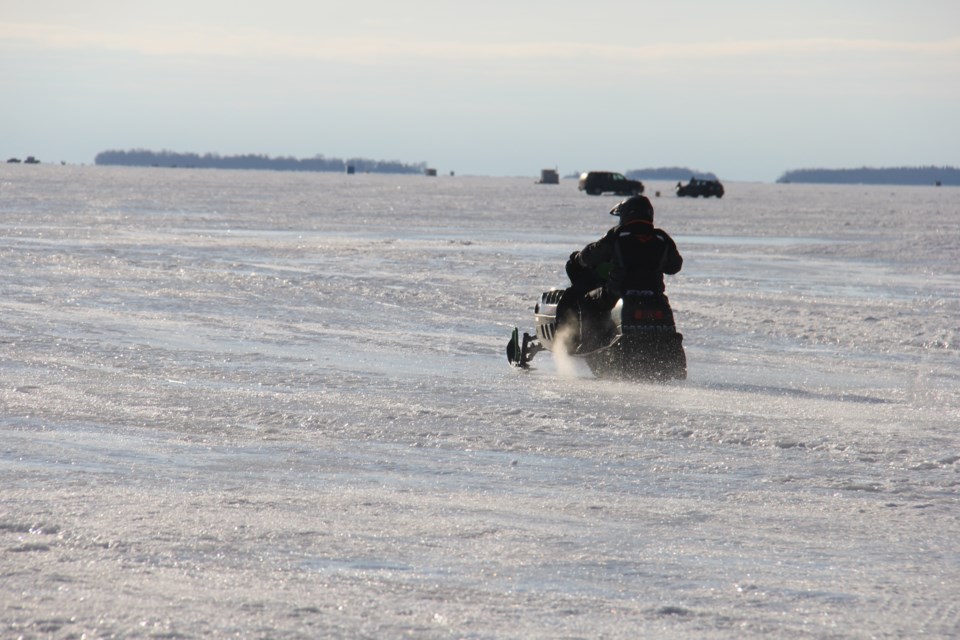 A snowmobiler speeds across the ice on Lake Nipissing. Photo by Jeff Turl.

Two fatal snowmobile accidents over the weekend have the OPP warning snowmobilers to stay off frozen waterways, while the Ontario Federation of Snowmobile Clubs (OFSC) urges them to stay off closed trails.

The volume of sleds on area lakes may increase after the North Bay Parry Sound Health Unit yesterday ordered all OFSC trails closed effective midnight tomorrow. That could drive many sledders off the trails and onto waterways.

With Snowmobile Safety Week now underway, the OPP is reporting that six people have lost their lives in snowmobile accidents so far this season. On Sunday, January 17, three people died in two separate accidents after their snowmobiles broke through the ice on Georgian Bay.

"These latest incidents are a tragic reminder of the serious risks associated with snowmobiling on frozen waterways," says Chief Superintendent Rohan Thompson. "Approximately 40 per cent of OPP-investigated fatal snowmobile incidents in the last 10 years have occurred on lakes and rivers.  Excessive speed, driving too fast for the conditions, and alcohol/drugs are other top contributing factors in snowmobile deaths."

"Our mild winter makes it particularly important for snowmobilers to regularly check the OFSC Interactive Trail Guide to get information about trail openings and closures," adds Lisa Stackhouse, OFSC Director of Communications. "Snowmobilers are reminded that it is unlawful and unsafe to ride on closed OFSC trails."

An OPP release says during the campaign and throughout the snowmobile season, OPP officers will be visible conducting enforcement throughout the province, focusing their attention on safety violations and impaired driving investigations. Mandatory Alcohol Screening authorizes officers to demand a breath test from snowmobile operators without requiring suspicion that they have consumed alcohol.