'The biggest message today is that we are paying close attention to what they plan to do with health care'
Nov 15, 2019 5:39 PM By: Chris Dawson 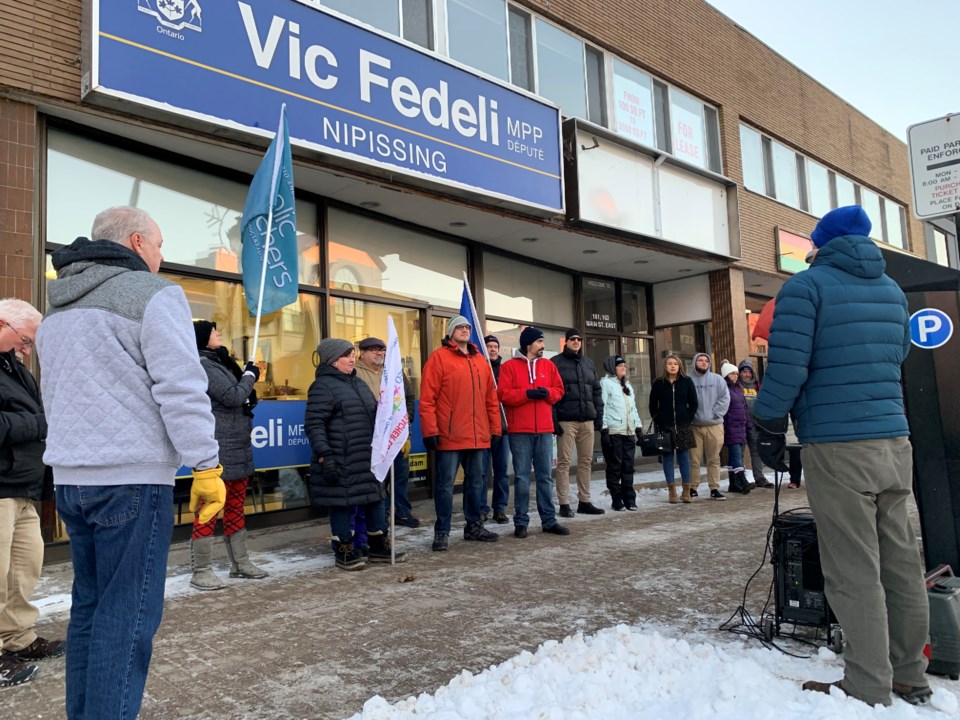 A small crowd of about 20 people gathered outside Vic Fedeli's constituency office for a Resistance Rally hosted by the North Bay & District Labour Council.

The rally, which lasted about 20 minutes highlighted concerns from union supporters with most of the focus on education from the handful of speakers.

"The biggest message today is that we are paying close attention to what they plan to do with health care," said Hunt at the end of the short rally.

"I think the download of the costs to municipalities to the tune of about 30 per cent is going to be huge and we are waiting to see what that is going to amount to.

"As far as health care goes we are waiting to hear how they are going to roll out what that means for workers, it is too early to tell and we are concerned that they are going to do one of those 'head for Christmas break, then drop a couple of bombs' and say they are going to get back to work after Christmas in late January and give very little time for the public to consult about the legislation."

Hunt believes that's the pattern of the Ford government.

"All the education unions are in a position of bargaining so they have potential job action dates coming up so I think everybody is waiting to see what is going to happen," Hunt said.

Hunt doesn't want people to believe the small numbers at this rally are a sign that people are content with the Ford government.

"It is not a sign that people are not interested, it is just tough for the people to find the time to come to these things, to be involved, to continue to resist the policies of this government. When they are impacting us on a daily basis it is difficult," said Hunt.

In a statement, MPP Vic Fedeli says their numbers show a clear investment into education and health care

“We are investing $1.9 billion more on health care and $1.2 billion more on education than what was being spent when we took office – all while putting our province back on a secure financial footing," said Fedeli in a statement.

"Our plan also invests an additional $1.3 billion in critical public services this year – a further increase in spending compared to our 2019 Budget.”