Barrie police have also received tips from people whose loved ones were at rally; 'COVID-19 has obviously divided families,' says official
May 10, 2021 7:58 PM By: Marg. Bruineman 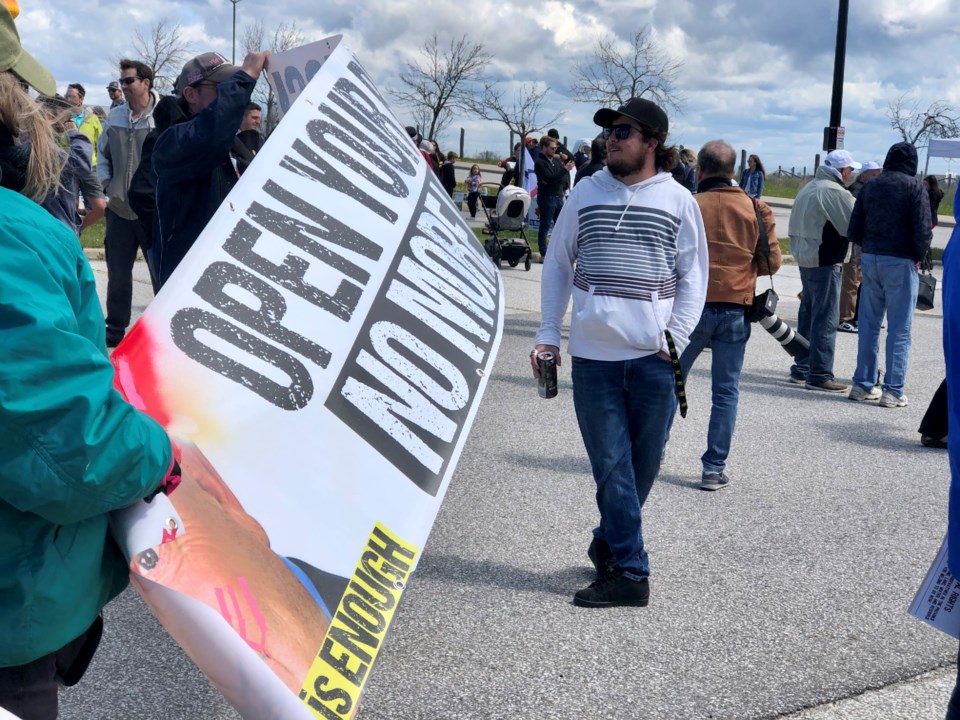 Anti-lockdown protesters hold a demonstration in the Sadlon Arena parking lot on Saturday, May 8.

Barrie police say they continue to follow up on the people who attended Saturday’s anti-lockdown rally.

Five people who were on hand at the parking lot of Barrie’s Sadlon Arena on Saturday were handed tickets each totalling $880 each and the anticipation is more of the 350 people who attended will be fined, although police did say earlier they would be focusing their efforts on organizers.

“They were very, very well behaved,” said Barrie police communications co-ordinator Peter Leon. “And that makes our job a little bit easier. But it doesn’t take away from the fact that it’s an unlawful gathering.

“Somebody needs to be held accountable," he added.

Tyler Nicholson, organizer of what has become the weekly Barrie Freedom Rally which is billed as a festival-like family event with bouncy castles and hot dogs, said he has not been affected by the lockdown because he’s been identified as an essential worker in construction.

But he’s offended that there’s such a designation along with the restrictions imposed as a result of the pandemic.

Nicholson said he’s not concerned about the tickets and has ticked off the option to appear in provincial court. He has also been issued court summonses.

He says he intends to bring a constitutional challenge and expects the tickets to be tossed out. The temporary emergency legislation, Nicholson said, doesn’t supersede the Canadian Charter of Rights and Freedoms.

“I’d gladly go to jail if it meant that I can give a child even a few hours of normalcy in an environment where they can be a kid and not be penalized,” he told BarrieToday. “I have no shortage of legal support.”

Leon said police are receiving help in their follow-up to the event. A family member of someone who attended the rally and spotted them in the news coverage reached out to Barrie police to identify that person.

“We’ve actually received some information that came in over the weekend,” said Leon. “COVID-19 has obviously divided families.”

About the Author: Marg. Bruineman