Northern Ontario has some of the highest opioid death rates in the province and a motion on the table would ask the region’s health units to band together to resolve the 'deepening crisis’
May 18, 2021 6:00 PM By: Len Gillis, local journalism initiative reporter 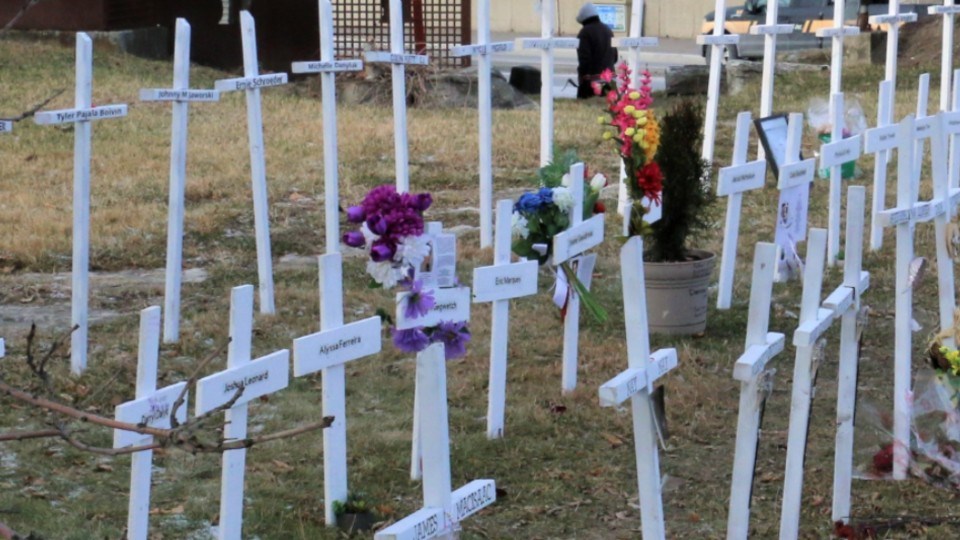 The white crosses memorial to those lost to the opioid crisis in the region can be found at the corner of Paris and Brady streets in downtown Sudbury.Len Gillis / Sudbury.com

Public Health Sudbury and Districts (PHSD) has prepared a motion called Sounding The Alarm that describes the current crisis in opioid overdoses and calls for action by exploring the idea of a coalition of Northern Ontario health units to investigate strategies since the Sudbury jurisdiction currently has the highest opioid death rate in Ontario.

The motion on the table is discussed as a possible course of action that might be approved by the PHSD Board of Health, which is scheduled to meet this Thursday, May 20.

The current opioid crisis is one of the key items on the agenda, especially since recently released figures show that the rate of deaths attributed to opioid overdoses in the PHSD jurisdiction nearly doubled in 2020 when compared to the number of overdose deaths in 2019.

The statistics gathered by PHSD showed that 105 people died in the PHSD jurisdiction in 2020, nearly double the death rate of 56 people, who succumbed to overdoses in 2019 in the Sudbury area. In 2018, that number was only 32 deaths.

The numbers are in line with a Sudbury.com news report published back in December showing Sudbury's overdose rate three times higher than the national average.

The motion prepared for Thursday's meeting notes that Ontario Public Health Standards require boards of health to collaborate with local partners in health and other sectors to develop programs and services that address substance use patterns in order to reduce the problem.

The motion also mentioned that Public Health Sudbury has been working toward resolving the drug crisis on several fronts, including the search for a supervised substance consumption site, but notes the process has been held up by the inability to secure a location.

The motion further stated that the "recent tragic death statistics are a resounding alarm for the need for all parties to double down on efforts currently underway and to explore innovative approaches — addressing immediate, medium- and long-term issues to save lives, prevent opioid use, and end stigma."

With that in mind, the motion stated "the Board of Health affirm that the local opioid situation is a deepening crisis and direct the Medical Officer of Health to intensify local work with partners to explore all options to address immediate, medium- and long-term opioid-related issues; and further that the Board direct the Medical Officer of Health to explore a north or northeast regional coalition of public health, relevant community agencies, and others as appropriate, in order to amplify regional concerns and investigate potential strategies and resources."

Thursday's agenda also has a report from the Medical Officer of Health Dr. Penny Sutcliffe that addresses the effort to find a venue for a supervised consumption site. The search has been underway for more than six months. In her report to the board, Sutcliffe said PHSD is seeking help from the city in this respect.

"The Community Drug Strategy Executive committee met twice in the spring to continue the search for a location for the supervised consumption services, and city staff have been approached to assist in the search for available spaces," said part of her report.

It was the final paragraph in Sutcliffe's report that hammered home the urgency of the opioid crisis in the Sudbury District.

"From January to December 2020, there were 105 deaths in the area covered by Public Health Sudbury & Districts compared to 56 people during the same period in 2019. Based on this current preliminary data, Public Health Sudbury & Districts is the region with the highest death per capita in the province for its second consecutive year, at 52.4 per 100,000. The provincial rate is at 16.4."

Thursday’s meeting of the local board of health is a public event that will be featured online and can be accessed from the PHSD website. The meeting is a virtual event that begins at 1:30 p.m.