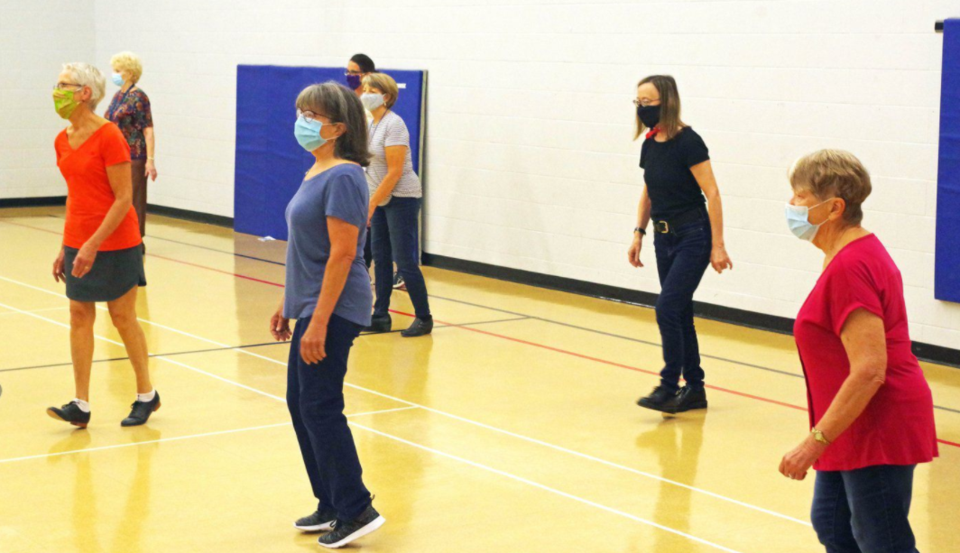 250 Clark, the municipal building in Powassan that's a hub for hundreds of activities in the community, has been slowly re-opening this month as COVID-19 rules ease in some instances.

When concern began growing about the pandemic earlier in the year, Mayor Peter McIsaac shut down the facility on March 12, a week before most other communities began their own lockdowns.

Although the fitness centre at the facility reopened in August and undergoes extensive cleaning throughout the day, other programs 250 Clark offers remained shut down until this month.

Kathie Hogan, the events coordinator at 250 Clark, says once kids went back to school, the facility began offering some of its programs.

"We restarted, but with certain criteria in place and the programs that resumed were of the low-risk, low-equipment types," she explains.

Line dancing, seniors' fitness and yoga were among the first activities to resume, Hogan says.

The activities are spread throughout the day and there's very little that has to be sanitized in these instances because of the nature of the activities.

That includes the yoga mats.

"We don't need to sanitize them because the mats leave with the participants," Hogan explains.

"We also resumed zumba classes because there is no equipment involved and it's easy to socially distance."

One major activity that is still some months away from resuming is card playing for seniors because players need to handle the cards, and in a COVID-19 era that may create health issues, Hogan says.

Under newly introduced rules at 250 Clark, participants in a later class wait for members of earlier classes to leave before arriving so there's "no cross contamination in the foyer," Hogan says.

She says there was an air of excitement when classes resumed this month, and this was clearly evident among the line dancers.

When COVID-19 resulted in lockdowns, it not only created a social-distancing scenario, it also resulted in emotional distancing.

"Line dancing has been going on for more than 20 years. The dancers would meet twice a week and line dance for an hour," Hogan says.

"Can you imagine all of sudden not being able to see your friends or not having the connections."

When word got out that line dancing was resuming, Hogan says the members arrived and waited in the parking lot 30 minutes before the building opened on the first day back.

"They knew the building was still locked, but there they were in the parking lot with their masks on talking to each other because they were so excited," she recalls.

"It was like their first day of kindergarten, they were so happy to be here."

Hogan says line dancers take their activity seriously, but during the first few days at 250 Clark they kept talking to one another over the music because they were just glad to be back doing something they enjoy.

"Things are back to normal now in line dancing, but there are moments at work that you just treasure, and for me that was one of them," Hogan says.

As with seniors' card playing, there are other programs and classes that for now remain in limbo because of close contact issues.

Hogan says these include art, cooking and stained glass classes, lectures on nutrition and wellness clinics.

"People keep asking about them and we tell them they will resume, but it will take time," she says.

250 Clark is the former Powassan Public School the municipality bought and repurposed several years ago.

In addition to housing the fitness centre and several sections for numerous activities, the back of the building is reserved for municipal staff and council chambers.

"Since opening only a few years ago Hogan says 250 Clark has engaged a great number of people and the many "activities there have created communities for people.”

Big drop in Ontario's 10-year average in total number of forest fires this past summer
Oct 31, 2020 9:00 AM
Comments
We welcome your feedback and encourage you to share your thoughts. We ask that you be respectful of others and their points of view, refrain from personal attacks and stay on topic. To learn about our commenting policies and how we moderate, please read our Community Guidelines.