The farmstand tour is a collection of farmers who set up stands at their respective farms where the public can buy locally produced food
Jun 9, 2021 5:30 PM By: Rocco Frangione 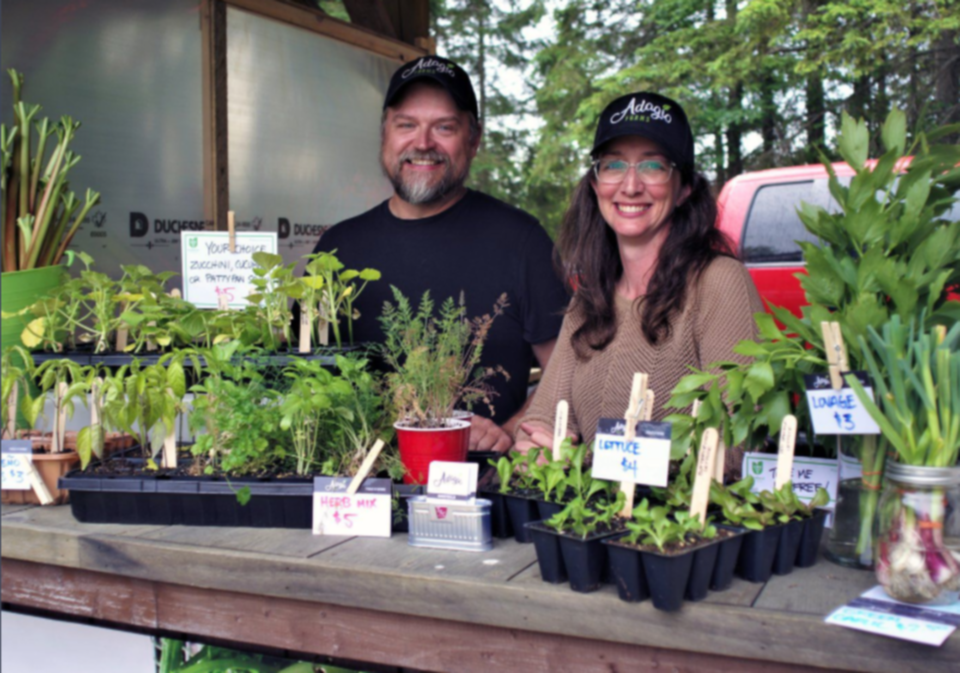 Katrina Violette says The Great Powassan and Area Farmstand Tour has just exploded with participants, largely due to the success of the tour during its inaugural year in 2020 and strong word of mouth. She and her husband, Ed, operate Adagio Farms. Rocco Frangione photo

The Great Powassan and Area Farmstand Tour is back for a second year, and the number of participants has more than quadrupled.

This year, that number jumped to 29 farms.

The farmstand tour is a collection of farmers who set up stands at their respective farms where the public can buy locally produced food.

Violette says last spring she and her husband put out a farmstand for the first time.

Other nearby farms had been doing that for years and Violette thought it made sense to host a more organized event.

Being relatively new to the area, Violette had no idea how many farmers were in the region. Larivee did because he's been around for a while.

She texted Larivee with the concept about creating a guide map of the participating farms for the public, putting forward the use of social media to attract consumer traffic to the farmstands.

The attraction exploded with people going to the various stands throughout the year.

Violette says another reason the event took off in its rookie year was because of Powassan's Events Coordinator Kathie Hogan, who got the word out to the various farm owners.

A Facebook page was also created and was named The Great Powassan and Area Farmstand Tour.

“The Facebook page became the platform where the producers advertise their goods,” Violette said.

The site has grown to 2,500 members so far, and Violette says in large part that's due to people talking about the farmstand tour on a regular basis.

“So the buzz grew and that's how more farmers became interested in it for this year,” she said.

Violette and Larivee started putting the map together which includes the names of the farms taking part, the variety of goods they sell, whether they have their own social media account and a phone number.

The maps can be printed off the Facebook site, but local businesses also have them available.

The farmstand tour runs until Thanksgiving weekend, and while some of the stands are open to the public every day, others are not.

Violette says the hours of operations for each farmstand are on the maps.

Violette says the phone number is included because consumers may want to call ahead just to make sure the farm has what they're looking for.

“If you're hankering for something specific, don't drive all the way out to a farmstand without checking ahead,” Violette said.

Additionally, the farmers are encouraged to advertise what they have available on the Facebook site.

Violette has also noticed a trend when it comes to the updates and it's something consumers may want to keep in mind.

“Last year we saw a flurry of posts on Wednesdays when everyone seemed to restock and then another flurry on Fridays or Saturday mornings,” she said.

Violette says it's not set in stone, but those appear to be the days when most restocking takes place.

Violette has noticed that as awareness grew of the farmstands, more people from beyond the Powassan region began showing up and buying food goods, including a number of residents from North Bay.

That's also helped create a small economic boost not only for the farm owners but also for the various businesses in Powassan.

Violette says when people head to the farmstands they also extend their stay a little longer during the day and sometimes have a bite to eat or stop by gift shops.

Violette says it's not offered, but there have been inquiries from people asking if a pick-your-own option is available like picking from apple trees.

The organizers of the farmstand refer to it as their “Happy Accident” because they “didn't have any concept that it would blow up to the size it has”.

And Violette has no doubt it will grow again next year.

“There were a handful of farms interested in the tour this year but they weren't quite ready,” Violette said.

“Will it jump from seven to 29 like it did this year? I don't think so.  But I think it will continue to grow.”