A six-year study found that elevated levels of carbon dioxide increase the growth of poison ivy
Jul 12, 2020 9:00 AM By: Lori Thompson 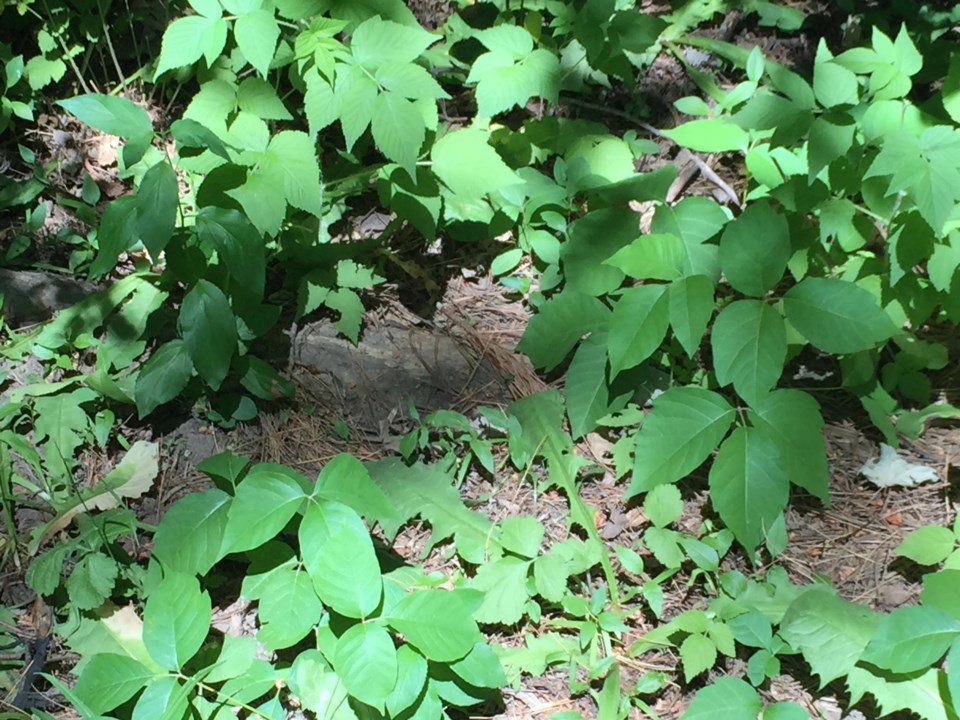 Leaves of three, let it be. Many of us were taught this rhyme as children to keep us on the lookout for the dreaded poison ivy plant. If you think you’re seeing more of it these days, it’s probably not your imagination. It’s also likely to be larger than you’ve seen it in the past and will cause a more potent rash.

Several Manitoulin Islanders have shared their recent experiences, saying they have reacted badly this year but have never experienced the painful, itchy rash previously. Brittany from Manitowaning had to bandage most of her leg. Bill P. said the usual patches near his property had spread, and the plants were looking very healthy.

A six-year study completed by Duke University researchers found that elevated levels of carbon dioxide not only increased the growth of poison ivy but those high carbon dioxide receiving plants produced a more potent form of urushiol. That’s the oil that causes the skin inflammation, Rhus-dermatitis, in 50 to 80 per cent of humans when they come into contact with the plant (only humans and apes react to urushiol). Urushiol is poison ivy’s defense mechanism.

Researchers pumped carbon dioxide into an intact forest ecosystem; under the elevated carbon dioxide conditions, poison ivy showed increases in photosynthesis, water use efficiency, growth and biomass. They found that at carbon dioxide levels expected by the year 2050, poison ivy in the forest grew at a 70 per cent higher annual rate than at the time of the study. That 70 per cent will rise if we keep polluting the atmosphere with greenhouse gas emissions by burning fossil fuels. Carbon dioxide is considered one of the leading causes of global warming.

Poison ivy is widespread, has many forms (vine, ground cover, upright) and can grow in many terrains. It can thrive in rich soil or nutrient poor soil, highly acidic soil or moderately alkaline soil, and in sun or shady conditions. It is often found at the edge of forests or along roadsides. Poison ivy establishes itself in disturbed areas, said Judith Jones, a biologist who operates Winter Spider Eco-Consulting.

You will generally find poison icy wherever humans have disturbed the land. It is possible that once established in newly disturbed areas elevated carbon dioxide levels will promote faster growth. She hasn’t noticed a correlation between a greater abundance of poison ivy and a warming climate but noted she hasn’t worked directly with the plant.

There is some evidence that poison ivy is drought susceptible and in most cases, will not survive extreme cold winters. An earlier report published in the Canadian Journal of Plant Science noted that sections of horizontal rootstocks and vertical stems of poison ivy were often winter killed in Canada, however experts are predicting warm winters in the future. Climate change will also lead to more and more frequent weather events such as wind storms that will reduce tree canopy and lead to the disturbed conditions that promote the establishment of poison ivy clusters.

Poison ivy is not all bad. It provides forage for whitetail deer, black bears and raccoons and several bird species eat the berries. During autumn when other food sources are scarce, poison ivy provides sustenance for Northern flickers, bobwhite quail, Eastern phoebes, cedar waxwings, woodpeckers, robins and other birds. Goats and other livestock can eat it as a low quality forage (urishiol won’t show up in their milk).

The researchers used poison ivy vines in their study; other invasive vining plant species that showed a similar response to elevated carbon dioxide levels are kudzu and honeysuckle. The expected increase in abundance of poison ivy and other invasive vines has the potential to affect forest dynamics as well.