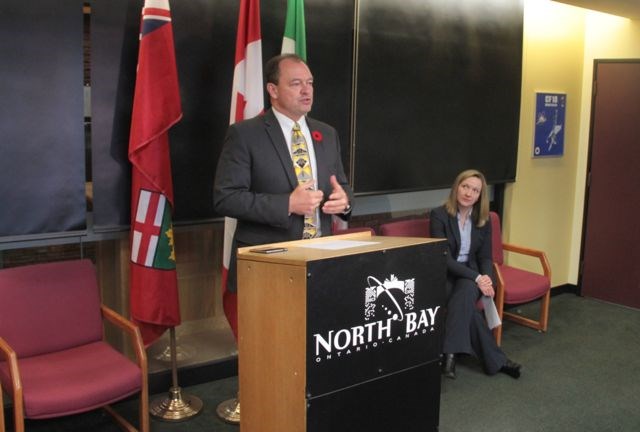 Mayor Al McDonald makes the announcement about a fundraiser to bring Syrian refugees to North Bay during a press conference on October 28th. Photo by Chris Dawson.

Officials at the Multicultural Centre believe the tragedy in Paris will not interfere with North Bay’s efforts to bring at least one Syrian refugee family to North Bay.

“I doubt the process will slow down,” said North Bay Multicultural Centre Program Coordinator Deborah Robertson in an email to BayToday.ca

“We are still waiting for confirmation of travel dates for a family of 13, currently living in a refugee camp in Lebanon.”

On October 29th, Mayor Al McDonald announced a fundraising initiative at city hall that gathered more than $36,000 to try and help bring at least one Syrian refugee family to North Bay.

On Monday in reaction to the terrorist acts in Paris, the Premier of Saskatchewan Brad Wall asked the federal government to suspend the Syrian refugee plan to bring 25,000 Syrian refugees to Canada by the end of the year

In the United States a number of states including Michigan, Alabama, Texas, Arkansas, Louisiana, Indiana and Massachusetts are suspending the acceptance of new Syrian refugees until a security review can be completed.

McDonald estimated the families would be here within one to four months at the October 29th press conference.

McDonald has called a meeting for Wednesday at noon for all those interested in volunteering to support the family once they arrive.