Opinion: Council wrong to double down and go it alone on new arena by using funds from the already strained capital budget 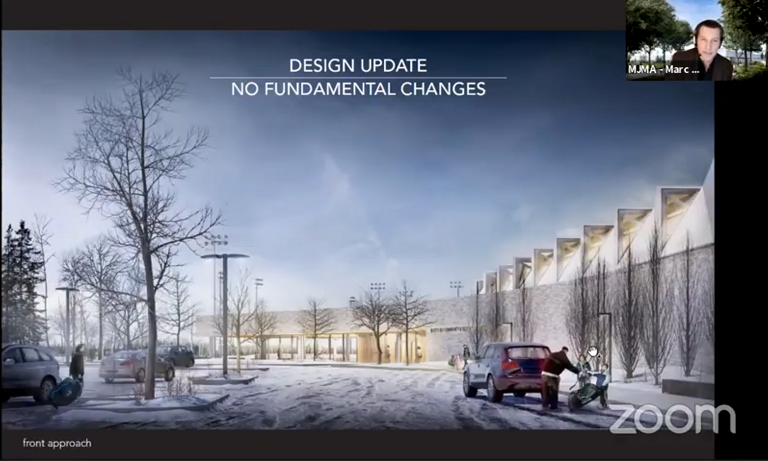 Renderings by MJMA Architects and Mitchell Jensen Architects of North Bay's proposed Community and Recreation Centre. Courtesy of the City of North Bay via YouTube.

During a special community services committee meeting on November 17th concerning the proposed new community centre at Omischl Park, architect Marc Downing was pleased to indicate that the project was now “shovel ready” and the construction documents have been prepared for the tender process.

Also during that virtual meeting, city engineering manager John Severino indicated staff will be presenting a plan to council to fund the project through modifications to the 10 year capital plan.

See: 'We can deliver' community and recreation centre 'on budget'

It is my opinion since the City of North Bay is the solitary funding participant in the above-noted project, the description “shovel ready” really has neither relevancy nor urgency.

Infrastructure Canada denied North Bay’s application for funding assistance some time ago, but it appears City staff is recommending that council double down and go it alone by using funds from the already strained capital budget. The capital budget, of course, provides funding for infrastructure investments and maintenance, such as the new intersection at Seymour and the bypass, road resurfacing ($4M per year), vehicle replacement, bike lanes, building repairs such as the new roof over the Capitol Centre or the Library renovations, etc. The estimated $35M price tag (if all goes according to the architect’s plan), spread over ten years would drain approximately $4M per year of capital.  So it will be interesting to see where and what city staff plan to eliminate from the long-term capital plan to accommodate the new hockey rink. Of course, there is also the possibility of increasing the tax levy!

I find it incredulous that, in the midst of a pandemic that is far from over, this is a priority at all! But since apparently it is, perhaps we need to backtrack.  Especially since federal/provincial funding was denied and the only shovel in the ground will be our own.

Flashback! At one time, during the arena process and MURF (multi-use recreational facility) studies, there were at least three private sector groups that showed an interest in participating in the community centre concept ….. The Pinewood Group, The North Bay Mall, and Paul Orsi’s Group.  Despite the private sector level of interest being demonstrated, the City, for reasons unknown, dismissed the idea outright.

So perhaps a pivot is in order?

The North Bay Mall proposal was a true community-centric vision. It included YMCA programming, a daycare centre, a true seniors activity centre (by the way 35% of North Bay’s population), and of course genuine “twin” ice pads that benefit from economies of scale not only on the build but also more importantly on the ongoing operations side. The proposal also signaled an interest from the proponent in participating in financing and operations.  (A good thing when you have no money!)

Fast forward.  Our world has changed forever.  As a City, we have new emerging priorities including senior care and homelessness.  No one can predict the eventual effect on City revenue streams, commercial assessment evaluation, increased expenses related to services, etc.  Are we really prepared and more importantly financially competent to go it alone?

So to Council, I urge you to seriously re-consider private sector participation in the creation of a true community-centric facility.  And if this pandemic has taught us anything, family and community are more important than ever.