'With the current makeup of tenants, it is completely possible to have ticket sales and baggage handling services available when passenger rail service is restored to our northern community'
May 11, 2021 7:30 PM By: Jamie Mountain 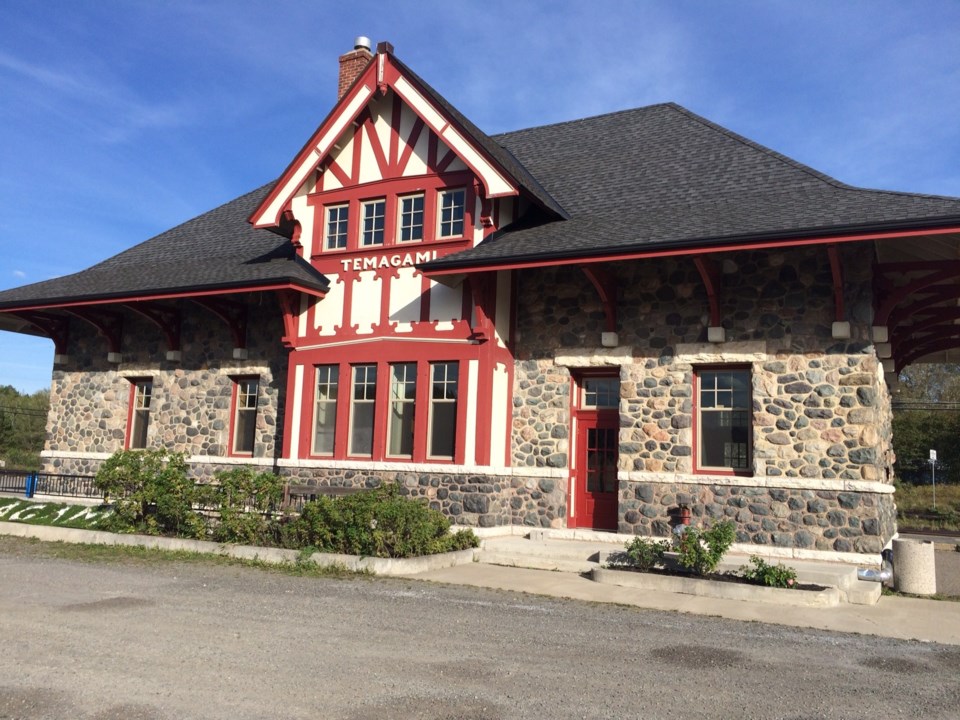 TEMAGAMI – It’s been nearly 25 years since the Temagami train station was an official stop of the Ontario Northland Transportation Commission but the building still serves many purposes today as an official landmark in the municipality.

The station was closed as part of Ontario Northland’s bid to cut costs at the end of June 1996.

It was built in 1907 and housed the office, telegraph and signal equipment, ticket counters and washrooms, and two waiting rooms.

It served as a stop for Northlander trains of Ontario Northland before the service was discontinued in 2012, as well as the seasonal Dream Catcher Express service.

Currently the train station houses organizations such as Living Temagami – Arts and Culture, the Temagami and District Chamber of Commerce and the Temagami Community Foundation.

The building serves as a community hub full of activity.

Living Temagami has been in the building since 2017 and has hosted many workshops and concerts inside.

While the COVID-19 pandemic has affected what the organization can offer in terms of events, positive things have still been happening in 2021.

"Behind closed doors we are working to become an arts hub for all of northeastern Ontario,'” said Living Temagami artistic director Chandel Gambles.

“That means all the artists from across the north would be represented digitally by us and we’re hoping to branch out so that whether you’re in Germany, or in Toronto, you know who the artists are in the region.”

Gambles added that Living Temagami continues to offer online programs for the rest of May and into June through the Ontario Ministry for Seniors and Accessibility.

“They have given us funding to run online programming, so we’ve been doing that all since February and that continues to run free online,” she noted.

The ever-popular Temagami Community Markets, which Living Temagami now oversees, will also run again this summer in the train station parking lot, according to Gambles.

“It will open July 3 and it will run every Saturday until September 4, that will be the last one,” she noted.

Temagami Mayor Dan O’Mara said the train station building has “become more of a point of interest or a draw to the community in the past couple of decades, since the halt of its original use.”

He also spoke to its role and importance within Temagami.

“A portion of the station is now being used as the Temagami Chamber of Commerce and Information Centre for the area. It is also being occupied by Living Temagami, a community arts and culture group that provides many social activities and programs, now virtually, to our community,” he said in an email interview.

“The station has played a key role in some economic development activities in the past, including the Dream Catcher Express, which brought many visitors to the area, providing a boost to the local economy. The yearly Saturday summer market is also held in the parking lot and many people just stop by and this station is unique compared to others that were built along the ONR Railway.”

He added that the building is “is one of our important landmarks that make up Temagami.”

Looking ahead, O’Mara said it’s difficult to imagine what the future might bring to the Temagami area.

But whatever that future is, he says it has been made “very clear” through past surveys that the community would like to maintain control and ownership of the train station building.

“With the current makeup of tenants, it is completely possible to have ticket sales and baggage handling services available when passenger rail service is restored to our northern community,” he said.

“It will be interesting to see what the results of the ONR survey will bring to our small northern Ontario municipality and I am hopeful that the importance of passenger rail service will be recognized and acted upon. “The building has received some recent upgrades so the building is sound and we should be able to enjoy the benefits of having such a building in our town for many more years.”

Jamie Mountain, is a Local Journalism Initiative Reporter with the Temiskaming Speaker