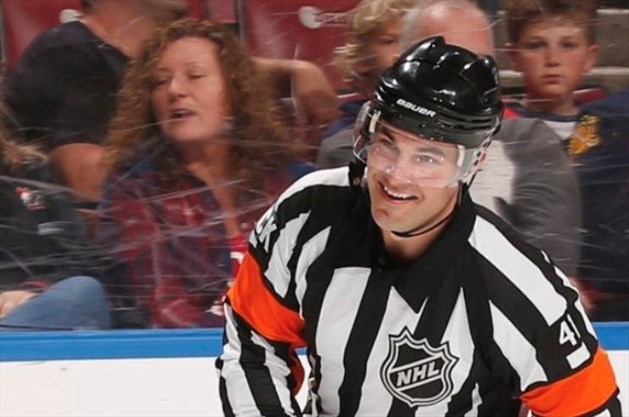 Conor O’Donnell’s road to the NHL has been unlike any other.

Four years as an OHL third-liner, winning a Memorial Cup with the Windsor Spitfires.

A pro season in Germany. Half a year in France.  A few months in the East Coast Hockey League before a trip to the Allan Cup with the senior ‘A’ Stoney Creek Generals and hanging up the gear at age 27.

So naturally, there was O’Donnell on Saturday night making his NHL debut at age 29, a taste of the NHL that probably wouldn’t have happened had he not come to North Bay for four years to play under Nipissing head coach Mike McParland.

O’Donnell, who collected 134 points in 108 games at Nipissing from 2010-14, put away his stick and gloves in the summer of 2017 in exchange for a referee’s whistle. On Saturday, after working 75 AHL games in his second professional season, he dropped the puck in Florida for the season finale between the Panthers and New Jersey Devils.

Behind the Panthers bench was Bob Boughner, who coached O’Donnell to a Memorial Cup with the 2009 Spitfires. Former Spitfires teammate Taylor Hall of the Devils, the NHL’s reigning Hart Trophy winner, was injured but came to the room after the game to offer congratulations.

“That was pretty cool,” O’Donnell said on Monday after working an AHL game in Cleveland. “Making my NHL debut and having those guys there, it made the day and night even more memorable.”

The rise to the NHL as a referee came quickly, but O’Donnell has put in a lot of work to show he belongs and there is more work ahead.

O’Donnell was first sold on Nipissing in 2010 (“Where the heck is North Bay?” he asked when McParland called) in part because of McParland’s hockey connections in Europe, where he coached for two decades.

“Looking back on it now, it’s a decision that helped shape my life and I look at Mike as almost like a second father figure,” said O’Donnell, a Hamilton native. “With Mike’s connections in Europe, I thought if I kept putting in the work and having good seasons, I could probably go play in Europe. At that point in my life, that was my main focus.”

McParland, a friend of North Bay’s Stephen Walkom, the NHL’s Director of Officiating, had also put it in O’Donnell’s ear to consider officiating. Walkom spends his summers in North Bay and asked McParland to keep an eye out for players who could make the transition to wearing the stripes – Walkom was especially an advocate of high-level players with good conditioning, who would be capable of keeping up with an NHL game getting exponentially faster.

After spending 2015-16 in Germany and starting the 2016-17 season in France, O’Donnell ended up in Colorado in the East Coast Hockey League, “but it wasn’t what I wanted.”

In the summer of 2017, McParland followed up with O’Donnell about officiating and O’Donnell soon got a call from Al Kimmel, the NHL’s director of scouting and development for officials.

O’Donnell attended the NHL Exposure Combine, figuring he might come out of it with some potential OHL work. Before he knew it, he was refereeing Toronto Maple Leafs rookie camp and got an offer to work games in the AHL for 2017-18.

“It all happened really quickly,” O’Donnell said. “When I was done playing, I was happy with what I had accomplished with my playing career – it’s not like I was saying, ‘I wish I was still playing.’ I looked at (officiating) like possibly the next chapter of my life. I love the game, so I thought if I could still stay involved in something I’m passionate about, what a great way to make a living.

“And to be honest, the first time I stepped on the ice for my first AHL game, I was super excited. I thought, ‘if this is something I can get good at, I’d love this.’”

The learning curve was steep for the first 15 games, but his skating and hockey sense helped him adapt quickly. He acknowledges it was a privilege to start in the AHL when so many are earning their stripes in lower leagues, “but I put a lot of work and time into my playing career, so I think that all kind of helped groom me for where I am today. From where I started to where I am now, I think I’ve come a long way.”

This coming from a guy who has chirped more than his share of referees. O’Donnell, who sometimes jokingly referred to himself as a “dishin’ magician” during his time as a Laker, racked up 261 penalty minutes in addition to 99 assists in 108 OUA games.

“I was a passionate player and also a guy who liked to have fun,” he said. “I built relationships with officials, but I’d also be the first one to tell a ref off. When I was playing, I never had that appreciation for officials. I thought what they did was easy.

“And doing it now, there’s so much more that goes into it – you’re on the ice for 60 minutes and not only are you physically engaged, you are mentally engaged the whole time, which is even more tiring.”

McParland, who spent a lot of time mentoring O’Donnell as a Laker and helping settle down an often charged-up player who was a bit rough around the edges, said he recalls mentioning to Walkom that if O’Donnell ever makes it, he has the right attitude and mentality to be a referee.

“I’m proud of how well he’s done,” McParland said. “He left here and played a real high level in Europe and played in the East Coast a bit and decided to take a look at the refereeing path. His talent, his skating, his conditioning and his wit and knowledge of the game, the whole package that he has, is giving him a chance to attain that NHL level.”

O’Donnell considers himself a good communicator whose personal hockey experiences provide him a better understanding of what the fourth-liner playing six minutes a game is thinking as much as the team’s top scorer.

“I honestly think it takes a certain personality to be a referee,” he said. “Not everyone wants 10,000 people yelling at them and not everyone wants the pressure of working a 2-2 game with five minutes left in the third, a guy breaking to the net and there’s a 50-50 call.”

O’Donnell worked 50 AHL assignments on a game-by-game deal in 2017-18. This season, he’ll do 80 AHL games in addition to his NHL debut, before getting some AHL playoff experience. Should the progression continue, O’Donnell could work his way into a handful of NHL games next season with more of a chance to prove himself in ensuing years.

Shortly after he received his NHL assignment last month, O’Donnell reached out to McParland, again grateful for helping open this new door in hockey.

“Going to Nipissing and meeting Mike, I think really put my life in a certain direction,” he said. “If I never went there, who knows what I’d be doing right now? As much as I’ve worked hard for where I’ve got, I thank Mike for everything he’s done to help me out.

“I’m super happy and it’s a good spot to be in right now and hopefully, I can keep things going and keep progressing.”

About the Author: Ken Pagan

Ken Pagan is a former sports editor, reporter and avid supporter of local sports who lived in North Bay from 2002 to 2012.
Read more