NHL official gets into the North Bay Sports Hall of Fame 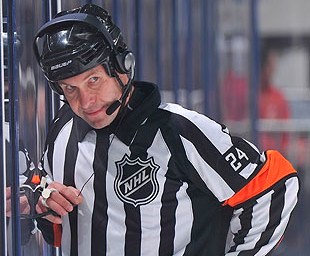 Referee Stephen Walkom waits on the final decision about a possible high-stick goal scored by the Columbus Blue Jackets against the St. Louis Blues during the first period on April 12, 2013 at Nationwide Arena in Columbus, Ohio. File Photo by Jamie Sabau/NHL

Longtime NHL official Stephen Walkom has been recognized and has been named an inductee into the North Bay Sports Hall of Fame.

The North Bay native joined the NHL officiating ranks in 1990 and was considered one of the NHL's top-ranked officials during his on-ice tenure.

The Current NHL director of officiating quit his duties as an on-ice referee in 2013.

The Inductees and Award winners will be honoured at the 40th Annual North Bay Sports Hall of Fame Induction and Awards Dinner on Saturday, May 2 at the Davedi Club on Airport Road.