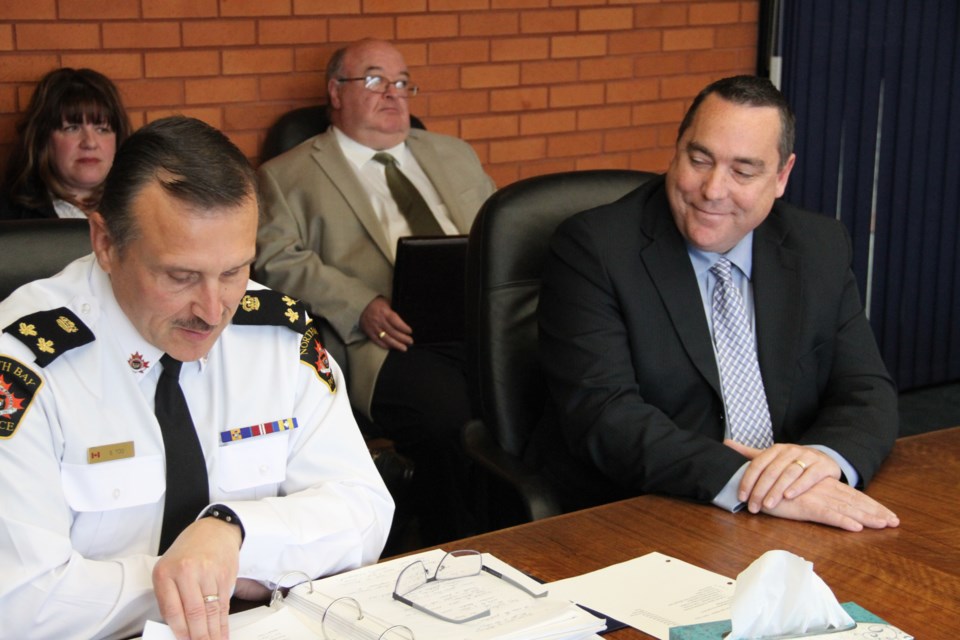 Michael Daze, still not in uniform, attended his first police board meeting since he was named the new North Bay Deputy Chief back in April.

Daze, who spent 17 years with the Owen Sound Police Service will take over from Deputy Chief Scott Tod who will move into the Chief’s role officially in June.

“He was a very significant major crime investigator in the Owen Sound area so I think bringing all those things to North Bay was very important and having an outside perspective in what has happened in other places may be a benefit,” said Tod, who did not know Daze prior to the hiring.

Daze believes working with the community is key.

“I think it is really important that the community and the police have a good foundation and a good trust,” said Daze.

Daze believes he brings with him a lot of experience in major crimes and he feels he has a good understanding of the problems that face policing this day and age.

He is also aware of the opioid issue in North Bay, but he says we are not alone.

“The opioid issue is a crisis right across Canada. It is sweeping everywhere and certainly it is a crisis we were facing in Owen Sound and it is not something one police agency can do on their own to combat,” he said.

“You really have to pull together as a community and look and see what are the resources we have here, and how do we work together so that we can have an integrated network of support.

“I am aware of the crisis that exists here and, you know, I think a collaboration between agencies including police and some of the social services to try and tackle it is something we will continue to do and move forward.”

Daze will be sworn in during a ceremony at the Grande Event Centre in downtown North Bay next month.

Will sunshine be the theme of North Bay's summer?
Jun 5, 2020 10:00 AM
Comments
We welcome your feedback and encourage you to share your thoughts. We ask that you be respectful of others and their points of view, refrain from personal attacks and stay on topic. To learn about our commenting policies and how we moderate, please read our Community Guidelines.