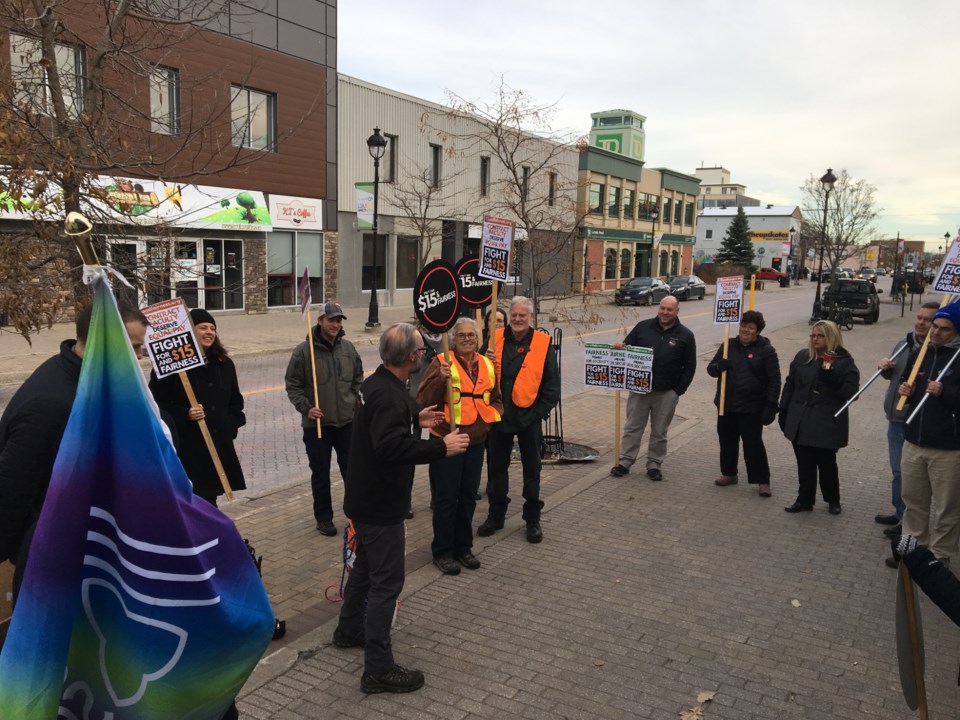 Jared Hunt speaks to a crowd in front of the North Bay & District Chamber of Commerce late Tuesday afternoon. Photo by Chris Dawson/BayToday.ca.

More than 30 protestors gathered outside the Chamber of Commerce in downtown North Bay late Tuesday afternoon.

It’s the second of a handful of protests that have been coordinated by the group Nipissing Decent Work, which is protesting the province’s proposed Bill 47, which is set to repeal a large part of Bill 148, which was passed into law just under a year ago by the former provincial Liberal government.

Bill 47 would freeze the minimum wage at $14 per hour along with eliminating two paid sick days.

The group which held a similar event last week along the bypass, chose to move to the front of the local chamber due to its recent support for Bill 47, which has been posted on the chamber website.

“We know the chamber of commerce’s across Ontario do great things for communities but right now they are on the wrong side of the political economy,” stated event organizer Jared Hunt.

“They are getting it wrong and we are here to say to everybody that  the information they are spreading is not correct.”

Hunt has also targeted MPP Vic Fedeli for his support for the Bill 47.

“If Victor Fedeli will not protect the rights of workers, then who will,” stated organizer Jared Hunt.

“Why is he siding with the lies and misinformation of Doug Ford and the Chambers of Commerce, when we know the job numbers in Ontario are promising, even with the $14 as minimum wage?”

Fedeli, replied to the protest through a series of tweets on Tuesday evening.

“Critics are also saying that the Act, ‘doesn’t let families invest in the lives of their children.’ The opposite is true. Nourishing a minimum wage economy is a failed policy that gives up on our young people and apprentices,” Fedeli stated through his Twitter feed.

Hunt says the protests are all about timing.

“Bill 47 is still getting debated so this is important, we want to send that message but these crowds are getting bigger,” stated Hunt.

“We are getting more skills, we are learning more tools to organize and to be people power so this is also about that.”