In total, Hubbert wants to give away 2,020 bottles, a number that intentionally coincides with the year the pandemic hit many parts of the world
Oct 15, 2020 6:00 PM By: Rocco Frangione 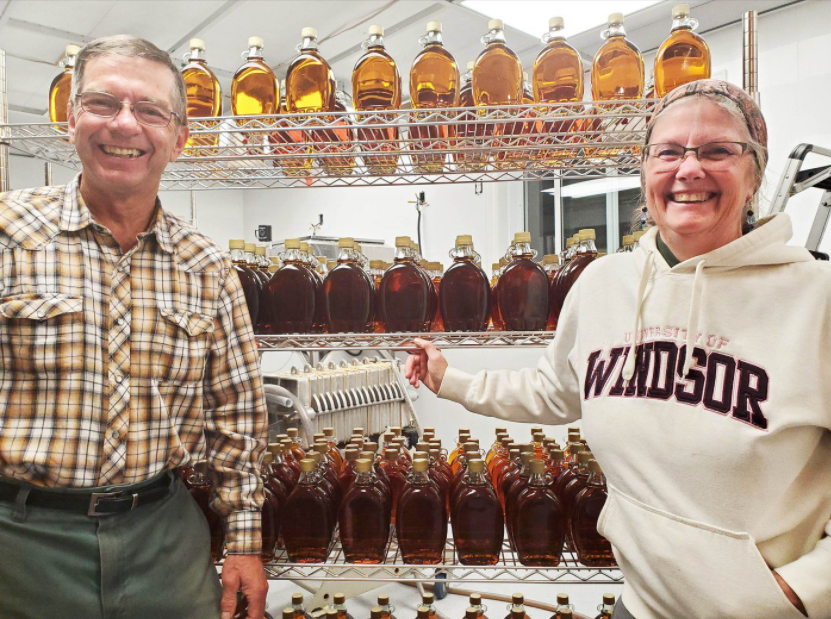 Bill and Lori Hubbert are giving away 2,020 bottles of maple syrup in 500-millilitre containers as part of a promotion to help people down on their luck. Supplied Photo

And once they land back on their feet, he hopes they reciprocate by helping others through their own acts of kindness.

Bill Hubbert, of Hubbert's Maple Products, is giving away a 500-millilitre bottle of his maple syrup for every $60 of maple-related products consumers buy.

“There are no conditions where it's sent,” Hubbert says.

“It could be a relative who's isolated at home, someone who's been impacted by COVID, a frontline worker, or someone who just needs some cheering up.”

The only thing Hubbert asks is that the consumer sends him a short note detailing how the maple syrup was given.

In total, Hubbert wants to give away 2,020 bottles, a number that intentionally coincides with the year the pandemic hit many parts of the world.

Hubbert, who is a fifth-generation syrup producer, says he is fortunate that he and his wife, Lori, had one of their best, if not best-ever, maple syrup seasons.

“We exceeded our target,” he says.

Then in mid-April, the couple's eldest daughter gave birth to their first grandchild who is named Annalina, with Maple as her middle name to recognize the family business.

Add in COVID-19 and Hubbert says he began thinking about how to celebrate his granddaughter's birth and, at the same time, help people who might be temporarily down on their luck.

Hubbert says he wants the people who give away their free bottles to send him a letter or note because he's creating a scrapbook for Annalina.

The promotion has been underway for a short while, and Hubbert says so far he's given away or committed more than 500 bottles.

Nearly half of the purchasers have mailed him a letter detailing where they sent a bottle.

“Some of the letters are even addressed to our granddaughter specifically so she'll be able to read them when she's older,” Hubbert says.

“One story we got back was from a fellow who buys a lot of our syrup,” Hubbert says. “He bought enough that he ended up with 12 free maple syrup bottles and he sent all of them to a food bank in British Columbia.

“Another person sent her bottle to a nurse in Sweden and another customer can't visit with her parents but she was able to leave her bottle on their porch.”

Hubbert calls his promotion Pay it Forward, a phrase he says is best explained when someone steps forward to pay for something for a person they don't know because they can't afford the item.

Hubbert says “he's planting seeds” with the hope that once the recipient who is down on their luck gets that Pay it Forward bottle, “when they get back on their feet, they can do the same thing for someone else.”

Hubbert's promotion is by no means inexpensive. Those 2,020 bottles he's giving away have a retail value of $25,000, which he could have used to pay business expenses.

“But we recognized that because of COVID a lot of people have been impacted and suffered, and many have suffered more than us,” he says.

Hubbert also sells his maple syrup to area grocery stores, which also can accumulate Pay it Forward maple syrup after selling a certain amount of the bottles.

Hubbert says he's made the same request to grocery owners and that is to give away the free 500-millilitre bottles he sends their way.

“The retailers can give them away to their customers or employees because it's the employees who continued to work during COVID. But it's their decision whom they choose,” Hubbert says.

Hubbert doesn't want his promotion to hurt other area maple syrup farmers and asks if people already buy from one specific farmer to continue buying from that person.

As for why he picked 500-millilitre bottles as the size for the giveaway, Hubbert says he wanted to make sure the syrup would last for more than one meal.

The syrup is stored in numerous 140-litre stainless steel barrels which are then brought out of storage, heated up, and re-filtered before being poured into bottles ranging in size from 250 millilitres to four litres.

Hubbert says the filling process is one that continues throughout the year and he hopes this dispels the myth some have that a maple syrup farmer's work is done once the trees have been tapped in early spring.