'People like to try the product before buying it. But I guess if we have returning customers, they're reassured that it's going to be good'
Jun 6, 2020 11:00 AM By: Mackenzie Casalino 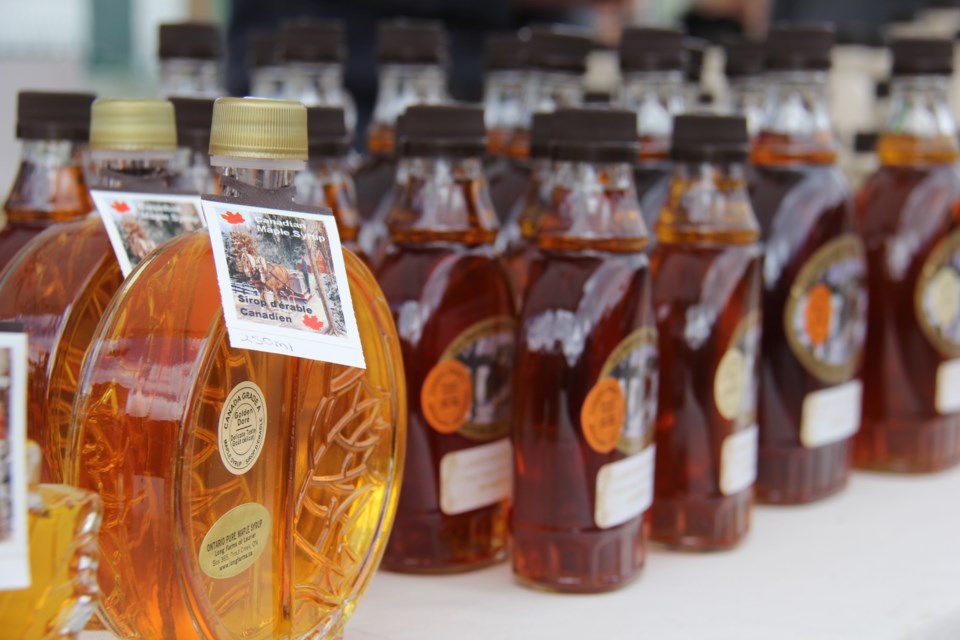 Maple syrup for sale at the Powassan Maple Syrup Festival. Photo by Brenda Turl for BayToday.

It’s been a good year for maple syrup production in the Almaguin Highlands, but sales have been a challenge.

“COVID-19 started right during the beginning of our production,” says Audrey Matthews of Matthews Maple Syrup of Powassan. “We lost all our sales during March break. Big weekends like maple weekend, Easter weekend, maple syrup festival [were all cancelled], so it's just been the last three weeks that customers are phoning in asking what type of a setup we have.”

Losing sales during syrup season was a setback, but Matthews says area grocers are helping by promoting local products and she has started to ship syrup throughout Canada to augment porch pickups and deliveries to loyal customers.

Jo-Ann Long of Long’s Maple Syrup of Trout Creek also has been using porch sales, online sales, and Facebook to sell syrup, and has shipped her products to as far away as Windsor, Ont., as well as Norway.

Long says sales have been good considering the restrictions of a pandemic, and she believes many customers lost due to the cancellation of the maple syrup festival are now turning to farmers' markets to get their syrup fix.

“We missed all the people who didn't come to the bush and… plus [there was no] maple syrup festival. So I think my farmers’ market sales are picking up because those people didn't get their syrup earlier.”

“People like to try the product before buying it. But I guess if we have returning customers, they're reassured that it's going to be good.”

Matthews agrees the pandemic has changed the farmers' market experience.

“People aren't coming to the market to meet people and to mingle,” she says. “They're coming with purpose. They have a list of ‘This is what I want’ and then they're gone.”

“We won't have the people coming up from the States or cottagers who are coming up this year,” she says. “You'll miss them, but then if they truly want it, they'll phone and they'll order it online.”

Matthews also believes sales have been hurt by the number of potential customers who have lost their jobs due to COVID-19. In response to declining sales, she has delayed making planned changes to her bottles and labels.

“That's the thing with a lot of us producers; we've got so many motors that are running at peak performance for two months of the year. It's a balancing act of what you can do, what you can't do and something you have to do regardless, you have no choice.”

And while producers here are enjoying some success with online sales, the competition is stiff from Quebec, where producers set a new record this year for maple syrup production, estimated at more than 175 million pounds for an average yield of 3.59 pounds per tap.

An additional 2.3 million taps in the past two years and a chilly April could explain why this season was so successful, they say.

“Despite the pandemic, retail demand for syrup has remained strong, and we hope that sales to hotels, restaurants, and institutions and to gift shops, all of which have been hit hard, will pick up,” says Maple Industry Council president Sylvain Lalli.

Matthews says it’s all about adapting to circumstances and trying to figure out how the market is changing.

“Who knows what the norm will be?” she asks

With files from Postmedia