Learning to clown around

In this Mid-Week Mugging, we had a chance to talk to North Bay's only official registered clown and how she learned to put smiles on faces by clowning around...
Jan 25, 2018 4:00 PM By: Ryen Veldhuis 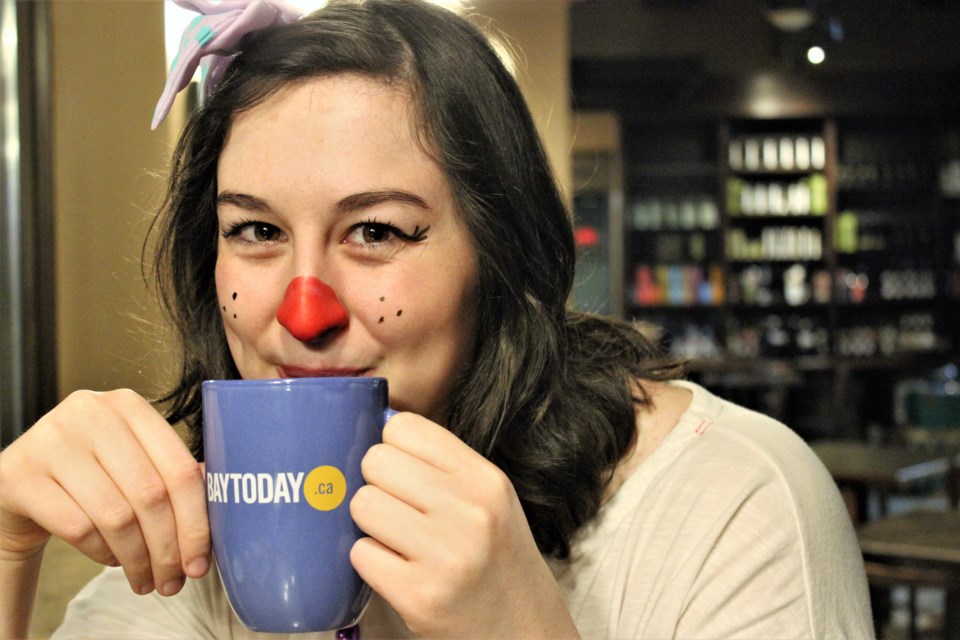 For some people, work really is all about fun and games—despite still being work. For Tealia Carriere, fun and games are her business, being North Bay’s first official, certified clown.

And while her mom currently calls her ‘the clown of the family’ it wasn’t always quite so for Tealia, the oldest of six children.

Her call to clowndom came a while ago when she was about 13 years old and she and her siblings were at a military family day in Petawawa where a clown was engaging with the kids.

“My siblings and I went up to the clown and unfortunately she was pretty surprised by how many of us there were,” Tealia said. “She said she didn’t think she’d be able to make something for all of us so instead, I asked her to teach me a balloon animal really quick so I could make something simple for my siblings.”

And that’s when Tealia learned her first balloon animal: a dog.

Soon after, her mother found her a book for making more balloon animals and she started down a long path of making anything she could with balloons. At first, she would make balloons at fundraising events, helping out, but started doing more and more birthday parties as she discovered her own clown identity, taking inspiration from a childhood influence.

“I grew up with Lunette the Clown on The Big Comfy Couch, and it must have been subconscious that I drew a lot of inspiration for my look from her,” Tealia explained. “At parties I get a lot of people tell me how much I remind them of her.”

However, when Tealia started high school, clowning around took a little bit of a break, something she was a bit regretful of.

“When high school came, it was a bit embarrassing to be a clown, and I wish I hadn’t of stopped,” she explained. “But when I got to university, my boyfriend found out about all the things I had done and told me it was a great idea and was something I should do on the side while finishing my program.”

And so Tealia started clowning around while not working part-time or in class, raiding her closet for an outfit to make her character come to life. It’s been a while since that day and it hasn’t been easy, but it’s been incredibly rewarding for her.

“I’m almost done my business degree and I had no idea I’d be this involved in being a clown and I didn’t know how badly people wanted a clown in their community,” she said. “It was very difficult to balance that while still in school and having a part-time job.”

Recently, she’s been making her way around the north, traveling out of the community to places like Sudbury to entertain. But making a name for herself as an entertainer has gifted her with the chance to make so many people happy, children and parents alike.

“I entertain children and adults,” she said. “I might be asked to come in and do a birthday party for kids, but it doesn’t take long for the parents to want to get in on the fun. I’ve done parachute parties for the summer where I bring in this big parachute and me and the kids all lift it up to get under it, but by the end of it I get all the parents asking if we need help and having a blast with the kids.”

And being a certified clown for face painting and balloons, children line up to get their favourite characters painted on their faces at parties, many—boys and girls—asking for Spider-Man, Batman and many more.

And sometimes Tealia gets called into events solely for adults, who are honestly just bigger kids in the end.

But in the end, it’s seeing the faces, the expressions of people—kids and adults alike—at these events, beaming with pure joy and fun, letting themselves indulge in their childhoods or reliving them.

“It makes me so happy to see people having so much fun together after I entertain them at these events,” Tealia said. “It honestly makes my day and makes me want to keep on doing this.”