In West Nipissing, divided council can't even agree on how to meet

'Since the last meeting of Council, I have received several complaints regarding sound and also received enquiries of when will Council reconvene in person.'
Aug 10, 2020 4:00 PM By: Stu Campaigne 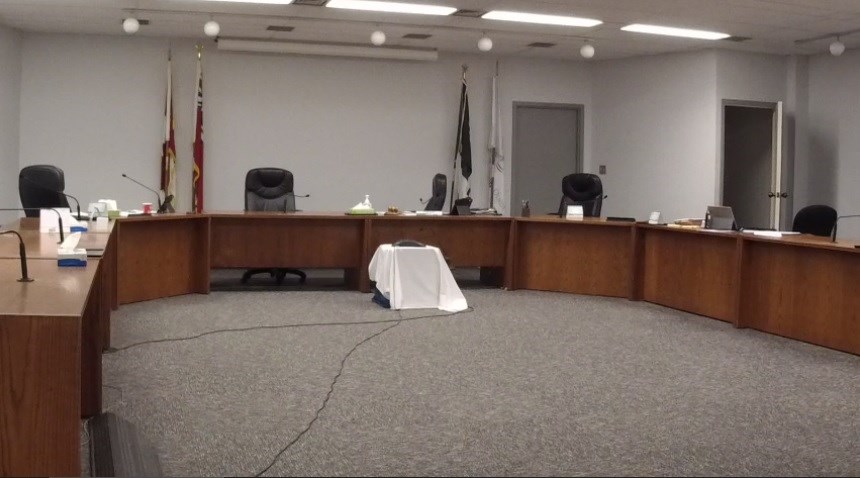 The West Nipissing council chamber will remain empty tomorrow after a scheduled meeting was cancelled. Courtesy Livestream/Municipality of West Nipissing

Former Ward 7 representative Jeremy Seguin referred to the level of dysfunction in the ranks of West Nipissing Council as he resigned and now comes word from the municipality it has scrapped tomorrow's meeting because a consensus could not be reached on how and where to hold it.

Mayor Joanne Savage said last month she agrees with Seguin and is now releasing a statement advising the committee and council meetings scheduled for August 11 have been cancelled.

Council was poised to discuss how it would proceed with filling Seguin's vacant seat at that meeting. This, after failing to reach a consensus on July 21 on whether to appoint the runner-up from the 2018 election, accept applications for the seat, or hold a by-election. According to various council members, a divide exists in West Nipissing, and the unofficial vote at the last regular meeting on the empty seat was a deadlock, 4-4, without a vote from Ward 7.

Meanwhile, two West Nipissing residents have expressed interest in taking over for the remainder of Seguin's term.

And: A race for vacant seat in West Nipissing?

That matter and others originally scheduled to be dealt with tomorrow evening will now be pushed back until September 1.

Savage writes, "Efforts to change the conduct of our meetings in a different manner was not achieved and the meeting for August 11th is cancelled. The quorum wasn’t achieved. Some Council members wish to proceed strictly by telephone and some Council members preferred reconvening in person."

Meetings have been testy in West Nipissing, with tempers flaring and technological issues exacerbating the tension. The council remains split on how and where to hold future meetings.

"We no longer should have to deal with sound problems, physical absences or not seeing each other since March 2020," offers Savage. "Since the last meeting of Council, I have received several complaints regarding sound and also received enquiries of when will Council reconvene in person."

Meetings have been held remotely since the onset of the COVID-19 pandemic, with many of them streamed and made available to the public since March. Those meetings have been difficult to follow as councillors spread across the municipality deal with challenges with internet speeds and telephone connections — which vary in effectiveness from ward to ward.

Savage says, "Meetings, as they are presently being conducted, are not working and the objective was for us all to see each other after several months, whether in person or on a screen."

The Mayor advises the planning board was successful in reconvening for the first time since March on July 20 in the council chambers. She says five of the seven members plus the municipal planner attended in person and social distancing was not a problem.

Savage is encouraging her fellow members to meet in person, or at the very least, to participate via Zoom if unable to attend for health and safety reasons. She points out Nipissing First Nation recently held an in-person council meeting.

"In the interim, the CAO will be exploring options and hopefully assist Council with solutions for our next meeting," adds Savage.

OPINION: The Noah Dugas story and the lessons taught
Sep 25, 2020 11:00 AM
Comments
We welcome your feedback and encourage you to share your thoughts. We ask that you be respectful of others and their points of view, refrain from personal attacks and stay on topic. To learn about our commenting policies and how we moderate, please read our Community Guidelines.