Gutsy performance for Battalion in 4-3 loss to London 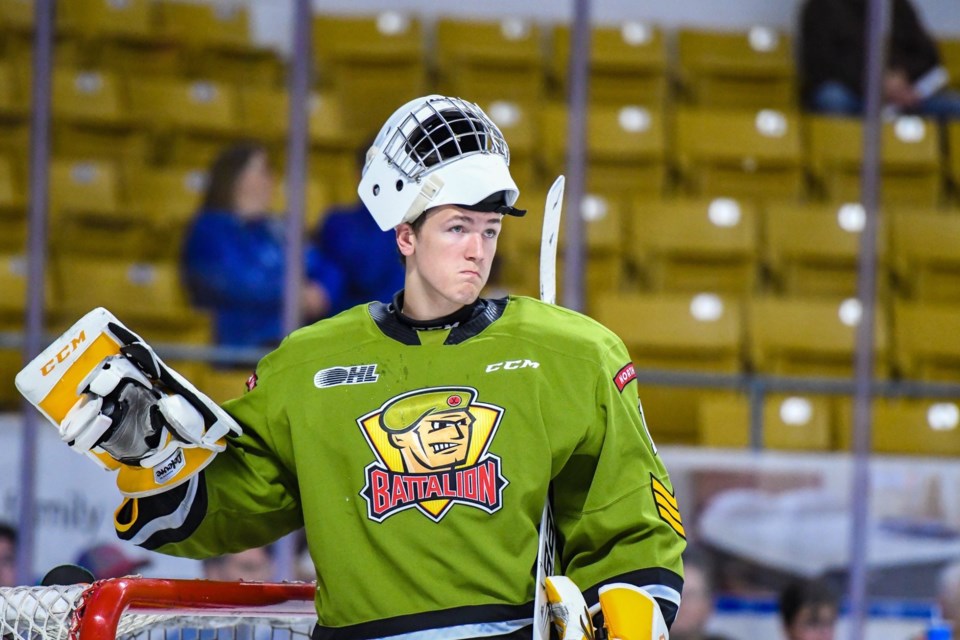 For 50 minutes and 4 seconds, the Battalion were either tied or had the lead against the London Knights. And on the road, in a building they have yet to win in, since moving to North Bay, they had given themselves a chance to not only snap that streak but their seven-game losing streak as well.

Unfortunately for the young club, the Troops gave up a Liam Foudy (5) goal at 10:04 of the third, to get London ahead 3-2, their first lead of the game.

North Bay would tie it up at 17:36 when Matthew Struthers (10) made a beautiful drag move to get into the zone, drive to the net and then skate to the far side post to beat Knights goaltender Dylan Myskiw.

With the score 3-3 with under three to play and the Knights really poured on the pressure. Save after save was made by North Bay netminder Joe Vrbetic in what can only be described as a gutsy performance from the rookie goaltender. His Troops were flying around, throwing themselves in front of the puck, including Alex Christopoulos who blocked two straight point shots within that sequence.  But alas, the Knights offence finally broke through with a shot from the right-wing side at the top of the circle, off the stick of Connor McMichael (18) that just beat Vrbetic on the glove side and ended up as the game-winner.

“You go into London with a third period lead, and that’s what you want,” says Assistant Coach Adam Dennis.

“It was within our grasp, I thought that the way it ended was a little disappointing considering the way we battled.”

Mitchell Russell (6) came into the attacking zone on the rush, flipped the puck to Matthew Struthers, who then fed it back to Russell in front of the net and he buried it with just 24 seconds remaining in the first.

“It was off a draw and Struthers had it, we made eye contact and he threw it, I got a stick on it and it went in,” says the Battalion Captain about his fifth goal of the season.

“It was nice to have, nice to get one there.”

Despite the loss overall, Chenier says he felt the team competed throughout the night.

“I thought we actually played pretty hard. Joe kept us in the game with all those saves he made,” he says referring to Vrbetic who ended the night with 46 saves.

Dennis says he thought Vrbetic showed a lot of character and determination in that game. “I think it speaks a lot to what Joe is going to be as a goalie. This is not an easy rink to play in. He looked very comfortable. I thought he made the game look easy. He should feel very good about his game.”

London went two for seven on the power play and both of those goals proved to be big ones; one got them on the board, the other got them the lead. Chenier acknowledges it’s the little things they Troops will have to adjust to as a tough three games in three days weekend continues.

“At the end of the day, they got a power play to crawl back into it, and then they got another one so. You know, I thought the effort was there, but we just have to clean it up and get back out there tomorrow.”

Tomorrow sends the team to Windsor against a Spitfires club that is on a six-game winning streak.