'I was inspired by the variety of monsters in the movie, so I took my camera outside to take a picture that I could manipulate a giant Shadfly into, preferably with landmarks, hence the Pro-Cathedral'
Jun 11, 2019 4:00 PM By: Chris Dawson 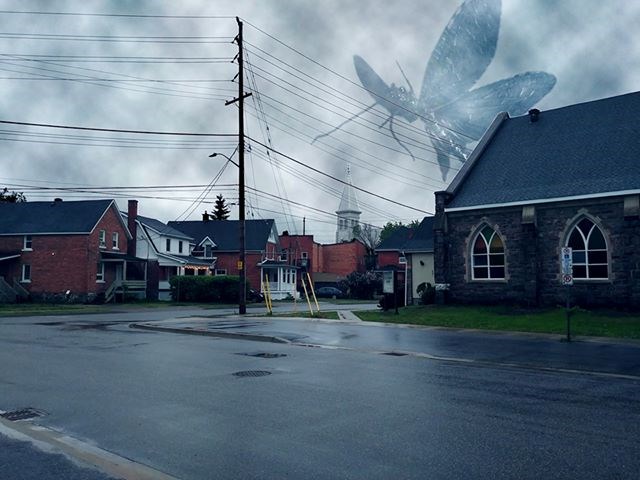 A couple of years ago it was Shadman, and now graphic designer Avery Ross is using North Bay’s favourite summer insect to create “Shadra” the Giant Shadfly.

Ross says the inspiration for the idea came from his passion for monster movies.

“I'm a huge fan of the Godzilla series, specifically the older films, but the new King of the Monsters film was more than welcome to me,” Ross told BayToday.

“The day after I saw it we had really gloomy rainy weather. I was inspired by the variety of monsters in the movie, so I took my camera outside to take a picture that I could manipulate a giant shadfly into, preferably with landmarks, hence the Pro-Cathedral.”

See related: They may be late but they arrived

Ross’ photo manipulation resulted in the depiction of the amazing giant shadfly seen flying over the city.  Could you imagine with the millions that come out of the lake, to have some that size descending on North Bay streets?

Ross says the photo is already getting some attention through social media.

“The problem was there were no clouds for the beast to be behind to give it a sense of height, so I had to rotoscope the buildings into the foreground and render some fake clouds,” explained Ross about the process of creating the scary picture.

“A lot of blending and colour work later, we have this. I jokingly called it Shadra, a play on Mothra, and uploaded it to social media. People from North Bay seem to love it, so I decided to share it.”

“It was just a fun little project.”

However, the good news is if this scary creature is similar to its tiny brothers and sisters who come out by the millions in late June and early July, that means it has no mouth so it would not be potential a harmless giant.