Ford says he won't forget about the North

'It is absolutely critical, to make sure that everywhere up in the North they say,’ don’t forget about us,’ and this is going to send a clear message to the people of the north we aren’t going to forget about you'
May 3, 2018 11:30 AM By: Chris Dawson 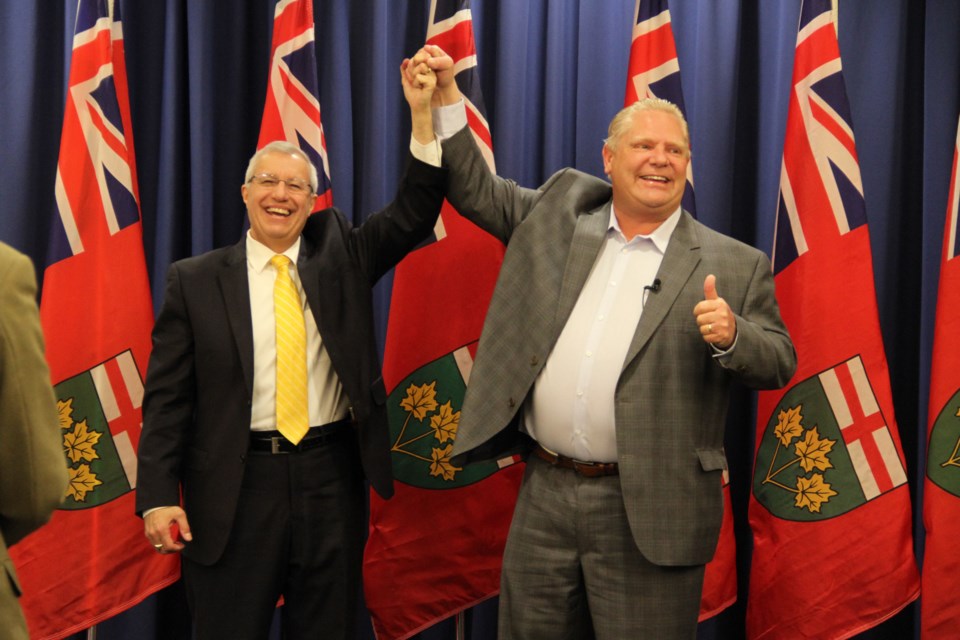 Thumbs up! Vic Fedeli and Doug Ford at the PC rally at the Grande Event Centre this morning. Photo by Chris Dawson.

It was a packed house full of energy for 8 a.m. at the  Grande Event Centre.

More than 200 supporters took part in the breakfast hosted by Ontario PC leader Doug Ford who made a campaign stop in North Bay this morning alongside with Nipissing MPP and current leader of the opposition, Vic Fedeli.

“He’s my right-hand man, my left-hand man,” Ford said in his speech about Fedeli.

Ford spoke to the crowd for close to 15 minutes and then spent about another 30 minutes meeting, greeting, and posing for a photo with Vic and supporters.

After the photo op, Ford spoke with the media for about five minutes talking about his plan for the north, cutting hydro rates, and bringing back the Northlander train.

“It is absolutely critical, to make sure that everywhere up in the North they say,’ don’t forget about us,’ and this is going to send a clear message to the people of the north we aren’t going to forget about you,” stated the Toronto area politician.

While he says reducing taxes is the highest priority overall, he feels the Ring of Fire is a key priority for the North.

Fedeli and Ford spoke about the Northlander which Fedeli says would be tricky to bring back since the passenger rail cars and the ONR terminal has been shut down at Union Station.

“You will see in our costing there is $30 million for the purchase of cars and $15 million a year in an annual subsidy,” said Fedeli jumping in on the Northlander question to Ford.

During this campaign stops, Ford says he has heard how important the Northlander is for the North.

“They feel stranded and that is what I am hearing, that they either have to take a bus or have to take a car down to wherever they are going. Sometimes to the city of Toronto for medical conditions and we find there has to be a reasonable way,” he said.

A small group of protesters stood across the street from the Grande Event Centre holding up signs including one that read,”Respect the North, we are not just votes.”

Opinion: Why are we taking such a backward approach to helping the homeless in our city?
Sep 29, 2020 2:00 PM
Comments
We welcome your feedback and encourage you to share your thoughts. We ask that you be respectful of others and their points of view, refrain from personal attacks and stay on topic. To learn about our commenting policies and how we moderate, please read our Community Guidelines.