'We know that food insecurity is a substantial issue, and the reason why is because we know that the amount an individual gets on social assistance when you factor in the cost of shelter is not enough'
0
Apr 27, 2018 11:45 AM By: Chris Dawson 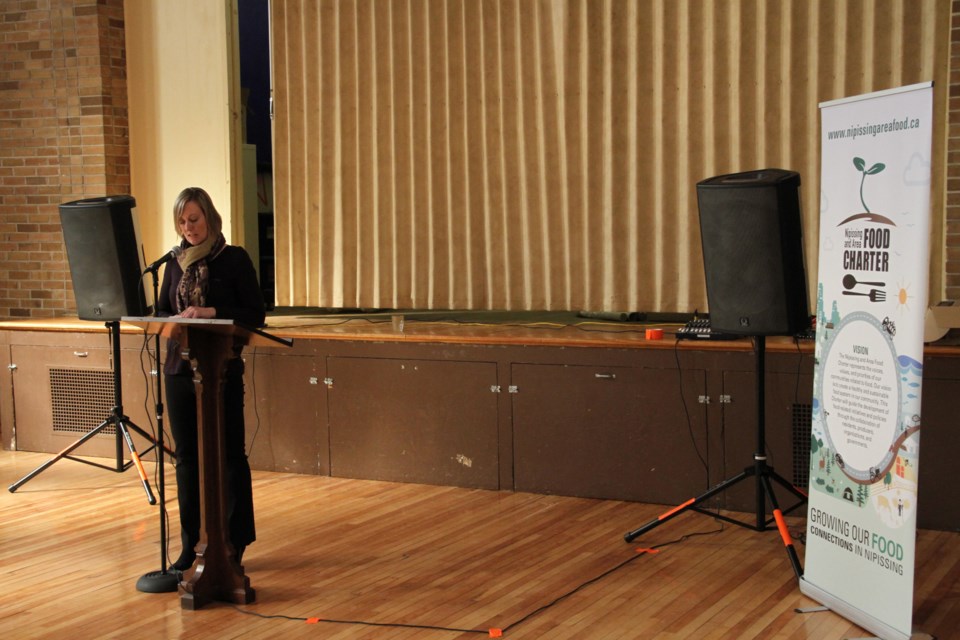 Event organizer Kathleen Jodouin speaks to a crowd of close to 50 at St. Andrew's United Church. Photo by Chris Dawson.

The Nipissing Area Food Roundtable hosted a breakfast this morning to hear the provincial candidates stance on food insecurity in the province and locally.

Unfortunately, those hungry for information were left disappointed as only NDP candidate Henri Giroux and Liberal Stephen Glass attended. Nipissing MPP and PC candidate Vic Fedeli had a conflict and had a letter read to the crowd by organizer Kathleen Jodioun.   In his role as Interim Leader of the Official Opposition, Fedeli joined Premier Wynne and Andrea Horwath as speakers at the Ontario Chamber of Commerce AGM in Hamilton today.

Giroux and Glass gave general information about their party's platforms but neither spent a lot of time speaking about the topic in question.

Kathleen Jodouin was the event organizer along with being the HIV Education and MSM Outreach Coordinator for the AIDS Committee of North Bay and Area.

She says food insecurity itself is multi-faceted and has many different faces.

“It can be people having to choose between their housing or their food costs, maybe it is their transportation to and from work,” she explained.

“Maybe it is they can eat two out of three meals a day, or what type of foods they are eating. It can also be reflected what they can provide. Is it new shoes for the school or is it lunches this week? I think it has many different ways it shows up in our community. Some folks are using their emergency food banks. We know a lot of folks who are food insecure are not even accessing those services.”

Joseph Bradbury, Chief Administrative Officer, for the District of Nipissing Social Services Administration Board, was one of the speakers at the event which took place at St. Andrew's United Church.

“We know that food insecurity is a substantial issue, and the reason why is because we know that the amount an individual gets on social assistance when you factor in the cost of shelter is not enough, specifically for Ontario Works individuals,” he said.

“We have seen a lot of proliferation of food banks and the need for food banks and other things like soup kitchens. We are seeing a rise in utilization of those things because the cost of rent is going up.”

While only two candidates spoke at today’s event, Jodouin hopes that bringing the issue of food insecurity to the forefront is key and she hopes it becomes a top priority for all the local candidates in the upcoming provincial election.