Firebirds outlast Troops for a 6-3 win in Flint 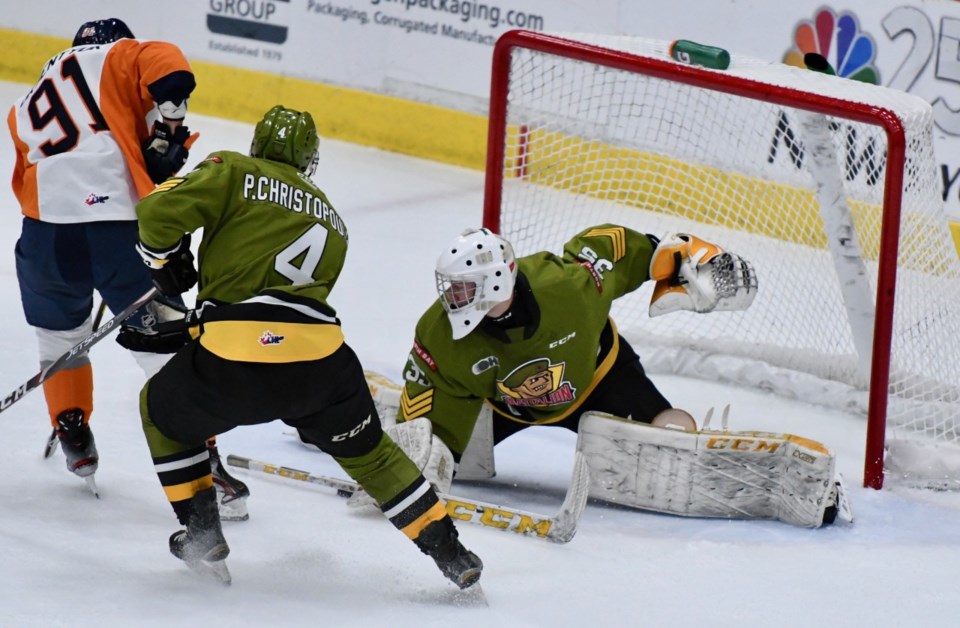 Christian Cicigoi stops a scoring attempt from Evgeniy Oksentyuk with some help from Paul Christopoulos. Photo Credit to Sean Ryan.

Winning on the road in any league is a tough obstacle, and the Battalion are finding that out through the first two legs of this stretch in which they play five straight away from Memorial Gardens. Through the two games they are 0-2 after a 6-3 loss to the Firebirds in Flint on Saturday night. But in the second game there was much to like about the teams play for most of the game, but it wasn’t enough as Scott Wray explains, the team couldn’t replicate their good work through the full 60 minutes.

“I thought for two periods we played a really good hockey game,” says the Assistant Coach of the North Bay Battalion.  “We went in tied 2-2 going into the third, and that’s where we made some young mistakes.”

Only 3:22 into the final frame, Jake Durham scored his 7th of the season with a crashing the crease type goal that put the Firebirds up 4-3. It was the first of three unanswered goals in the third period by the home side Firebirds (7-4-0-0) who are now undefeated in all four of their home games this season.

Evgeniy Oksentyuk (4) and Ty Dellandrea (5) scored at 7:51 and 15:08 respectively to give the Firebirds a 5-2 lead, their largest of the game and a lead they would not relinquish.

Wray says every time out at this point for the Battalion has to be looked at as a learning experience, whether they win or lose.

“When they see the losses happening in the third, or if it’s just one period that those mistakes happen, they are going to learn from them and that’s what’s happening. We just can’t go into the third and get beat in those one on one battles. Those plays kill you and when the puck turns over, it’s in your net and it’s tough.”

And while a defeat by three goals isn’t pretty to look at in the box score, it was a much better all-around effort by the Troops than what they presented just 24 hours prior in a 9-1 loss.

“It is good to see,” says Wray on the effort in Saturday’s loss.

“We’re a young team that came out pretty hard and forgot about last night. Today was a new day, thankfully, and they came out and played pretty hard. It was a good effort on all accounts. Even Cicigoi had a really good first two periods. He made some big saves early. Even the first shot of the game, he made a big toe save. It kept us in the game.”

Cicigoi was pulled from Friday’s contest in the second period, but returned in the third to finish the game. He stopped all nine shots in the first against Flint on Saturday, and was tested throughout the second, making 16 saves on 18 shots.

The Battalion (3-8-0-0) and the Firebirds were tied through the first 40 minutes. Scoreless after one, with the Battalion leading the shot category 15-9, the two teams continued trading chances through the second.

At 10:22, Jack Wismer (1) finally broke the goose egg, coming over the blue line and beating goaltender Chirstian Cicigoi on a glove side shot from under the right side circle.

Matthew Struthers (6) answered back for North Bay at 11:47 when he took a pass from Kyle Jackson on the left side of the zone, cut to the middle and beat Flint goalie Luke Cavallin under the pads, to make it 1-1.

With the score 5-2 in the third, Paul Christopoulos made put forth a tremendous individual effort to find a lose puck in his own defensive zone, skate  all the way into the Firebirds end and set up Jackson (1) for a one-timer at 18:11.

That effort by Christopoulos encapsulates the hard-working style of play this young group is showing night in and night out, but piecing it all together to result in wins is still the key as the Troops go through the early stages of this season. Christopoulos has come into the league and fit right in to a top-four spot among the D-Core and has rarely looked out of place at any point this season.

Although none of them earned a point, the line of Luke Moncada, Liam Arnsby and Harrison Caines also had a good night on the ice. They created multiple scoring chances, including a Moncada breakaway that Cavallin was able to stop in the first period.

“They were always buzzing around the net, they had tons of opportunities,” says Wray.

“Luke had a really good opportunity early. Tried to go to the forehand on a bit of a breakaway. He’s been playing really well for us, you know he’s had a great start to the year and that’s another guy that seems to get lost in all the commotion right now. But he’s a heart and soul kind of guy and it’s nice to see him getting some success early.”

Both teams were perfect on the penalty kill going 3/3 each, while the Troops had the slight advantage in the face-off circle with 30 wins compared to 29 losses.

It’s just the second time in the five year history of the Firebirds that they have beaten North Bay, and both of those have come in Flint. Struthers two goals on the night give him six goals and 11 points over his last five games.

The Battalion will look to get two points out of the three-game swing when they visit the Sault Ste. Marie Greyhounds on Sunday afternoon.