'When he came back, he started fighting the fire on his neighbour's apartment. He left his [own home] alone, a selfless act. I want to get that out there because not many people would do that.'
May 15, 2020 2:00 PM By: Stu Campaigne 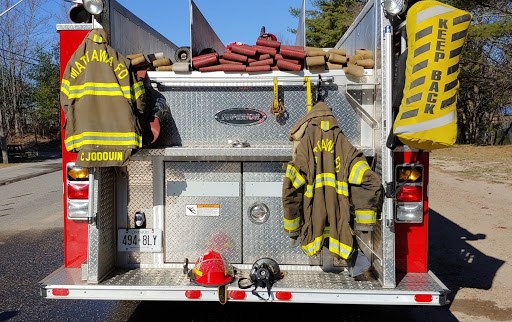 Firefighters received a helping hand from a fellow volunteer while tackling a blaze on Mattawan Street, Wednesday morning.

According to a Mattawa volunteer firefighter, the actions of one of the residents affected by the early Wednesday morning blaze on Mattawan Street exemplify the spirit of the community.

A man identified as Nelson Jenking Jr. lived with his family in one of the four units affected by the fire. Witnesses say he got into his vehicle, drove to the Papineau – Cameron Fire Department where he is a volunteer firefighter, collected his gear, and returned to the scene of the fire.

Jenking fought the fire alongside his fellow volunteers from Mattawa.

Dan O'Grady, now a Mattawa firefighter, says Jenking has always been proud to give his time and effort to the volunteer department when the two served together for several years with Papineau – Cameron.

"We got the call and when we arrived, Nelson was outside, hanging back," says O'Grady. "It was when we called for mutual aid — because of the size of the fire we needed help — he left."

O'Grady says what happened next that chilly morning is typical of him.

"When he came back, he started fighting the fire on his neighbour's apartment. He left his [own home] alone, a selfless act. I want to get that out there because not many people would do that."

Jenking's end unit suffered considerable destruction due to the blaze and it seems unlikely the four smoke- and water-damaged units will be habitable soon, if ever.

The community has rallied around the four Mattawa families displaced by the Wednesday morning fire. Eleven people have been displaced, five adults and six children.

One man suffered third-degree burns and was airlifted to a burn unit, where reports say he remains in treatment.

A GoFundMe page has been collecting funds for the victims.

Jessica Papp has been collecting clothing and additional items for the victims at her house. She also lauds Nelson's "selflessness, bravery, and amazing heroic acts. Nelson's spirit captures the amazing attitude that many people in our small community have."

Papp says, "I've only gotten to know all four families through this tragedy, however, it's so incredible that despite going through something so tragic all of them are putting their children's safety and happiness needs way before their own."

She says some of the families have lost everything and have identified some needed items to help get back on their feet, including two double beds, dressers, a twin bed, a crib mattress, pillows, blankets, bedsheets, kitchenware, and assorted household furniture.

Other items listed include toys for a small boy, a tablet for a five-year-old girl, an acoustic guitar for one of the mothers, arts and craft supplies, and children's books. Papp says she is also on the hunt to secure storage units for the families to store items until they have new homes. Please contact Papp here, for more information about donations.

On his friend and fellow firefighter, O'Grady adds, "If the department ever needs anything, Nelson is the first guy to put up his hand. He's a very dedicated member and does a lot for the community."