Tuesday, the principal of a local school went classroom to classroom to explain the reasons for the ban on the popular toys
May 25, 2017 9:45 AM By: Stu Campaigne 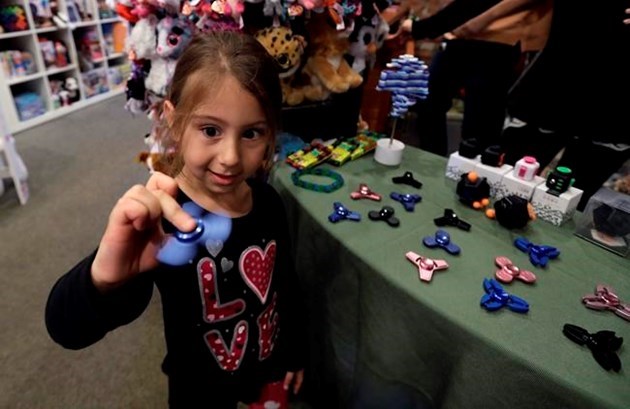 The explosion in popularity of fidget spinners has led to distractions in classrooms, say some educators, leaving no choice but for some schools to ban the toys. Photo courtesy of Canadian Press.

"Our principals make decisions based on the needs of students while respecting their individual profile. In this sense, the school has provided several other ways, strategies and ideas for students who need support in terms of concentration and attention. We are proud of our students understanding and collaboration. They were involved in the adoption of possible solutions and quickly realized that distractions and disturbances can disrupt the learning of others."

It seems that fidget spinners, the trending toys of the year, are spawning another trend: officials banning them from school property altogether.

Students at Saints-Anges Catholic Elementary school were visited class by class by their principal, Daniel Villeneuve on Tuesday. The students were told that fidget spinners were being outlawed on school grounds.

A message to parents was sent out Wednesday elaborating on the decision:

Recently, many students have brought a « Fidget Spinner » to school. This toy is sold under the pretext that it helps people focus and concentrate. Here are the issues with this toy:

1. it makes noise;
2. it attracts attention;
3. most kids require two hands to make it spin;
4. it distracts the user and others.

For these reasons, this toy is banned from the school and the daycare. I cannot speak for the bus drivers but if they are permitted on the bus, they must remain in the student’s school bag at school. Thank you for your understanding and your support.

For more information on fidget spinners, click here. The link was also included in the message to the parents of students from Saints-Anges.

When contacted, a representative from Saints-Anges advised that the ban was not put in place by the board, but rather was a school decision.

Saints-Anges is not the first school to take these measures locally. A parent of a student at Silver Birches said Wednesday that the ban on fidget spinners has been in place at her son's school for "a couple of weeks."

Students at Silver Birches are being granted "no ban days," where they can bring their fidget spinners and Pokemon cards to school on approved days.

Said the same mother, "I ordered my son a fidget spinner off of Amazon but the school banned them before it got here."

Complaints from teachers that the very toy that was supposed to heighten attentiveness was causing the opposite effect have been heard more regularly since the proliferation of fidget spinners in schools.

In the last month, fidget spinners have been the subject of a debate as to their usefulness (for all students) in a classroom situation. Originally intended for use by students with autism or attention disorders as a way to focus on tasks, fidget spinners were once seen strictly as classroom aids.

The trending popularity of the toys this spring has revealed that perhaps too much of what many special needs teachers once deemed a good thing can really be a bad thing.

Bus terminal to be used as cooling centre
Jul 9, 2020 12:00 PM
Comments
We welcome your feedback and encourage you to share your thoughts. We ask that you be respectful of others and their points of view, refrain from personal attacks and stay on topic. To learn about our commenting policies and how we moderate, please read our Community Guidelines.