OPP are reminding you that emergency scams target vulnerable people and seniors by playing upon their emotions and rob them of their money.
BayToday Staff Mar 22, 2015 9:00 AM 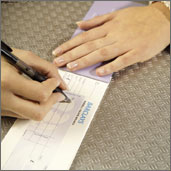 OPP are reminding you that emergency scams target vulnerable people and seniors by playing upon their emotions and rob them of their money.

Each year, emergency scam artists contact thousands of citizens and many people get scammed in their rush to help. Many victims are hesitant to say ‘no’ or to hang up on someone on the phone, which makes them easy targets for criminals to access substantial sums of money.

In 2014, five per cent of all complaints received by the Canadian Anti-Fraud Centre were victims of the “Emergency Scam” -- sometimes referred to as the “Grandparent Scam”. Of those 1,977 complaints, 737 people were identified as victims who reported a total loss of more than $2.4 million.

In the typical emergency scam, the victim will receive a frantic phone call from someone claiming to be a grandchild or loved one. The caller will explain that they are involved in some sort of mishap or are having trouble returning from a foreign country and need money right away.

Scammers know how to gather your personal information for criminal means.

They use phony social media accounts to find real names, real interests, real phone numbers and when you are going to be home or away.  They’ll even call in the middle of the night to take advantage of the confusion caused by awaking suddenly with the expectation its bad news at that hour.

Most of all, they rely upon the victim’s desire to help their loved ones, whatever the cost.

Be aware of some warning signs:

To avoid becoming a victim, police advise you to first check with another family member or trusted friend to verify the information BEFORE sending money or providing credit card information by phone or e-mail. It is vitally important that the incident be reported every time it occurs, to allow police to investigate and prevent others from becoming victims.

If you or someone you know may have been the victim of an ‘emergency’ scam, contact your local police service or Crime Stoppers at 1-800-222-8477 (TIPS)

“All consumers, regardless of age and gender, can take basic steps to protect themselves from becoming victims of fraud, such as never giving out personal information over the phone, the internet or social media.   Remember, if it is too good to be true...it probably is,” says Deputy Commissioner Scott TOD, OPP Investigations and Organized Crime Command.

Endaayaan Awejaa “Where I live and that good feeling of home”

How does the North Bay average car insurance rate compare to other cities in Ontario?

Get Connected to the Village Media Network!