The thorough report highlighted many of the details, instances, explanations, and excuses for inappropriate behaviour used by one or more members of city staff
Jamie Lyle Jan 28, 2014 6:49 PM Sep 10, 2018 2:37 PM 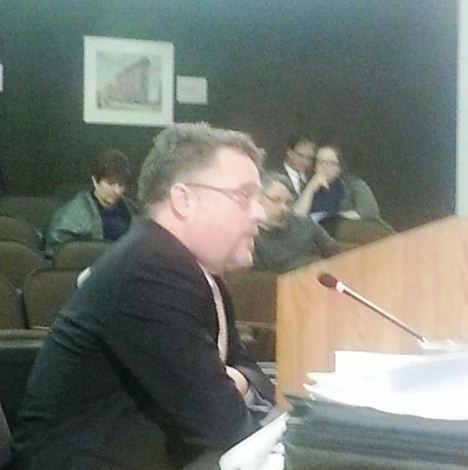 North Bay City council was presented with the long-awaited and much-anticipated report during Monday evening's committee meeting regarding KPMG's prepared investigation of the North Bay Memorial Gardens Sports Arena renovations, with key findings that revealed how the 16 million dollar project got so out of control and over budget.

The thorough report highlighted many of the details, instances, explanations, and excuses for inappropriate behaviour used by one or more members of city staff,

The report, read to council by KPMG Partner Oscar Poloni stated that, on more than one occasion, one city staff member approved change orders, issuing numerous cheques for large amounts of money and creating balances while overstepping protocol and by-law procedures, allowing the project to proceed by using verbal agreements rather than creating a proper paper trail.

It was indicated in the report that the initial Garden's project budget of 12 million dollars was not created with a solid budget number but was more of a 'conceptual figure with no substantive support,' a phrase that was used by Managing Director of Community Services, Peter Chirico, during his interview with KPMG.

The initial breakdown of the 12 million dollar budget was between 'hard costs', of construction, which totalled 10 million dollars and two million dollars of 'soft' costs, which included architectural and project management services.

Yet, according to a staff report included in the investigation, the project's number, hovering over 12 million dollars was 'based on preliminary drawings and renderings only and at best was a guideline of where we were going. The estimate was used as a guide only and were made quite aware of this at the time of presentment.”

“We (auditors) are convinced, after going through Mr. Chirico's emails, that a budget of 12 million dollars wasn't even prepared and that council approved a project in the absence of a formal budget,” said Poloni.

“Based upon this, we find that the (Memorial Gardens) project was doomed from the start,” said Poloni.

A staff report was provided for KPMG, which gave auditors an indication of the originally planned funding sources that were to be spent on the Memorial Gardens renovations.

It shows that $3,900,000 of funds, which were allocated to Memorial Gardens under the City's 10-year capital forecast.

In addition, $5 million was to be provided by the Battalion in the form of an interest free loan.

As well, $1million was anticipated to be received by FedNor, which ultimately turned down the funding request as early as May 2013, thus leaving the projected budget to be short by the same amount.

However, The Northern Ontario Heritage Fund came through with its funding, resulting in $1 million for the project.

Lastly, $1.1 million was contributed from reserves, which was to be repaid through the Capital Reserve Fund Fee, totalling $12 million for the project.

Reading from his report, Poloni stated that “Given the significant discrepancy between the budgeted construction costs and cost estimates prepared in connection with the project, it would appear that the likelihood of completing the Memorial Gardens renovations within the approved budget were remote from the inception of the project.”

The report further states that the management of change orders relating to the Memorial Gardens renovations appears to have been 'insufficient', with change orders being approved verbally, with construction work commencing without quoted prices.

“During our discussions with representatives of the project team, we were advised that issues with the performance of one or more parties adversely impacted the project from a timing and cost perspective,” Poloni stated.

Poloni reiterated in his presentation to council that the project also had its challenges in managing the cost of change orders issued and their resulting impact on its budgeted contingency provisions and noted that the required written documentation was prepared in August of 2013 after much of the work was completed.

Instead of using a more traditional stipulated-sum approach to construction, which typically involves a project being tendered upon the completion of design drawing, the report indicates that city officials used a 'risky construction management approach', which allows for certain aspects of a project to be fast-tracked in order to reduce project time frames.

The project was therefore commenced before the completion of full design drawings, which were being constantly modified to over a hundred different drawings at the same time that construction activities were taking place.

These design modifications included the installation of kitchen equipment, along with renovations to the concession areas, costing the project more than $500,000.

Auditors from KPMG wrote in the report that they were uncertain as to why these scope changes were omitted in the project's budget as the City was required to fullfill these contractual obligations which are stated within the Arena Agreement.

The agreement, ratified by the City, agreed to undertake certain renovations and upgrades to Memorial Gardens which the (Brampton Battalion OHL Hockey Club) acknowledged would not exceed $12,000,000.'

A later identified need for asbestos and mould removal, along with changes to the Gardens electrical and mechanical systems, along with other undisclosed costs, created a more expensive project, increasing costs by 1.4 million dollars and ballooning the initial budget by 22.6 percent.

“While the project did contain provisions, these were insufficient to deal with both the expansion to the project scope and the cost of the unanticipated work requirements,” Poloni said.

Astonishingly, apart from the $600,000 that was approved for mould remediation, there was no disclosure given by city staff to council regarding the numerous cost overruns or of the actual amount of money that was being spent, despite a few councillor's attempts to retrieve that information.

This act of non-disclosure is in direct contrast to the City's purchasing by-law requirements, which states 'if the amount of the cumulative overages approved for a contract is expected to exceed 15% of the value of the contract, the matter will be referred to Council for consideration'.

As Managing Director of Community Services, Mr. Chirico, the person who had overall project responsibility, would have been required to disclose the new cost information to the council as early as winter of 2013, a task which he failed to do.

During staff interviews, Managing Director of Community Services Peter Chirico advised auditors from KPMG that he assumed that budget and cost information related to the project included HST and that the costs would be reduced by the amount of the eligible HST rebate.

However, Mr. Poloni himself quietly put that notion to rest, informing council that “Everyone knows in the construction industry, there is no HST.”

With regards to the loss of FedNor funding, Mr. Poloni's report states that 'While Mr. Chirico has considered incremental revenue from the Battalion and Nipissing University (Trappers) in his determination of the 'net project costs, he does not appear to have considered the loss of Industry Canada-Fed Nor funding.'

Council was presented items of consideration by Mr. Poloni and KPMG, detailing ways to which the city could minimize risk so that, in the future, cost overruns on capital projects could be reduced or eliminated, which included prohibiting the use of risky construction management models, undertaking a five year historical review of major projects and by appointing at least two members of council to oversee financial personnel on such projects.

Regardless of his recommendations, it was evident that Mr. Poloni's presentation and report left all of council reeling and feeling jarred.

“I'm in shock,” said Councillor Campbell, after hearing the report in its entirety.

Councillor Mac Bain responded to the report with incredulous anger.

“I have to stop asking questions right now because I feel as though I want to punch somebody in the face, and I don't want to do it to you, Mr. Poloni,” he said.

The report does not blame any councillors or the Mayor for the actions that were taken by members of city staff, saying that there was only one opportunity in which council could have had the chance to know what was going on, with payments certificates which were presented to the Finance Department late in 2013.

“It is in my opinion that you weren't aware, but you could have been aware that these costs had to have occurred,” says Poloni.
Poloni told council that it's their job to assign tasks to staff and not to get involved with aspects of running the city.

Even so, some members of council felt as though they were to blame for Gardens overrun and for the subsequent mess which followed.

“Ultimately, this council is responsible and the fact is that I feel discouraged that I let the community down and those who have supported me for over the last 11 years,” says Mac Bain.

Miles Peters of the Taxpayer's Association, says that he's not surprised by the report's finding that the project went over budget because it was put on the fast-track to completion.

“There's a lot of details that should have been addressed in the early parts of the process and obviously we're paying the price,” Peters says.

It's obvious that the Memorial Gardens project resulted in horrible results, much like the Lakeshore Drive project is quickly becoming, where costs spiral out of control, projects never end and the usefulness of the municipal democratic process is ashen to the demands of the city staff.

Mayor McDonald says that what council now needs to do is to adopt the report's items of consideration.

“I consider them to be recommendations and I'd like to see them passed by council as quickly as possible,” McDonald said, adding, “It’s unfortunate that this project, or any project, went over budget and we have to make sure that we install all the policies and procedures regardless if they were strong in the past, we still need to tighten them up.”

Although the wounds are fresh, the Mayor has not stood up to those who are to blame or asked for the resignation of any city staff member, which could be seen to some as okaying the unauthorized withdrawal of over four million dollars from the coffers without council's permission, to be payed back by the taxpayers, many of whom cannot afford the cost of the already high city taxes.

“This council is trying to move the city forward and do all these different projects and we know that something is going to go wrong,” McDonald says.

“Any leader that believes that everything is so perfect with staff or projects is a fool,” he added.