In a landmark 2018 decision, an Ontario judge ruled that signatory First Nations to the 1850 treaty were owed back annuities after the Crown failed to live up to the terms of the 171-year-old document
Apr 13, 2021 6:00 PM By: Jenny Lamothe, Local Journalism Initiative Reporter 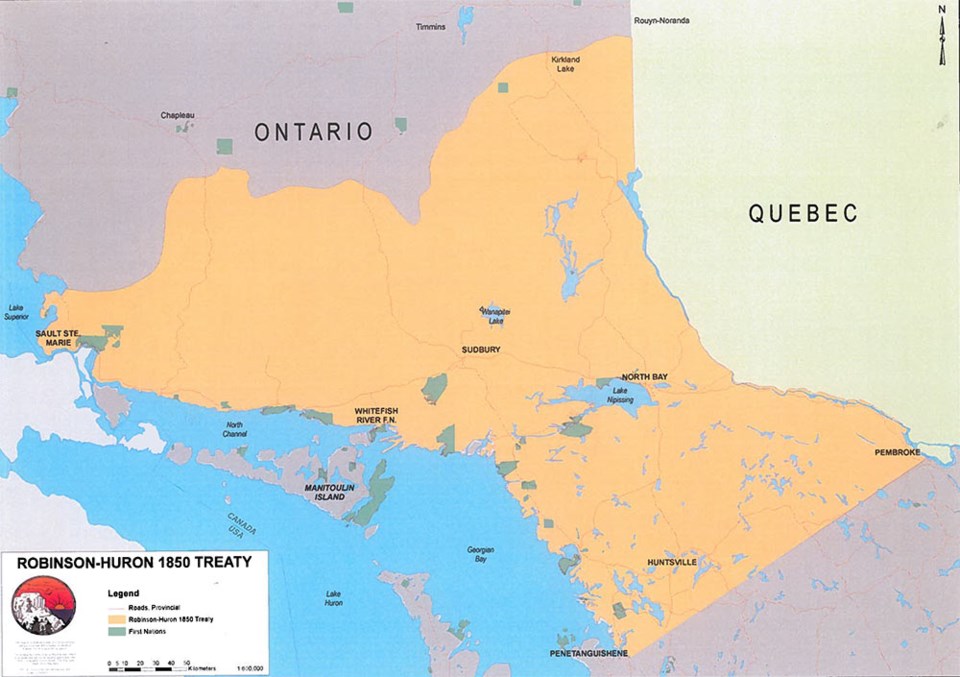 That decision, handed down by Justice Patricia Hennessy in December of 2018, held that “the Crown has a mandatory and reviewable obligation to increase the Treaties’ annuities when the economic circumstances warrant.”

Though the case is complicated, the treaty itself is not, said Chief Dean Sayers in a press briefing on April 12, ahead of the appeal.

“It’s clear, it’s straightforward,” said Sayers, who serves as chief of Batchewana First Nation. “Canada and Ontario need to honour the obligations set out in the escalator clause within the Robinson-Huron Treaty of 1850.”

At the very least, “we’re calling on Ontario to drop the appeal, stop wasting energy, time and money.”

The Robinson-Huron Treaty of 1850 Annuities Statement of Claim, which was launched by the RHTLF in 2014, involves a claim for resource revenues. At the time, the settlers of the area were driving economic growth on land that did not belong to them, encroaching on traditional lands.

Working within a framework that they understood, the sharing of resources for common good, the First Nations of much of Northeastern Ontario entered into a treaty with the Crown, as represented by William Benjamin Robinson, a former mine manager who was named treaty commissioner.

Under the treaty, the Crown promised to pay a perpetual annuity of £600 ($2,400), which in 1850 worked out to approximately $1.60 per person. But Robinson provided an additional incentive for the Anishnawbek communities to sign the treaty.

It is called an ‘augmentation clause’ and it reads “[...] should the Territory hereby ceded [...] at any future period produce such an amount as will enable the Government of this Province, without incurring loss, to increase the annuity hereby secured to them, then and in that case the same shall be augmented from time to time.”

Basically, if further wealth was generated in the territory, the Crown is obligated to increase the annuity “to such further sums as Her Majesty may graciously be pleased to order.”

For instance, picture yourself as a farmer with a field. You grow some corn for yourself, to feed your family, but still have a large parcel of land unused. A new neighbour asks if perhaps they can plant in the soil you have worked and cared for, in return for a portion of the money they make selling the corn they grow. You’re intrigued, but unsure. So they sweeten the pot: the more money they make selling corn grown on your land, the more money they’ll give to you.

But the crux of the issue, and what Justice Hennessy specifically stated in her decisions, is that the Crown, or your neighbour to continue the analogy, failed to live up to their end of the bargain.

Not only was the annuity not raised the first year after the opening of mines everywhere in 1851, but the annuity was not increased until 1874, despite the economic growth on the land.

There has never been another increase. In 2021, that annuity is a cheque for $4 for each person.

The decisions, in what the RHTLF refers to as Stage 1 and Stage 2, both ruled in favour of the First Nations, asserting that Canada and Ontario have a mandatory obligation to review the annuity amount.

While the provincial government is proceeding with that appeal this week, the federal government has declined to pursue it.

Find out more about the case at the Robinson-Huron Treaty Litigation Fund website, www.robinsonhurontreaty1850.com.

Jenny Lamothe is a Local Journalism Initiative reporter at Sudbury.com. She covers the Black, Indigenous, immigrant and Francophone communities.