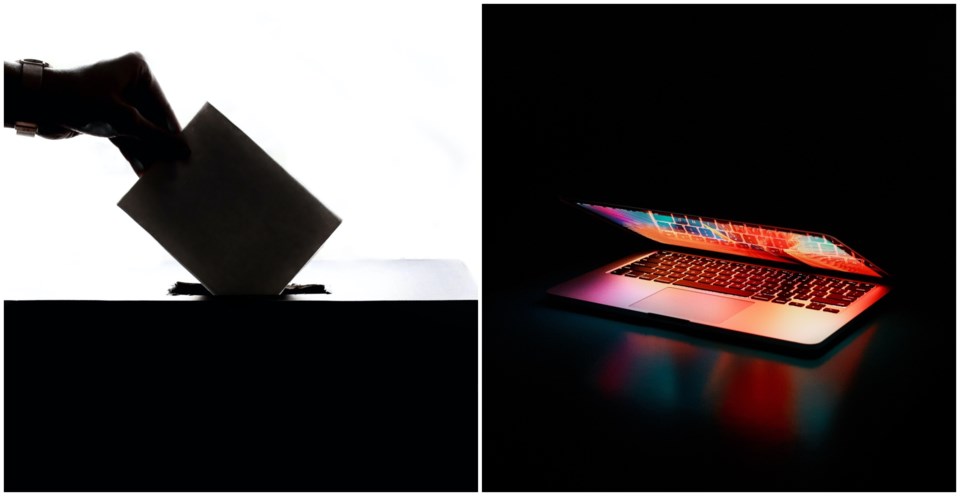 Locals will have a choice when it comes to how they vote in future elections.Stock images/Pexels

When local voters select their municipal and school board representatives on October 24, 2022, they will do so via a hybrid voting system.

Under the hybrid model, eligible citizens will have the choice of voting electronically in online polls leading up to, and including, voting day. Help centres will be available to guide online voters through the process. Online voting is expected to start two weeks before election day.

Voters will also have the option to make their selections in-person on election day and those votes will be counted using tabulators. There will be no more physical advance poll locations at which to vote before election day.

Instead, computerized "super polls" will be established for election day, combining 11 traditional polling stations into four. Voters will be not be assigned a polling station and will be able to vote at one of any of the four super polls. Special polls will continue to be held at nursing homes and long-term care facilities.

When the voting method was discussed at the committee level, Coun. Mark King expressed concern about reducing the number of polling stations from 11 to four, in light of public health measures and possible limits on gatherings.

McIsaac said the 2018 election revealed frustrations from the public about the lack of online voting and the thinking is if that method is made available fewer voters will attend the physical polling stations.

"We're planning on having the four super polls in large spaces, such as Memorial Gardens, so there is plenty of room if we needed to take precautions," McIsaac advised.

Greater Sudbury and Thunder Bay use the hybrid voting method, according to City Clerk Karen McIsaac. A representative from Timmins advised there was an increase in total votes cast in 2018 using the hybrid method.

With recent council approval, Sault Ste. Marie voters may register to vote by mail in the next municipal election, according to SooToday. The city clerk's department had recommended a $320,000 election with paper ballots cast in person, then scanned and counted using portable tabulators.

According to the associated report prepared by McIsaac, almost half of the municipalities in Ontario used exclusively electronic voting in the 2018 elections, noting negative impressions of the method may have developed due to bandwidth issues that forced some extensions of voting periods, including in Greater Sudbury.

While the City of North Bay will use the hybrid model, McIsaac writes many municipalities have "moved to internet voting as it is a fast and efficient voting method. Online voting users have found it simple, convenient and private."

The move to the hybrid voting method also comes at a cost. "This hybrid option would result in higher costs for the 2022 election of approximately $100,000, if not more, than the 2018 election."

The 2018 elections cost the municipality approximately $225,000. According to the report, "the lease of the tabulators, salaries of the election workers, ballots and postage to send the voter identification cards," all contributed to the overall cost.

Electronic voting only has an estimated cost of $150,000, according to McIsaac's research. The selected hybrid model has an anticipated cost of $350,000.
"That $350,000 cost is something we might want to think about," observed King during the committee meeting in June.

Deputy Mayor Tanya Vrebosch acknowledged the increase in cost but countered the alternate method increases accessibility so more citizens can vote. McIsaac pointed out the online option could eliminate the use of proxy votes.

"By combining these two methods, there is an additional expanded coverage for voters not able to vote in-person and for those who may prefer the convenience of alternative voting," per McIsaac's report.

"Having the option to vote in-person assists those in the community with problematic internet coverage and those who feel unable to use an online system due to their technological awareness or accessibility needs."

Other options considered at the committee level included the traditional — and now former — method of solely in-person voting with the use of vote tabulators; the use of electronic voting as the only method of the vote; and, vote-by-mail.

The report notes, "There would be a requirement for the City to fully understand the logistics of this hybrid model to ascertain how to ensure the integrity of the voters’ list."

An RFP has been issued by the City to facilitate the implementation of the hybrid voting method.

The COVID-19 pandemic also factored into the decision as it has brought public health measures — including the need for physical distancing for segments of the population — to the forefront as it is "still unknown how long the safety and emergency measures which have been implemented will be in place. It is possible that there may be another wave of COVID-19 or another pandemic which may limit the ability for the public to gather in groups, impacting the method of voting."