Christopoulos twins adjusting well to life in the OHL

'We’ve been practicing really hard over the summer, and we all had a good training camp and I mean, most of our team is made up of rookies so we have to help the older guys do what they need to do'
Sep 30, 2019 1:00 PM By: Matt Sookram 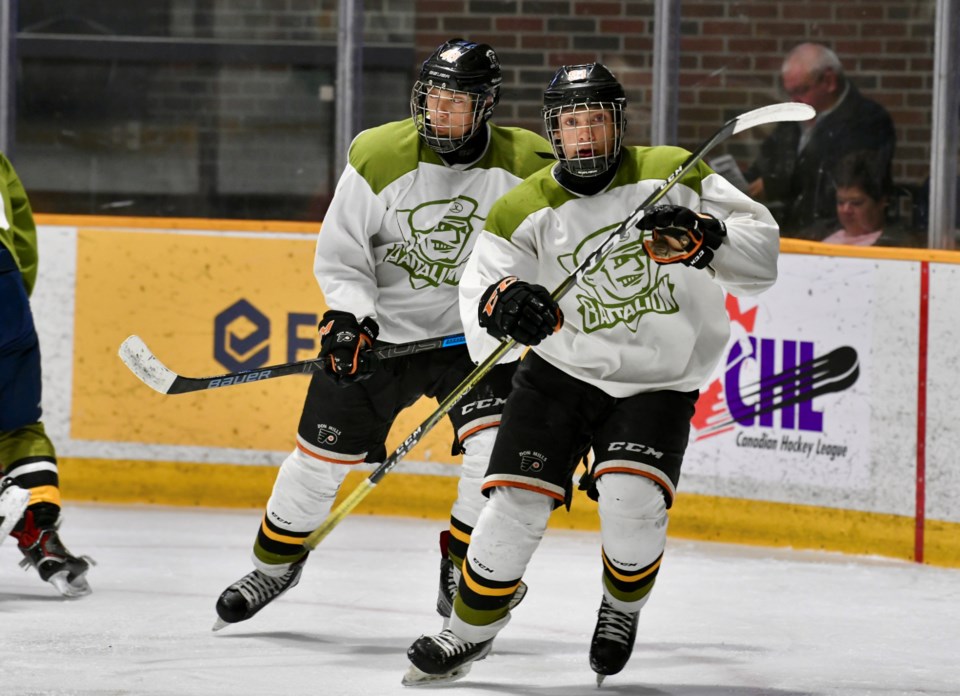 Paul and Alex Christopoulos at the spring orientation camp. Photo by Tom Martineau/BayToday.

Paul is the one with the longer hair, Alex keeps his short. That’s one way to tell the Christopoulos twins apart, which doesn’t help a broadcaster all that much, considering they are wearing helmets. At least they don’t play the same positions and their jersey numbers, 4 and 25, are far enough apart to not get confused…most of the time.

“You’ll figure it out pretty quickly,” Paul assures me, when I tell them it may take a while for me to figure out who is who when they aren’t on the ice.

“I have the longer hair, and we walk differently,” he added when asked about how the rest of the team is trying to figure out which brother they are talking to. “Usually, he has more facial hair,” Paul says about his brother Alex.

The twins arrived in North Bay after being taken one round after the other in the 2019 OHL priority selection, with Defenseman Paul chosen in the 2nd round, 38th overall and Right Winger taken 3rd round, 50th overall.

Just two weeks (four games) into the 2019-20 OHL season, the brothers are already showing signs of learning and adapting to the Ontario Hockey League’s high level of play.

“Feeling pretty confident (about our play) but these first few games have been much quicker than last year (in minor midget with the Don Mills Flyers),” said Paul.

“These guys are a lot sharper, with a high IQ,” he continues. “They know what they are doing, they are committed to their systems and we just have to play around that and we have to adapt to the game itself.”

Alex says, “I thought I did pretty well (in my first couple of games). We were working for pucks and we just need to get faster and keep going.”

Both brothers have already put up their first career goals, and have shown flashes of why they were so highly touted coming into this past April’s draft.

Fun footnote too that is the twins earn those goals in back to back road games in which the Battalion was playing against one of their former goaltenders (Christian Propp in the Soo and Christian Purboo in Sudbury) though neither Alex nor Paul had ever suited up alongside those goalies.

“I was really excited, it was a lot of hard work from the boys to, with the fore-checking pressure. We stole the puck, made some nice passes and it resulted in a goal,” said Alex.

“I didn’t know what to think, I just wanted to go in a give the boys a hug I was so excited.”

His goal got the Troops to within one in a 4-3 game at the time against the Soo. The result was an eventual 6-4 loss, but it sparked a spirited comeback for the Battalion in the third period of that game. Contrast that to Paul’s first goal that also came in the third period, but the Troops trailed 11-2 at the time it went in.
“When I scored it, we were already down by a lot of goals, but I’m still happy that I got my first goal in the OHL but at the same time, we can’t really celebrate,” Paul said after the game in Sudbury.

But both Alex and Paul maintained a very mature, business-like attitude about their first goals as if they expected it to happen early on, and they expect more to come as the season continues.

Alex had an amazing 49 goal 93 point season in 43 games with the Don Mills Flyers going into his draft year. Paul countered with 22 goals and 67 points on the back end in 67 games played.

Players don’t always replicate their minor midget statistics in their first year in the OHL, in fact very few ever get close. But the Christopoulos twins have the makeup to be very productive players, regardless of how many points they finish with.

After the first three games of the season, the Battalion coaching staff had nothing but good things to say about the “rookie group” for the team.

“I like all our young guys,” said Battalion Head Coach Stan Butler, following the teams first win (3-2 in overtime) on Thursday, September 26 against the Kitchener Rangers.

“They’re bringing it every game. What they’re doing is raising the level of the older guys by the way they’re playing, which is really encouraging.”

“We’ve been practising really hard over the summer,” says Paul upon hearing the good feedback from the coaching staff.

“And we all had a good training camp and I mean, most of our team is made up of rookies so we have to help the older guys do what they need to do.”

As one of the six defencemen to get into every game this season, Paul says he’s learning to keep up with the forwards rushing into the zone. He says, “You have to stick to your man and just position yourself well. These guys are shifty, they make really good quick passes, and they will bump you off the puck and get the better body position. You have to know how to handle that and know what you’re doing on the ice and know who you’re playing against.”

Upfront, Alex adds “there’s a huge focus on the two-way game, hockey is played in all three zones so we have to be good on defence, which will lead to us being good on offence. That’s how we’re going to produce.”

They are committed to developing as individuals both on and off the ice.

“My goal this year is not to just be as good as everyone else, but every day just be better. Showcase myself and my skills and show that I can be a team player,” said Paul.

“Give everything I got and work hard on every shift,” says Alex. “And we want to win more games.”

Now those are goals every player, at any age, should have.