Charlie Angus is the everyman who has been everywhere, man

Timmins-James Bay MP makes a stop in North Bay to drum up support for NDP leadership bid (and promises he'll be back)
May 1, 2017 10:30 AM By: Stu Campaigne 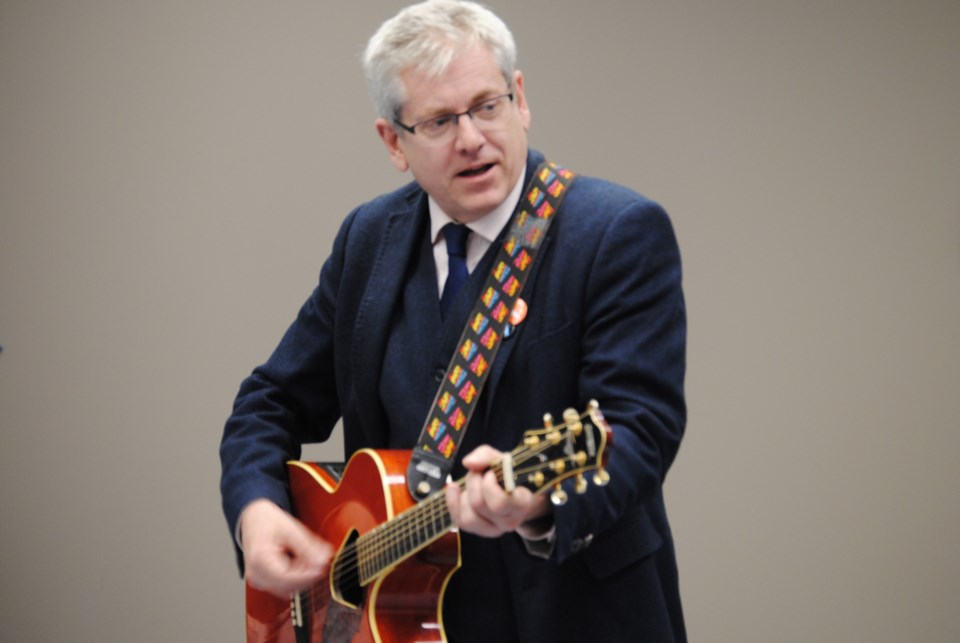 "I'm looking at North Bay as being ground zero, right now, of the attack on public services. What North Bay has gone through in the last few years, with the attack on the ONR [...] with the P3 at the hospital, with CUPE strikes and lockouts." - MP Charlie Angus

Before meeting with the media and answering questions from the public following a speech Sunday outlining his federal NDP leadership platform, Charlie Angus, theTimmins-James Bay MP since 2004, played his guitar and sang a song. "I've Been Everywhere," a country classic covered by (among others) Johnny Cash and Stompin' Tom Connors, lists in its lyrics all the places the singer has been.

The version performed Sunday at a meet and greet at the OPSEU office in North Bay had a humorous Canadiana twist to it and put Angus' folksy charm on full display. Born in Timmins, Ont., the affable Angus has embraced, if not celebrated his non-traditional background (for a politician).

Angus has played in a punk band, had a video air on MuchMusic, has been twice nominated for Juno Awards, worked as a journalist, dishwasher, roofer, is the author of seven published books, ran a homeless shelter with his wife, and famously was denied Holy Communion by his priest over his vote to legalize same-sex marriage.

When Angus presents himself as the everyman, he relates to both white collar and blue collar workers.  Angus has been both and notes that the middle-class that he grew up in has vanished. Angus hammered home his point Sunday that the middle-class reality in Prime Minister Justin Trudeau's Canada is completely altered from what it was a generation or two ago. "The new working class is white collar. It's professional workers, working endless contracts, short-term work, with massive levels of student debt," said Angus.

"The contract has been broken between the Canadian people and the capitalist class in this country," said Angus, "we have to re-establish some of that fairness.

"We're going to use the tax code to help the people who are just getting by. We can use an economic argument that giving people money for diapers for their kids who have to work three jobs to pay the rent makes, that's money that goes right into the economy. That makes good economic sense. How about saying that makes good moral sense?"

Angus set out three pillars for his leadership run: environmental justice, economic justice, and Indigenous justice. Angus spoke several times about meeting greenhouse gas emission standards and Angus has been the critic for Indigenous and Northern Affairs and was the co-founder of Shannen's Dream, a campaign highlighting the sad state of First Nations education that, in 2012, saw Angus' motion pass unanimously through the House of Commons.

Local labour leader Henri Giroux asked Angus about the Energy East pipeline controversy, as it related to North Bay, and his take on the matter. "We have a prime minister who has approved three pipelines in the first year. The very first move Justin Trudeau made as leader was to go to Washington and say that Stephen Harper wasn't working hard on Keystone [...] It's a no go for me on the Energy East project."

On mobilizing new voters and energizing repeat voters, Angus observed that there "are more and more people who are completely tuned out of politics altogether. And they are across party lines because they don't believe that Ottawa speaks to them at all. We have to bring those people in, those are people who are New Democrats and don't know it."