Canadore College to receive provincial funding for the trades

'So this funding to Canadore today is going to go a long way to solving local needs and to get more people into the trades'
Feb 3, 2020 4:00 PM By: Chris Dawson 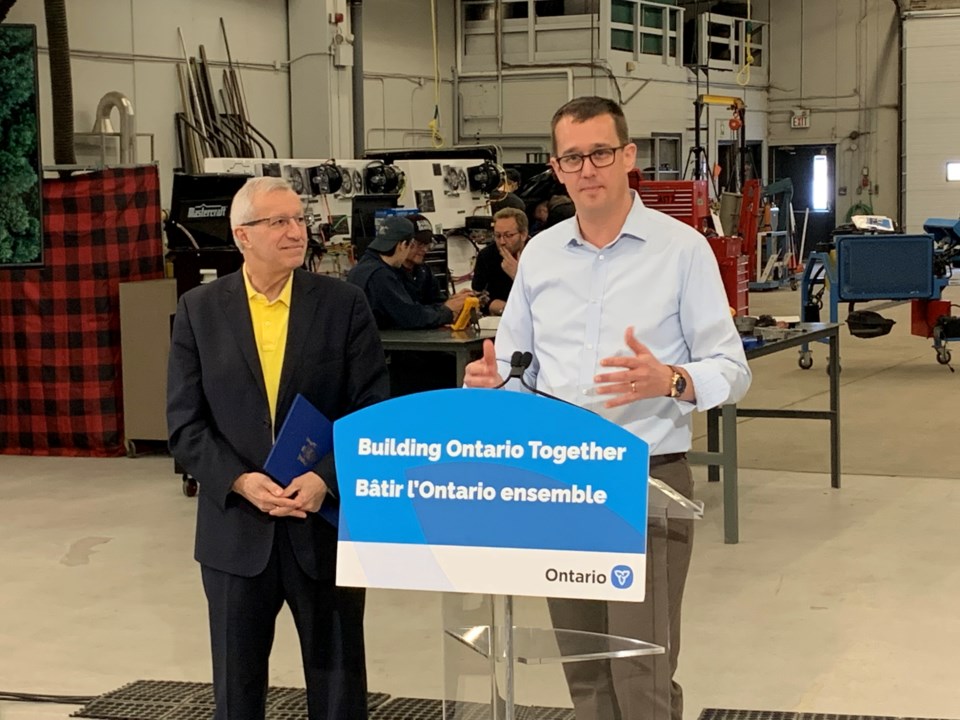 Monte McNaughton, Minister of Labour, Training and Skills Development at a media event at the Canadore Commerce Court campus.  Photo by Chris Dawson/BayToday.

The provincial government is hoping a school like Canadore College will help with a serious issue in Ontario. That is a lack of trades workers.

"We know that every single day that almost 8,000 jobs are going unfilled province-wide it is 200,000 jobs that are going unfilled every single day and it costs the provincial economy $24 billion because businesses cannot find the workforce to staff their companies," said Monte McNaughton, Minister of Labour, Training and Skills Development at a media event at the Canadore Commerce Court campus.

The funding will support:

"So this funding to Canadore today is going to go a long way to solving local needs and to get more people into the trades as well as to benefit the local health care sector by training more PSWs," added McNaughton.

George Burton, Canadore College's president, is thrilled with the funding.

"So what we are providing is greater access to students that have interest in not only skilled trades but in the apprenticeships as well and as you heard there is a shortage in the province so there are wonderful career opportunities at the end of this," said Burton.

"So we see an increased number of students in these programs moving forward using the ministries investment and our ongoing investment in skills and trades here in Canadore."

The announcement comes on the heels of a new government marketing campaign highlighting the skilled trades as a viable career path. The ads, which use the slogan 'Find a Career You Wouldn't Trade,' are currently running online, in movie theatres and on Tim Hortons TV.

"We need to let young people know they are a viable first career choice. This is especially crucial as Ontario faces the looming problem of our existing skilled tradespeople retiring faster than we can replace them."