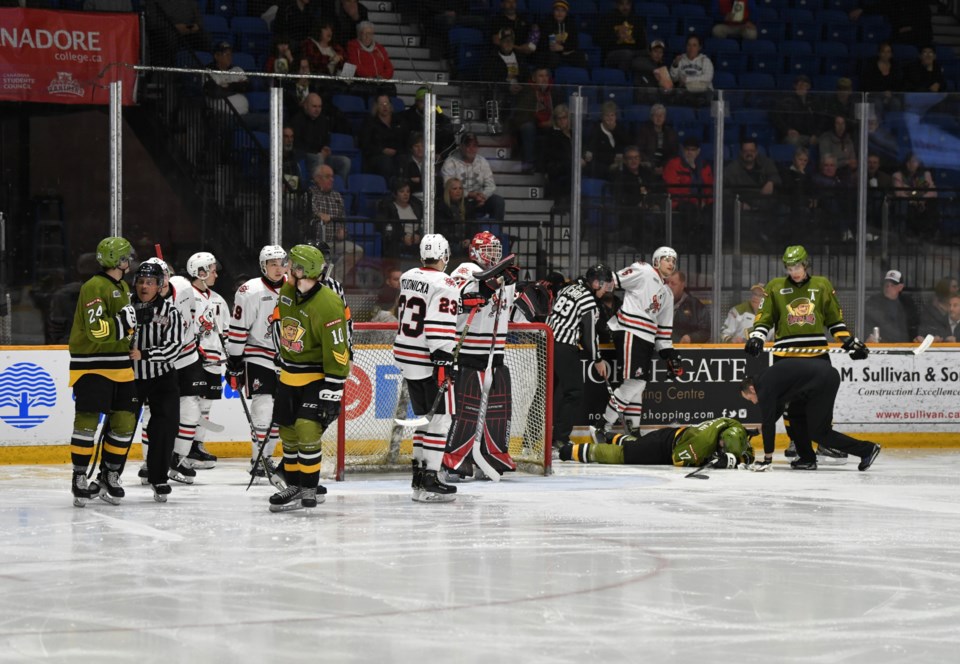 A few tense moments for Battalion fans as Justin Brazeau takes his time getting up after an illegal hit by Jacob Paquette. Photo by Tom Martineau/BayToday.ca.

Justin Brazeau will not let a nasty hit by Jacob Paquette stop him from helping his team to get back into the series.  The IceDogs forward got a five-minute boarding penalty and a game misconduct for a vicious hit on Brazeau during third period action on Tuesday night.  Brazeau got up slowly and returned to action.

“It’s playoffs, it is always physical out there. I was not really expecting it but I just caught my breath there a little bit and I was fine,” he said.

If the Battalion want to get back into the series, they realize a good first 10 minutes is key.

“I think for our group we need everybody to be ready to play,” Battalion assistant coach Adam Dennis said Wednesday during a media conference.

“I don’t think we had that Tuesday. In this kind of series, when you’re playing against a skilled team like Niagara, everybody needs to be going, and I don’t think we were up to the task.”

Brazeau agrees and attention to detail will be key.

“I thought in the first two games we did a better job of that,” Brazeau said referring to their starts in the series.

“Their first goal, it was a bad line change and they get a goal. Then a puck goes off a skate. It was a 6-0 game but I think some of those goals are preventable by us and it is not just what they are doing so well it is what we are doing to ourselves so if we are able to clean that up, end of the second and early third we had some chances. I think if we score it kind of changes the outcome of the game.  If we clean up little things like that we will be fine,” continued the Battalion captain.

The Troops, who are down 2-1 in the best-of-seven series with the Niagara IceDogs.  After evening the series at 1-1 with a 5-2 game two win, the Battalion came home Tuesday where the IceDogs cruised to a convincing 6-0 win.

The IceDogs, who were the league’s top scoring team this season, are renowned for their quick starts.  The Battalion will need to contain the IceDogs snipers early if they want to even this series at 2-2.

“The last 16 games coming into the playoffs Niagara was 15 and one in (first) scores, so we know that they’re a good-starting team,” said Dennis.

“For us it’s important to match and exceed their intensity, especially at home.”

Puck drop for game four is set for 7 p.m. tonight at Memorial Gardens.