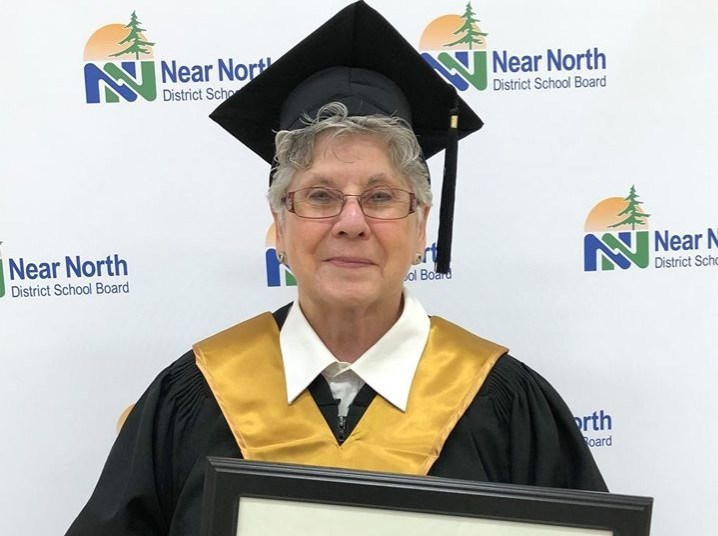 Anita Restoule is a quilter.

When she starts a quilt she says she has to finish it.

But for many years, the 77-year-old from Sturgeon Falls did not know how to weave a journey towards acquiring her high school diploma.

Restoule recalls when she was 15, her dad told her she had to start to take care of herself on her own.

She says that decision by her father forced her to drop out of the Sturgeon Falls High School, as it was called back then, and take on a job at the local IGA that had just opened.

"That was in November and I had just started grade 10," remembers Restoule.

That is just what Anita did, as she got married a year later and started her life and her own family.

However, even after years of working retail and in health care as a personal support worker, she always regretted not getting her high school diploma.

"There are things I had not finished in my life and I wanted them finished. This was one of them, to finish my grade 12. So that was very important for me to get that done and I thought, at my age, I am running out of time."

Restoule had looked into going back to school in Sturgeon Falls, but the only program available to her only accepted those between the ages of 64 and 19.

Then, her granddaughter found out about the Laurentian Learning Centre in North Bay, and they welcomed Anita in the fall.

Amy Johnson is a continuing education teacher at the Learning Centre.

"We do see a lot of mature students but we do not often get students that are in their 70s so that was really neat," said Johnson about Restoule.

In November of 2019, the work began for Restoule to get her diploma more than 60 years after she left school.

"I did not think I would be able to find a place that would accept me at my age but they did and they are wonderful," said Restoule.

"I had less work than I thought I would have to do, but it was still hard because I am not computer-wise so I do not have a computer or a laptop. I don't even own a smartphone. I did it the old fashioned way with an old dictionary."

Restoule found out that school in 2019 was much different than school in the late 1950s.

"A lot of the stuff today did not even exist when I was in school," she said.

"Questions on nuclear power, for example, we did not talk about that 62 years ago."

However, Restoule was able to compile an impressive portfolio that caught the educators off guard.

"She came back with this giant portfolio," said Johnson.

"She had about five different packages put together about work experience, volunteer experience, life experience, hobbies, interests and I have never seen anything like that before.

"She pieced at all together with news clippings, letters and handed it into us and we were kind of blown away because we never see something like that. She completed four other booklets based on prior knowledge so it was English, math, science, and geography."

Sean Ruddy is the principal at Laurentian Learning Centre.  He was the one who signed her diploma earlier this week. He says she is an inspiration to students of all ages.

"The one thing about continuing education is that we can provide assessments for mature students and grant them some equivalency credits so graduation is not as far away as most people think," explains Ruddy.

"We can bring the finish line a lot closer and they can finish up their remaining credits to graduate; for example, Anita started the process in November."

Restoule says now she is getting questions as to what University she is going to apply to now, but she insists she is not looking for a job so she is not going down that path.

"It is something I never thought I would achieve," she said.

"I am almost overwhelmed thinking about how I was able to do this. I am not smart, but I had good marks, I surprised myself."

She does hope by sharing her story, she can help someone else find the confidence to go back to school too.

Over 130 attendees jam into Northern Ontario Ag Conference
Feb 22, 2020 12:00 PM
Comments
We welcome your feedback and encourage you to share your thoughts on this story. We ask that you be respectful of others and their points of view, refrain from personal attacks and stay on topic. To learn about our commenting policies and how we moderate, please read our Community Guidelines.