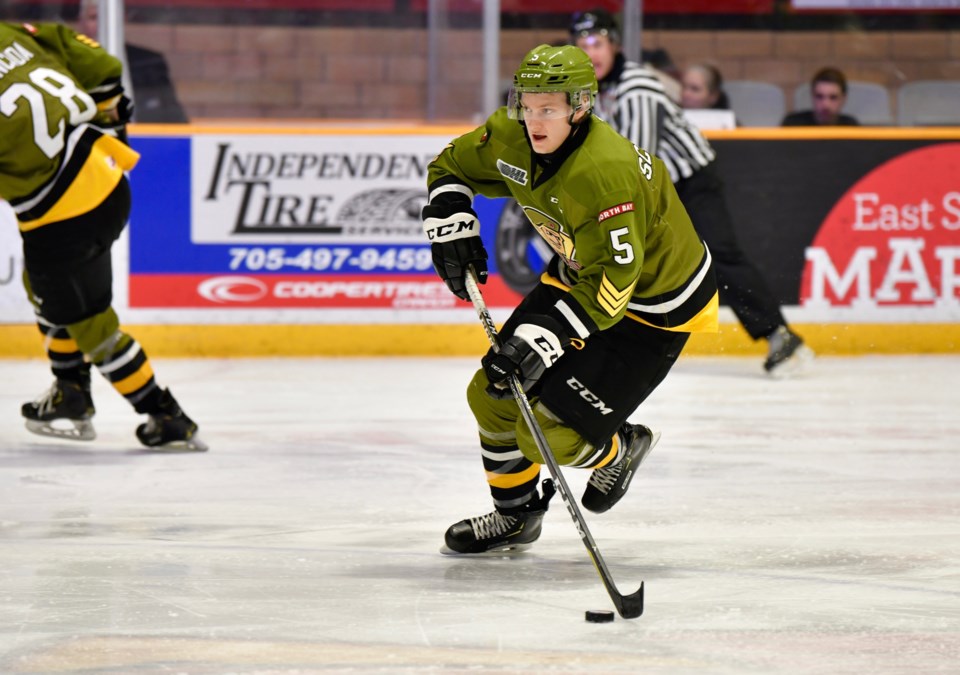 Pacey Schlueting in action with the Battalion. Photo by Tom Martineau/BayToday.

Schlueting joins a long list of Battalion first-round selections who have been traded since the team moved to North Bay in the fall of 2013. That list included another North Bay native, Brady Lyle who was a first-rounder in 2015 OHL Priority Selection.  Others traded include Brandon Robinson (2011), Blake Clarke (2012), Brett McKenzie (2013), Zach Poirier (2014), Lyle, and Adam McMaster (2016).

As part of the latest trade, the Battalion swapped two third-round OHL Priority Selection picks, in 2021 and 2023, and a 15th-rounder in 2023, all of them conditional, for Russian import Guskov, a 19-year-old who scored 16 goals and earned 14 assists for 30 points with 48 penalty minutes in 62 games last season.

The Knights selected Guskov, a six-foot-one, 179-pound resident of Nizhnekamsk, in the first round of the 2018 Canadian Hockey League Import Draft.

“The addition of Matvey will add veteran depth to our forward group,” said Adam Dennis, the Battalion’s general manager in a release.

“We also feel he has an untapped offensive potential which should mesh well with some of our top offensive players. Coming into his third year he’s highly motivated, and we’re thrilled to have him join our group.”

The Minnesota Wild chose Guskov in the fifth round of the 2019 National Hockey League Draft.

The picks sent to London originally belonged to the Oshawa Generals and Sudbury Wolves respectively. The Troops still have one third-rounder in 2021, two in 2022 and four in 2023.

The Battalion received a fourth-round choice in 2024 and a 12th-rounder in 2023 for Schlueting, a North Bay native who was the club’s first-round pick in the 2018 OHL Priority Selection from the North Bay Trappers minor midgets. The 2023 pick originated with Oshawa.

“Pacey is a player who’s grown immensely over the last two seasons, especially in the back half of last year,” said Dennis.

“The Battalion has the utmost respect for him and his family and feels this move will open up opportunities for him to grow as a player and a person. We thank him for his contributions and wish him all the best in Saginaw.”