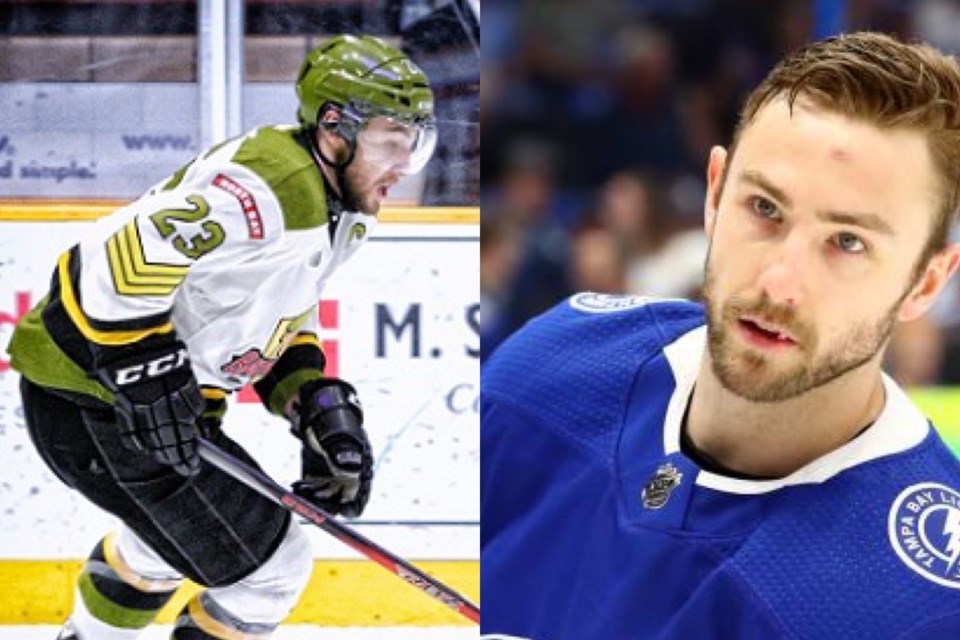 There's a saying that goes, "don't try to prove people wrong, try to prove to the people that believed in you they were right."

Well, Barclay Goodrow is proving the North Bay Battalion and its fans were right that he was good enough to play in the National Hockey League despite going undrafted.

The 27-year-old is getting tremendous praise from the hockey world as he has played a key role with the Tampa Bay Lightning as they punched their ticket to the Stanley Cup finals with a 2-1 overtime victory over the New York Islanders in the Eastern Conference Finals.

In fact, the Battalion alum set up Generals alum Anthony Cirelli for the overtime winner on Thursday night.

"It is funny how that goes," Battalion head coach Ryan Oulahen said about the rivals combining for the series-winning goal.

"I know I have had experiences like that too and I am sure that Barclay and Anthony have probably become good friends and they can share those moments together and probably keep razzing each other about the back and forth series that we had and those moments. They are two really good, smart players and the game-winning goal is a prototypical hard-working play by Barclay and he finds Cirelli in the slot for a really nice goal."

Goodrow, who was traded from San Jose to Tampa Bay for Anthony Greco and a 2020 first-round pick has been a pleasant surprise in this strange playoff year.  The former North Bay Battalion captain is among the league leaders in blocked shots and hits in the playoffs while adding one goal and three assists in 17 playoff games.

Oulahen, who was an assistant behind Stan Butler for four of the five seasons Goodrow spent with the Battalion organization, is not surprised.

"Any of us that know Barclay knew the value he could bring instantly to a team," said Oulahen.

"When you think about the time of year when you have got to win and you need a guy to go to war with, so to speak, that is the type of person and player that you need."

Oulahen believes North Bay fans got to witness his best year when many fans back then were saying he should be the honourary mayor of North Bay.

"How many times were we down, or even in the third period, and Barclay found a way to get a big goal or make a big play, a big hit, big face-off or a big penalty kill," said Oulahen.

"Barclay has just been able to keep that repertoire and he's doing phenomenal. There is no doubt, the five years he spent that he was well prepared to have a good long career in the NHL."

Goodrow also has an opportunity to make some history in the coming weeks. If the Lightning defeats the resilient Dallas Stars in the finals, he would become the first Battalion alum to ever hoist the Stanley Cup.

"I think it would mean a lot," said Oulahen about Goodrow.

"What I mean is he is kind of the first player from the Brampton-North Bay Battalion era. He played in both locations. To hear on the radio that Barclay Goodrow, former captain of the North Bay Battalion helped set up the series-winning overtime goal is just really cool. Knowing Barclay, and hopefully, this can happen I'm sure he would find a way to celebrate this with his North Bay fans and it would be really cool.

"Selfishly for me, I have been able to keep in touch with him so I think it would be really cool to see him hoist it."

Local school honours frontline workers
Oct 30, 2020 5:00 PM
Comments
We welcome your feedback and encourage you to share your thoughts. We ask that you be respectful of others and their points of view, refrain from personal attacks and stay on topic. To learn about our commenting policies and how we moderate, please read our Community Guidelines.