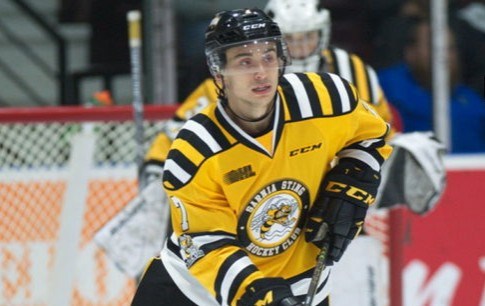 The Troops shipped Sarnia a conditional fifth-round pick in the 2022 OHL Priority Selection for Grima, who becomes the fourth overager on the Battalion roster.

“He’s a right-shot defenceman, which we lack,” Stan Butler, director of hockey operations and head coach, said of Grima, who stands six feet and weighs 197 pounds.

“He has some experience playing on the right side. He’s a good puck mover and he defends well.”

Grima, a second-round pick, 25th overall, by the Peterborough Petes in 2015 from the Toronto Titans minor midgets, played 73 games with Peterborough over one and a half seasons before being traded to Sarnia during the 2016-17 campaign.

He was also received an invitation to the Toronto Maple Leafs rookie camp in 2018.

Grima has played a total of 235 OHL games, scoring 10 goals and earning 67 assists for 77 points with 157 penalty minutes. He had four goals and 26 assists for 30 points, amassing 82 penalty minutes, in 65 games last season but hasn’t played in the current campaign as Sarnia has had five overage players on the roster.

”On behalf of the entire Sting organization I would like to thank Nick for all of his efforts with our team as well as his dedication to our community over the past two and a half seasons," stated Nick Sinclair, GM of the Sarnia Sting.

"We wish him all the best as he transitions to the Battalion and onward in his hockey career. “

OHL clubs are permitted to carry unlimited overagers until Nov. 10, when the number must be cut to four. A further reduction to three is required by Jan. 9, a day before the trade deadline.

However, no more than three may dress for any given game at any point in the season.

The 1-5-0 Battalion entertain the Oshawa Generals at 7 p.m. Thursday.

'Cash-strapped' YMCA remains committed to community
Jul 9, 2020 11:00 AM
Comments
We welcome your feedback and encourage you to share your thoughts. We ask that you be respectful of others and their points of view, refrain from personal attacks and stay on topic. To learn about our commenting policies and how we moderate, please read our Community Guidelines.