Author tells the whole story about the Dionne Quints 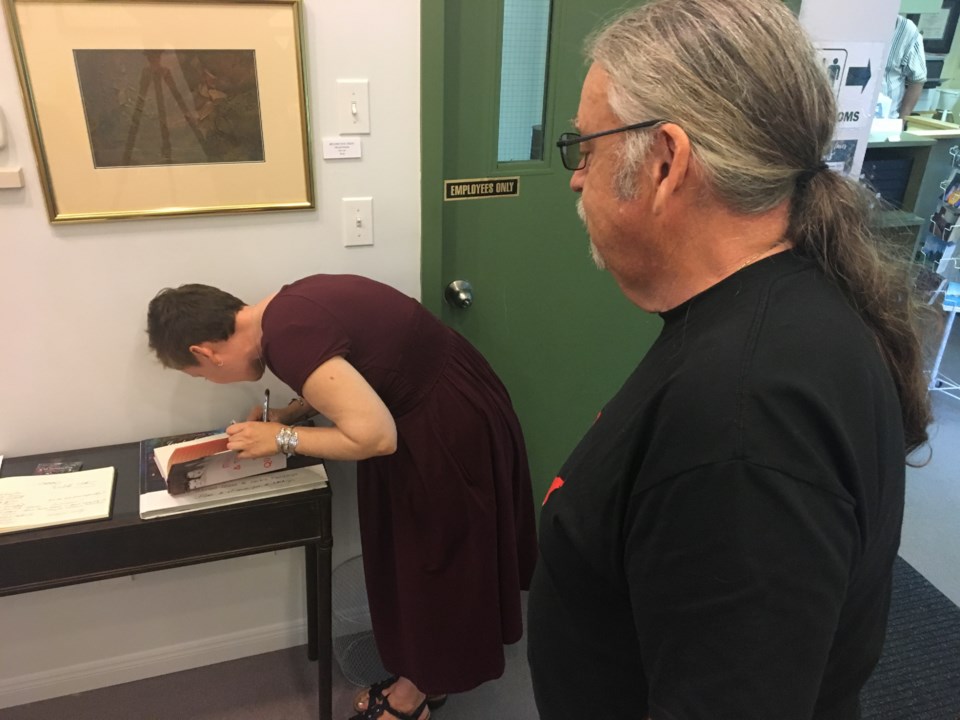 Author Sarah Miller signs her new Quints book The Miracle and Tragedy of the Dionne Quintuplets for a fan. Photo by Chris Dawson/BayToday.

It is a story that Sarah Miller literally stumbled upon, but when she found out about the Dionne Quints she was hooked.

“I stumbled into it in a kind of silly way,” admitted the Michigan author.

“I had a set of Quint dolls as a kid that had nothing to do with the Dionnes. They were put out by Tyco and they were called ‘The Quints’"

So one day she decided to look for them in her attic, curious to see if they were worth something on eBay.

“Guess what happens when you type ‘Quint Dolls’ into eBay? You find Dionnes galore,” she said.

“They were familiar to me because I think my grandmother was a fan, so I got three books from the library and a read them all in one weekend and kaboom, I was off.”

At least four visits later and hours of research lead the well known historical author to write a book about the famous North Bay area family called "The Miracle of Tragedy of the Dionne Quintuplets."

“It is a big story,” said Miller, who did a book launch at the Callander Museum on Tuesday afternoon.

“Since Pierre Burton’s book in 1977, there has not been a really objective all-around account to the present day of the story.”

Miller says there have been memoirs but she believes her book brings the story together.

“Everybody tells their piece of the story but this is not one person’s story and it is not even five peoples’ story. It is Yvonne, Annette, Cécile, Émilie, and Marie. It is Mr. and Mrs. Dionne. It is the siblings who are so often overlooked, it’s the doctor, the nurses. It is big and I wanted more voices to be heard in one place,” she said.

While there has been much controversy surrounding the Quints since their birth in 1934, Miller says she stayed away from that in her book.

“There is a lot of blame and there is a time when blame is appropriate in this story certainly, but Cecile Dionne has said there are no villains in this story, this is a story of good intentions gone awry,” said Miller, who is also the author of The Borden Murders.

Natasha Wiatr, the curator of the Callander Bay Heritage Museum, was thrilled to have Miller do the book signing at their museum which has a historical connection to the Quints. The museum is the former home of the Quints physician Dr. Allan Dafoe.

“We are very dedicated and very passionate about telling the story and about presenting as many different versions and perspectives of the story as it is a controversial one. We felt that Sarah’s book really captured a lot of those different sides in a cohesive and well- researched manner and we are very happy to be hosting her today,” said Wiatr.