Only lab in the country which looks at effects of testosterone on competitive, aggressive, risk taking behaviour in people.
Mar 2, 2017 1:32 PM By: Chris Dawson 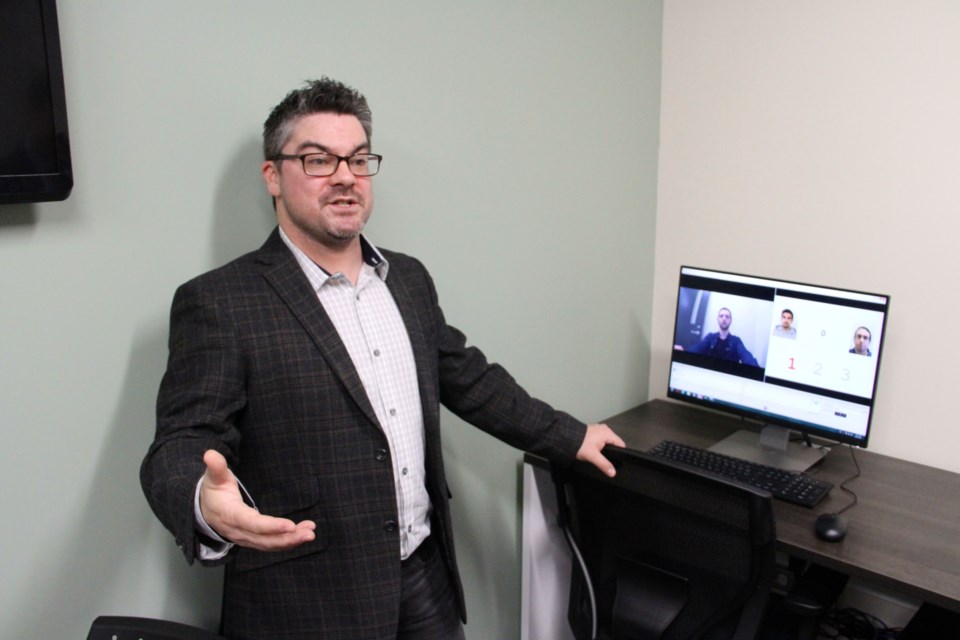 Dr. Justin Carre' shows off his unique face reader software that is part of his state-of-the-art aggression research. Photo by Chris Dawson.

A Nipissing University based research program which is looking at the impact testosterone has on aggression, received a big financial shot in the arm today by the federal and provincial governments.

The federal amount of $128,811 -  is being matched by the provincial government - and is being used to triple the size of the research space on campus from 450 square feet to about 1,500 square feet.

Nipissing assistant professor Dr. Justin Carre’ is leading the research.  He says they are the only lab in the country which is looking at the effects of testosterone on competitive, aggressive, risk-taking behaviour in people.

“Some people will look at it correlational and they will just measure testosterone which varies in people’s bodies and then they will see how it relates to behaviours,” stated Carre’.

As part of the unique research Carre’ and his students are administering testosterone to healthy young men.

“So we look at how it can rapidly effect behaviour within 30 minutes to one hour after drug administration.”

The labs allow the test subjects to play unique video games which provoke aggressive behaviours in the users, and the computer software will measure facial expressions to help gauge the anger in each subject.

“So far our data is indicating it [testosterone] doesn’t cause aggression in everyone, it causes aggression in only certain types of people - some people who are impulsive or others who have this desire for power and influence over others,” said Carre’.

“For these types of people testosterone really does matter in terms of how they respond to provocation whereas people who are not impulsive or not power-seekers, testosterone doesn’t really do anything in terms of aggressive behaviour, at least how we measure it in our lab here.”

Nipissing-Timiskaming MP Anthony Rota played with the software during the press conference and tour of the lab.

“I am confident the lab facility led by Dr. Justin Carre’ will continue to contribute breakthrough research in the growing field of social neuro-endocrinology,” stated Rota.

The new lab will allow Carre’ to gather his data in a much quicker and efficient manner.

Carre’ hopes the research will give him a better understanding about how and why certain people fall victim to road rage or why others get upset through using social media.

Maybe with better understanding this research will help identify some of those causes and come up with preventive measures that the public around the world can use to make the world a less aggressive place.