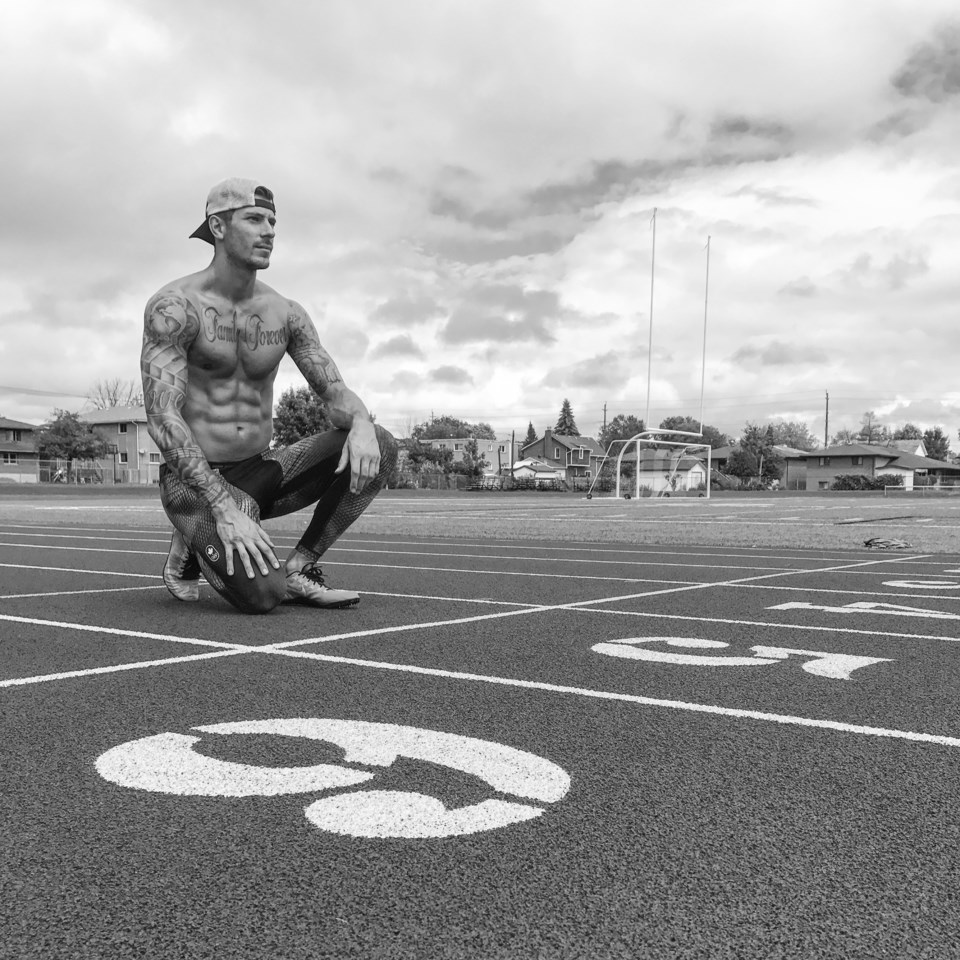 Nick Laporte has never been afraid to chase a dream.

When that dream was shared by a friend who passed away in May, that drove the North Bay athlete to work even harder to make the dream a reality.

In 2016, the former local junior hockey star with the North Bay Skyhawks had just finished a season playing professional hockey in the Czech Republic.

His friend Mariano Ezeta, who was an up and coming track star at the University of Calgary, asked Nick to start training with him to prepare for another season of pro hockey.

“He basically just told me to come out to a practice when they started up in the fall and just see how I liked it, and if I was able to run with them, time wise, then I would stick with it,” said Laporte from his North Bay home earlier this week.

“I turned out to be one of the faster guys at the school, so that’s kind of what sparked my interest into it. From there I’ve kind of just fallen in love with the sport and trying to get my times low enough to make it the national team is the end goal, to make the Olympics.”

The St. Joseph-Scollard Hall alum ran an impressive 10.5 second 100 meter which is not far off from the Olympic qualifying time.  That’s amazing since Laporte never even competed in sprint when he was in high school as he and his twin brother Will competed in long and triple jump events.

Laporte was motivated to work hard with his friend, who had been battling a deadly disease.

“He was really optimistic that he would beat leukemia obviously, and that we’d be at the Olympics together. That’s what we always joked around when I started training with him,” said Laporte, who battled a serious heath issue himself a few years ago.

“He ended up passing away in May of 2017, and the last thing he said to me, he texted me when he was in the hospital and he said ‘I better see you at the Olympics, bro’, that’s what he said.

“After he passed away I wanted to make that a goal of mine, and to make it to the Olympics for the both of us. So that’s been a huge motivator for me and hopefully, in 2020 you guys will see me at the Olympics. That would be huge. That’s kind of the push factor for me right now.”

That goal took another twist in August when he met Hockey Night in Canada icon Ron MacLean at the Airport in Calgary. Laporte told him about his hockey journey and his transition to becoming a track and field athlete.

“I told him what I’ve been doing with training at the University. He mentioned that the best trainer right now in Canada is actually in Toronto, and that would be Ben Johnson,” said Laporte about his conversation with MacLean.

“He told me to reach out to him and that he was training a few athletes right now, and that he trains NHL players in the offseason. So he said to get in touch with him and then see if I could work something out with that. I got off the plane that night and I sent him an email, and within three days he got back to me and basically set up a meet-and-greet.”

So Laporte is expected to meet the former Canadian Olympian in Toronto on Thursday.

“I'm excited, because I mean he was a world champion at one time, so he’s basically one of the guys you look up to in the sport,” said the 28-year-old.

“I know I’ll be able to learn a lot from him; I just hope that I am what he looks for in a sprinter.”

However, if Johnson likes what he finds in Laporte, there is still another challenge and that’s the cost.

With Laporte never competing in a sanctioned race yet, finding funding and sponsorship as a sprinter is next to impossible.

“I’m just trying to make the journey easier, more feasible for me. It’s going to be a big week meeting Ben and getting everything sorted out that way, and I’ll find out which is the best avenue to go; whether I’ll move down - he’s training out of York university facilities right now.”

Laporte still isn’t sure whether York University will be the right place or perhaps moving back to Calgary to train as a non-student athlete at U of C again.

Whichever journey he takes, he knows his friend will be with him in Spirit on his quest to go to the 2020 Olympics.

With files from Hannah Knight

Plenty of masks used in Greater Sudbury on first day of mandatory mask use
Jul 9, 2020 10:00 AM
Comments
We welcome your feedback and encourage you to share your thoughts. We ask that you be respectful of others and their points of view, refrain from personal attacks and stay on topic. To learn about our commenting policies and how we moderate, please read our Community Guidelines.