From N64 to Virtual Reality, Geoffrey Taylor excited about the future of the video game industry

'Making effects for Darksiders II was so much fun because no one could say that something was wrong or didn’t look right when it's all stylistic, what mattered was how cool it looked. When you’re doing artwork that's based in reality and something is slightly off, everyone is going to notice'
Jan 19, 2021 1:00 PM By: Matt Sookram 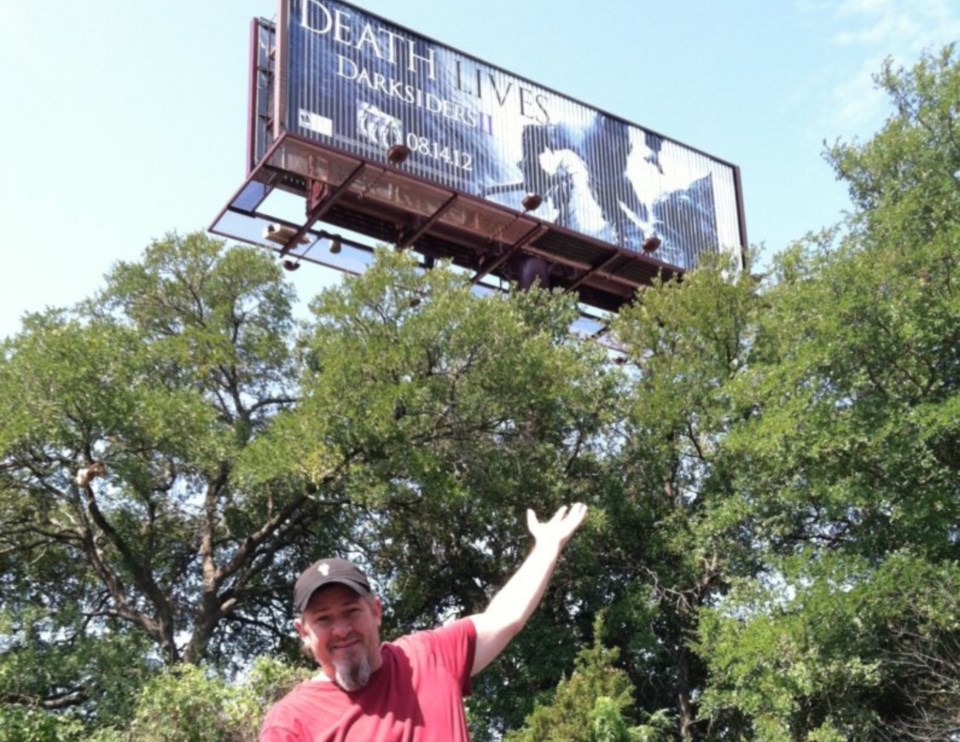 Geoffrey Taylor stands below a billboard with Darksiders II displayed, a game he worked on as a VFX Artist.

That is the figure senior market analyst Tom Wijman says the global gaming market generated in 2020, first reported by Newzoo.

Taylor is an Advanced Senior VFX Artist for Certain Affinity, a video game company based out of Austin, Texas. Taylor has been working in the video game industry for the last 20 years. Because of the pandemic, Taylor was able to relocate to the Gateway City and still maintain his position with the company.

“The owner of Certain Affinity is just a really solid guy. He wanted safety to be the priority no matter what, so in March he sent us all home to work,” says Taylor.

“Our IT department managed to move over 200 people into their homes. Our company could meet over Zoom and continue doing what we were doing, just not in the same space as everyone else. It proved to be quite successful, productivity went through the roof based on a number of factors and so they put out a survey asking who wanted to come back to the office and who wanted to stay at home permanently; well that piqued my interest.”

Born in Alliston, Ontario, Taylor’s family moved to North Bay when he was in grade school and he attended King George P.S. before going to West Ferris S.S. and eventually Canadore College.

He says a big factor in coming back home was because of his wife who is also from North Bay.

“She was an assistant director of a pre-school in Austin,” says Taylor.

“She loved her job but there were over 120 kids for the summer camp at their school. We were really concerned about the virus spreading. I phoned my boss and told him that I was really interested in pursuing the option to work remotely and in fact the company had opened a studio in Toronto two years ago and I asked if I could transfer there and then work remotely from North Bay,” says Taylor.

He got the green light to transfer and everything fell into place from there.

“Our house sold in two days after putting it on the market so we packed up and drove across the country. We got across the border and immediately quarantined at my brother’s house in Woodstock, then we headed north and eventually bought our house in North Bay. Within a few days I had my fibre optic cable all set up and it was as if I didn’t miss a beat.”

Taylor’s entry into the video game industry came at the very end of the 20th century after 10 years of his professional career as a graphic artist.

“I wanted to be a mechanical engineer, but my math marks were not quite good enough. I liked building things and was very creative so I entered the Graphic Communications two-year condensed course at Canadore College in 1987. There were no computers at that time, it was all hand done layouts and illustrations,” says Taylor.

But at the very end of his time at Canadore, one of his professors brought in his personal Macintosh Plus computer, and that allowed Taylor to gain some experience in the new wave of graphic design.

“Once I graduated, I got a job in Kitchener at an ad agency that was equipped with Macintosh Plus computers and so it was more manual drawing and sketching and layouts, but then using the computer to prepare your art for print. It was a very rewarding experience and if you knew your way around a computer at that time,” says Taylor.

From there he came back north to work as a graphic artist for Journal Printing in Sudbury where he would meet Thomas Coles who was operating a 3D animation studio.

“Mr. Coles brought in work samples for me to integrate into the design of his company's brochure. Mr. Coles and his business partners received a government grant to purchase Silicon Graphic workstations. Each computer was around $80,000 back then, it was a powerful, high-end setup. He showed me some 3D models that he had created and I was just blown away with how cool they looked and was really interested in knowing how they were made. We became quick friends along with the other people working at his studio and within about a month they gave me a key to the place and so I would go in after my day job and teach myself how to do 3D along with his help,” says Taylor.

“We were doing animations for TV commercials and that’s really where the doors started to open for me to get into 3D computer graphics.”

Coles eventually moved to Austin, working on an N64 game called Turok in late 1997, and that game sold over 1.5 million copies. Due to its success, the company Coles worked for was bought by Acclaim Entertainment at the same time as Taylor was moving down south, as he accepted a job to work for the same company as Coles.

“I was literally at the border on our way to Texas when I got notified of the buy-out. I’m with my wife, two kids, my dog, and all my worldly possessions in a moving truck 10 miles behind us and had to have the HR Department from Acclaim fax all the information to the border guard to let them know that it was still a legitimate job offer that I was accepting. It was very stressful, but we managed to pull it off through the eye of a needle” says Taylor.

From there he hit the ground running and got absorbed in some notable titles.

“The first game that I worked on when I got there was called NFL Quarterback Club. Our studio was doing a couple of sports games along with action titles; I was part of the sports division. I was hired initially because of my graphic arts background so my role was to design the User Interfaces. They needed someone who had the technical chops in 3D to build all the game systems such as meters, or time left in a game etc,” says Taylor.

Taylor says he wanted to be more than “the graphic artist guy” and eventually learned different disciplines which led to the full-time VFX artist position, “which is creating explosions, weapons, projectiles, environment effects, physic simulations, vehicle effects and so much more.”

Taylor has worked on many titles over the years, including; Pitfall Harry, Over The Hedge, Sharktales, Tabula Rasa, Epic Mickey, Call Of Duty, Halo, and Doom. But he says his favourite title to work on was Darksiders II in which The Four Horsemen - War, Strife, Fury, and Death, the player characters - are the last of the Nephilim, cursed fusions of angels and demons who waged war on all of Creation.

“It was gruelling hours, but I had so much fun on that game, and that was the turning point from being a UI/VFX artist to being a full-time VFX artist. I had a large network of friends working at every studio in town and my reputation kind of preceded me. The interview processes became easier and easier and really came down to how good your work was, who you knew and how hard you worked and there were people that just wanted to work with others who were going to put all their effort into the project ahead of them.

"On Darksiders II, I got to put headphones on and work really hard making fiery demons. I prefer working on projects that have a more stylistic art style. Making effects for Darksiders II was so much fun because no one could say that something was wrong or didn’t look right when it's all stylistic, what mattered was how cool it looked. When you’re doing artwork that's based in reality and something is slightly off, everyone is going to notice.”

And as the technology changes, the gaming community expects more realism, if realism is warranted and Taylor says that has put different kinds of pressures on those who work in the industry.

“It just blows my mind to see how far we’ve come, but the pure demand to make things more realistic now has quadrupled or more in the hours spent on each project,” he says.

Taylor says one of the highlights of being a game developer is being in that creative space of finding what is going to make your game fun and enjoyable.

“I got to witness this magical moment so many times where you’re trudging through the mud and you’re trying to get to that moment that your game becomes fun, and all of a sudden something clicks and sparks a new idea and everyone jumps on board and runs with it. It is very exhilarating to be part of moments like that,” says Taylor.

And those moments still happen all these years later, even if Taylor is over 2,900 kilometres away from the company’s headquarters. He says the ability to work remotely has “Changed the industry.”

“It has been proven that in some cases, you don’t really need to be in an office environment. It means if one wanted to, they could work on projects from around the world. Before the pandemic, there was a belief that you had to be in the studio, and now that’s just not the case.”

“We’re like guns for hire. Seasoned pros hired to help large successful game companies make their AAA games. Games like Halo, Doom, and Call of Duty are well-established titles where there is certainly room for creativity but they also want you to stay within the boundaries and fiction of their game while working hard to push it toward something new.”

New is the operative word for the gaming industry as consumers are constantly looking for that next form of entertainment and Taylor says it is something he truly embraces.

“I started in this industry during the N64 era, and when I see how far the technology has come since then, I’m amazed. The talent level is so high with the people entering the industry; I can't wait to see where we go from here. VR, augmented reality, more computing power, it is an exciting time to be making games. I feel lucky that I'm able to follow a passion I've had since my first quarter spent on Space Invaders."

More Jobs of the Future