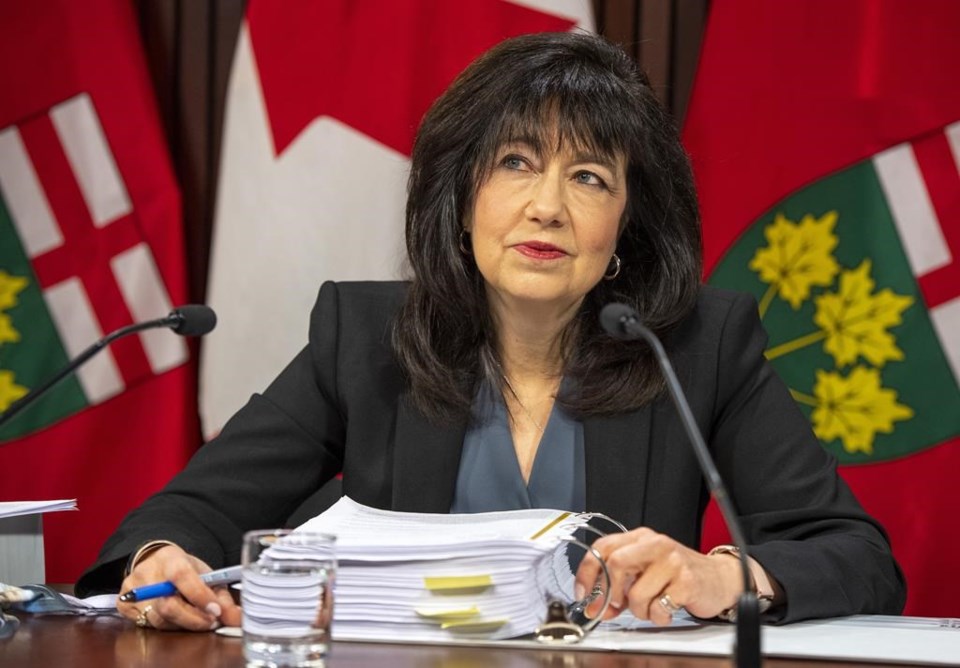 TORONTO — Ontario's nursing homes were woefully unprepared for the onslaught of COVID-19 – the culmination of years of neglect and failure to address known problems, the province's auditor general said on Wednesday.

In a special report, Bonnie Lysyk took aim at overcrowding, poor ministry oversight, and a severe staffing shortage that existed even before the pandemic struck.

Both the provincial government and nursing-home sector had failed to heed lessons learned from the SARS epidemic, while concerns raised repeatedly for years went unaddressed, her report said.

"Long-standing systemic problems in the sector were quickly and starkly amplified at the onset and during the first and second waves of the pandemic," Lysyk said.

"Neither the Ministry of Long-Term Care nor the long-term-care sector was sufficiently positioned, prepared or equipped to respond to the issues created by the pandemic in an effective and expedient way."

COVID-19 hit Ontario's long-term care homes with brutal effect last spring. In all, the disease killed at least 3,756 residents and 11 staff. At one point, the military had to go in to help the worst-hit homes.

While vaccinations have now blunted the impact of COVID-19, the sector remains vulnerable, Lysyk said.

Crowding was among key factors that contributed to the devastation between March 19 and Aug. 31 last year, the report finds. Almost two-thirds of residents were living three or four to a room in homes where more than 30 per cent of residents were infected at the same time.

However, neither the ministry nor local health agencies responsible for placing residents knew how many people were in three- or four-bed wards.

The report notes 761 patients — an unusually large number — were transferred from hospitals to nursing homes in March 2020, exacerbating already serious crowding in homes struggling to control the spread of COVID-19.

Another key issue was the lack of staffing and staff training pre-pandemic.

"The staffing shortage peaked in late April, when 36 homes — ranging from a small 56-bed home to a large 300-bed home — reported critical shortages to the ministry on the same day," the report said.

The report also noted that 13 of the 15 homes with the highest numbers of COVID-19 deaths were operated by for-profit entities. The 15 homes had only 4.4 per cent of all long-term-care home beds but accounted for 28 per cent of all resident deaths.

Those include requiring operators to renovate and upgrade homes more quickly, and coming up with a provincial strategy to address "root causes" of staffing shortages. It also urges development of a pandemic plan for the sector.

The report notes infection prevention and control was inconsistently practised even before the pandemic. Between January 2015 and December 2019, ministry inspections cited hundreds of incidents of non-compliance at about two-thirds of all homes.

At the same time, enforcement was "problematic," culminating in the government scrapping comprehensive inspections in the fall of 2018. Instead, inspectors focused on the growing backlog of critical incidents and complaints by issuing more compliance orders.

"Despite this increase, the ministry still had not implemented our 2015 recommendations aimed at addressing the issue of repeated non-compliance," the report states.

Restrictions that barred relatives from visiting loved ones in nursing homes "eliminated a valuable source of resident care providers," the report said. While the measures were aimed at controlling outbreaks, residents and families suffered, the report said.

"This lack of contact took an emotional and physical toll on residents and their families, in many cases resulting in a deterioration in residents’ physical and mental condition."

The report urges regulation of personal support workers, something the government this week took steps to implement.

The licences for more 26,500 beds in 257 of the province's 626 long-term-care homes will expire in 2025. However, the ministry could not say how many of the beds would need to be renovated to comply with the current two-bed room standard.

The report notes the health-care issues of residents have become more complex over the previous 10 years as has their need for personal support workers.

About one-third of residents have severely impaired cognitive abilities and 64 per cent have dementia. More than 85 per cent of residents need extensive or 24/7 assistance.

This report by The Canadian Press was first published April 28, 2021.