COTABATO, Philippines — Dozens of Muslim militants occupied a public market overnight in the southern Philippines before fleeing after a tense standoff with government forces, officials said Saturday.
May 8, 2021 9:20 AM By: Canadian Press 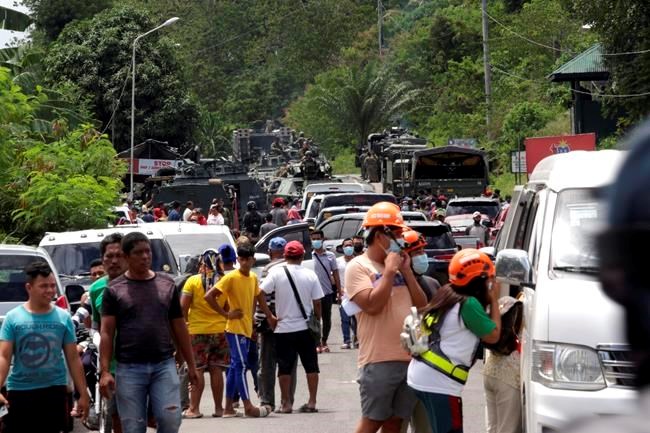 The Bangsamoro Islamic Freedom Fighters did not take any hostage or put up resistance when army troops and police took positions at dawn Saturday near the public market in the farming town of Datu Paglas, said military spokesman Lt. Col. John Paul Baldomar.

“They went into the market and stole food but got stuck inside when they saw that our forces have taken positions to ensure other buildings could not be threatened,” he told reporters.

There were no immediate reports of injuries or deaths.

The rebel group broke off from the Moro Islamic Liberation Front, the largest Muslim rebel group in the south, after it entered into peace talks and later signed a Muslim autonomy deal with the government in 2014. The breakaway guerrillas have continued sporadic attacks and bombings, with some aligning themselves with the Islamic State group.

Baldomar said government forces locked down the town , where the public market is located, and closed a highway at the height of the hourslong rebel occupation of the market. After the gunmen fled in batches following talks with local officials, soldiers found at least four homemade bombs placed by the rebels along the highway. Troops were pursuing the gunmen, he said.

Datu Paglas Vice Mayor Mohammad Paglas, however, gave a different account and told reporters that the mostly young Muslim rebels arrived on board five trucks in the town Friday to rest and mark the holy fasting month of Ramadan. He added some of the gunmen have relatives in the town in predominantly Muslim Maguindanao province.

“A big number of gunmen arrived and told us they just wanted to take a rest since it’s Ramadan. We allowed them," Paglas said.

When troops and police, some on board personnel carriers, arrived, the rebels were forced to retreat into the public market for cover but allowed people to leave the building, he said.

Paglas said there was an exchange of fire before the rebels fled, as requested by local officials.

Baldomar said some of the gunmen opened fire on civilian motorists, who were trapped along the highway. The motorists later managed to flee with the help of the military, he said.

Government forces have been on alert in the south, homeland of minority Muslims in the largely Roman Catholic nation, after hundreds of mostly local militants with some foreign supporters linked to the Islamic State group laid siege on southern Marawi city in 2017.

They took over buildings, including banks, school campuses and a hospital, before troops quelled the insurrection after five months with the help of surveillance aircraft deployed by the U.S. and Australia. The audacious attack at the time reinforced fears that the IS was gaining a foothold in the Southeast Asia despite battle setbacks in Iraq and Syria.