LONDON — Police in Northern Ireland have appealed for calm after officers were attacked with petrol bombs and cars were set on fire during a second night of unrest.
Apr 4, 2021 11:23 AM By: Canadian Press 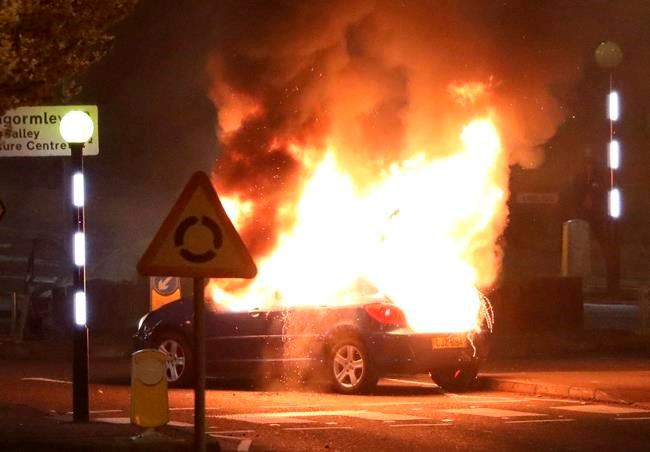 LONDON — Police in Northern Ireland have appealed for calm after officers were attacked with petrol bombs and cars were set on fire during a second night of unrest.

Three cars were hijacked and set on fire Saturday night in Newtownabbey, an area on the outskirts of Belfast, police said.

A 47-year-old man was arrested and remained in police custody.

On Friday night, 27 police officers were injured and eight people were arrested during riots in Belfast and Londonderry. Police said they came under “sustained attack” from a large group of young people throwing stones, bottles and fireworks.

The Police Federation for Northern Ireland called for an end to the violence and said people destroying their own communities was “not the way to protest or vent.”

Tensions have flared as some members of Northern Ireland's legislature sought to censure two dozen politicians from the Irish republican Sinn Fein party who attended the June funeral of Bobby Storey, a former head of intelligence for the Irish Republican Army. Officials recently said they would not prosecute the politicians for alleged breaches of coronavirus restrictions.

All the main unionist parties have demanded the resignation of Northern Ireland's police chief over the controversy, claiming he has lost the confidence of their community.

Northern Ireland’s first minister, Arlene Foster, has urged young people not to “get drawn into disorder” and refrain from attacking police.